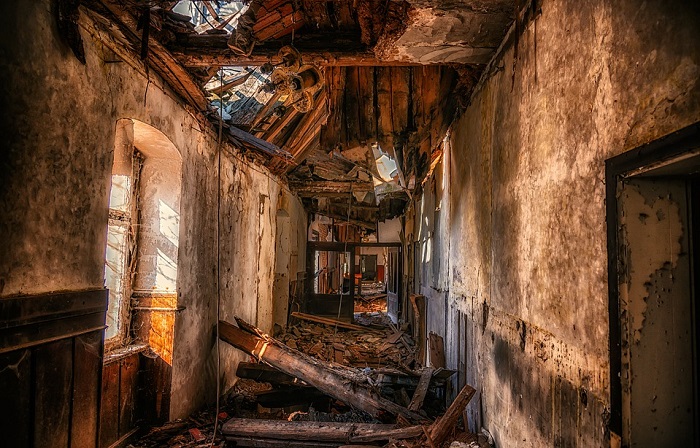 What is the catastrophe scenario that scares you the most?

Is that deep sea, the plane that is falling down, maybe a tsunami, or a meteor… there are so many disaster scenarios, more than we can think of.

All of them are not likely to occur like ever during your life. The chances are astronomical, but there is one place where we can almost experience them, and it may seem like a real deal, causing real feelings, terror, fear, and helplessness.

It is a dream world, where anything is possible, and dreams of such kind are very common, maybe more common than you could ever imagine.

And think – all of us had at least one of these dreams that made a lasting impact on us.

In this category falls the dream of building collapsing. There is one survey that showed that deals with this motive become more common after 9/11…

It is the dream that is truly scary, and the question is, what does it mean when you had it?

To dream that a building is collapsing can have different interpretations, of course, depending on how we dreamed of it.

What kind of a feeling we had while the dream lasted also changes its connotation? Try to recall as many details as you can.

This is not a pleasant dream at all, especially if you are in a multi-story building that has started to collapse; it is the feeling of panic, dread, and pure horror that is all around you.

This is the type of dream that can easily get you out of bed – and we are certain that when you had it, you woke up in a sweat, thanking God that this was just a dream, not a reality.

In a version of a dream where you have to see yourself in a building that started collapsing, and you didn’t manage to escape from it in time, it could mean that you are the type of person who doesn’t like to risk a lot in life. You follow the paths you know and don’t like them to turn in fear of going astray. You are a person who does not have too much life experience, and you have always had a better sparrow in your hand than a pigeon on a branch, which is your life motto. You will never risk anything because you are drowned with fears that you are losing what you have, even if you are not happy with what you have currently.

This dream, in fact, speaks of your accumulated dreams and desires that you are too scared to pursue, so you feel like you are collapsing. In this sense, you are the building that appears in a dream.

However, if you dreamed that you were in a building that was starting to collapse and you managed to save yourself by jumping out of the window of one of the apartments and hanging on a tree, you are a person who is not afraid to try something new and to deviate from the path she knows in order to gain some new life experience, be it bad or good. You are an adventurer and a favorite in the society that surrounds you.

If you dreamed of being in a collapsing high-rise building and you saved yourself by simply flying off it, it could mean that you are an open-minded person for whom there are no obstacles.

It is not difficult for you to do anything for yourself or for others, and you will go far in the future.

But, here there is something that is much more important, in the sense that you are aware of how much is important to risk in life because you will sometimes lose and learn from it, but you will gain even more, more than you could ever imagine.

Even more, it is the life you love to live, with your wings spread and without a plan, waiting the last minute to do it.

To dream of watching a building collapse from afar may mean that you will be able to help someone and do nothing about it. You will probably refuse to help someone who has done you any harm in the past and are now watching her fall. The advice is to try to gather strength and provide help, regardless of your past.

However, it will sometimes bother you, and you will not have a peaceful sleep since you are a conscientious person. Forgive, but don’t forget.

This dream is so important for the process of understanding what is good and bad when to help, and more importantly, when to back off and move away.

Those who are able to do it to make this difference are considered to be very happy, and it is mandatory not to overthink it.

There are some more versions of this dream where the main motive is collapsing buildings.

For example, the one where you have a dream that the building collapsed while you were walking down the street next to you, and you remained uninjured. What a dream, what an amazing symbolism to look at!

Such a dream may suggest that you will avoid an accident in the waking state without even being aware of it.

The average person walks about ten thousand steps a day, crosses the street at least ten times a day, and spends an average of an hour a day behind the wheel.

The probability that something will happen to us is high, and by sheer luck or God’s will, you will soon avoid such a situation.

The most important thing here, regarding this dream, is the fact that you realize that there is a greater force than we are and that we must show respect to it, by all means. There are things that are bigger than we are.

Decoding the Dream about the Building Collapsing

To decode the dream about the building collapsing, it is important to speak of one more version that is very common.

It is the version of a dream where the building has already collapsed, and you see yourself buried under a collapsed building.

Such a dream can mean that you are overwhelmed by problems, both your own and others. You’ve bitten more than you can handle, and now you can barely make ends meet.

If you managed to get out of the rubble on your own, seek help to solve the situation, and if you are stuck under them and struggle to get out, you would find yourself solving problems.

To dream of watching the collapse of a building for which you are responsible, by setting up an explosive device or whatever, means that you have had a situation in your life in which you left the care of resolving it to others, and they have not been able to solve it for a long time.

To dream that an ion is hitting a building and collapsing because of it may mean that you will not be able to avoid some financial collapse. It is possible that you or one of your employees does not manage the company’s finances properly, and it is even possible that some money has been embezzled. Try hiring a third party to deal with this problem to get a complete picture.

Dreaming that a building is collapsing due to a landslide can mean that you are in an argument with a loved one because of your poor financial status. You have probably lost your job recently, and your partner is running out of patience in finding a new job.

Try to speed up this process as much as possible by applying for some jobs for which you are retrained and accept the first offer, but only as a temporary solution, because after that you will have a job that will be extremely well paid.

For the conclusion of this story about dreams that have a central motive, a building collapsing, there are some versions that scarier than others, and we may add, more terrifying.

An example is the version of a dream where a building that is filled with people is collapsing. Such a dream might mean that you are ready to change for the sake of other people and people you care about. You are a person who cultivates philanthropy in himself and humbly accepts all criticism directed at him, and always strives to be a better person. That is why you will achieve great happiness in life.

Dreaming that a building is collapsing because it was hit by a bomb can mean that you will get competition at work that will have a plan to take over your job. Don’t be belligerent and tactfully wisely prevent it on purpose.

To dream that a multi-story building has collapsed due to its age and dilapidation may be that now is the right time, but also the high time to make some changes in your life. You’ve probably swayed too much into the comfort of your home to stop limping how much you become unsocial and inactive. We advise you to go to some of the sports that are suitable for your age and go out in the city sometimes to meet some new faces. Who knows what is new from all this can result.

To dream that a building is collapsing due to a flood means that it is time to visit a doctor. You are not a person who is a hypochondriac, so running to the doctor for every little thing is the exact opposite, which in some cases can be dangerous. You should at least do a systematic check-up from time to time, just so you can prevent any of the ailments that threaten you and start prevention or treatment on time with a positive outcome.

If you dreamed that the building was collapsing due to a lightning strike, it means that you will soon receive some news that will upset you.

As you could have seen, dreams about building collapsing are not apocalyptic as you may think, knowing that in reality, we cannot imagine a scarier scenario than this one.

But the dream world is intriguing and weird at the same time, and its messages are never literal.

Always look deeper, and if nothing, face things that are scary for you.