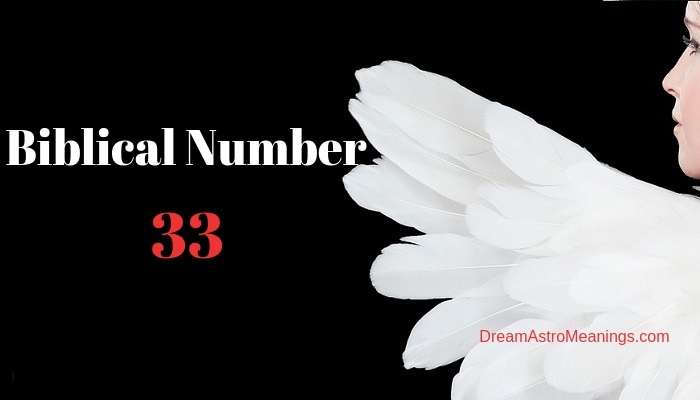 The pages of the Bible hide powerful secrets, a vast store of unexplored knowledge waiting to be unraveled.

Isaac Newton wrote more than a million words in an attempt to decipher the true meaning of the Scriptures, including a 1704 manuscript claiming that he had extracted occult scientific information from the Bible!

Corinthians openly says that parables have two layers of meaning: “milk for children and solid food for adults,” meaning milk is a diluted reading for children’s minds and solid food, the true message, accessible only to mature minds. “We both read the Bible day and night, but you read black where I read white.”

What Does 33 Mean in the Bible?

At the time of Pythagoras, six centuries before Christ, the tradition of numerology boasted 33 as the highest of all the Master Numbers.

He was the most sacred, symbolizing the Divine Truth. Jesus was crucified at age 33, although there is no historical clue to this, nothing is said about Jesus’ childhood and youth.

Nor is it coincidental that Joseph was supposed to be 33 years old when he married the Virgin Mary, or that Jesus performed 33 miracles, or that God’s name was mentioned 33 times in Genesis.

This number is registered in the texts and the tradition of various religions of the planet. The Bible states that King David reigned in Jerusalem for 33 years and that Jesus was 33 years old when he died on the cross.

It is also claimed that Hinduism has 33 thousand gods and that in Islam Muslims believe that the inhabitants of heaven exist eternally with an age of 33 years.

In addition, the Muslims themselves have 33 pearls for prayer.

In other religions, the number also appears, in Islam, all the inhabitants of paradise have eternally 33 years. The Bible contains the Old Testament, the New Testament, and a valuable collection of philosophical writings of Freemasonry.

The Bible and its mysteries as well as its infinite encrypted information are object of study and learning of the Masons.

The base of the spine, or sacrum, literally means “sacred bone,” the spine is composed precisely of 33 vertebrae.

The human science revered by Masons is the ancient understanding of how to use this temple for its most powerful and noble purpose.

Freemasonry reveres the unexplored potential of the mind, and many of its symbols are related to human physiology.

The two-headed phoenix with the number 33 is the emblem of the highest Masonic degree. In essence, grade 33 is an elite honor reserved for a small group of highly skilled masons.

All other degrees can be achieved by successful completion of the previous one, but ascension to grade 33 is restricted.

Among the advantages that numerologists see the number 33 we can highlight the fact that it is a number that attracts good vibes and inspiration.

People who identify themselves with the number 33 usually become the center of attention and are usually a figure to follow for several of the people around them.

Also, we must bear in mind that the number 33 is seen as the representation of universal love, so it is clearly a number that is related to balance and peace, as well as other qualities that often accompany people that inspire thousands or millions.

They are creative, honest, disciplined, witty and very faithful people. People who identify with this number often feel the need to improve everything they know, so they are seen as “reformers”.

They usually have very high missions or goals, which they will not be able to accomplish very easily.

However, once they get it they experience a great feeling of happiness and prosperity.

While the 33 is related to the intellectual and artistic skills of people, thanks to a kind of “master vibration” that allows human beings have the ability to attract cosmic vibrations to themselves that inspire other people, turning them spiritual leaders and great personages, also it is connected with the occult sciences and the paranormal phenomena, as they demonstrate the following events and data happened throughout the history of the man:

This number is registered in the texts and the tradition of various religions of the planet. The Bible states that King David reigned in Jerusalem for 33 years and that Jesus was 33 years old when he died on the cross.

It is also claimed that Hinduism has 33 thousand gods and that in Islam Muslims believe that the inhabitants of heaven exist eternally with an age of 33 years. In addition, the Muslims themselves have 33 pearls for prayer.

On the other hand, the area where the Tigris and Euphrates rivers meet, where the original location of Eden or Paradise would be found, is at latitude 33º 30’N, where Iraq is currently located, whose capital Baghdad is located at the latitude 33º 33’N.

This number represents the age of the Mastery in the Initiation of Jesus (his death, resurrection and ascension), apart from other esoteric details.

The “33” symbolizes the high degree of spiritual consciousness on the part of the human being. ”

Throughout the history of Humanity the number 33 has become a real enigma.

For many it corresponds to a magical number that has appeared in some of the most important events in history, from the time of Jesus Christ to the contemporary era.

According to numerology, the 33 – along with the numbers 11 and 22 – is a master number, charged with balance, spirituality and love in its purest expression, through surrender, sacrifice and compassion.

The Mayans would have discovered the mathematical nature of God in the frequencies of the numbers 13 and 20 which, added together, give 33 (the 13 represented as a circle and the 20 as a square).