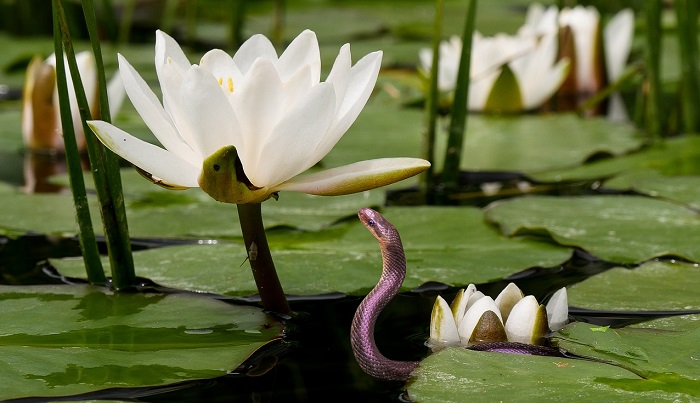 Snakes are elongated carnivorous reptiles without extremities. Their bodies are covered with overlapping scales. Their skull and their jaws are specially designed to enable them to swallow much larger prey than their heads.

Snakes live on every continent, except Antarctica. They can be land and water animals. It is estimated that around 3,600 species of snakes exist today. Their sizes range from tiny ones, of up to 10cm, to giant ones, of up to 13 meters.

Most snake species are not venomous. The ones, that are venomous, use their venom to kill their prey and they rarely use it to defend themselves. Some snakes have such powerful venom that can kill an adult human being almost instantaneously.

They are animals which are both admired and feared by most people. Some people are so mesmerized by these creatures that they risk their lives and keep them in their houses, as pets.

Snakes have an important and powerful symbolism which has evolved through millennia of human existence. Seeing them in reality usually has great importance for our lives and it is important to decipher it accurately.

Snakes have accompanied humans all throughout the process of evolution and there is various symbolism related to them. Snakes are considered to have dual symbolism, both good and evil.

The snake symbolism is very powerful. Snakes are considered powerful guardians in some cultures.

Snakes are considered a symbol of passion and sexuality in some cultures.

One of the most known snake symbols is the symbol of two intertwined snakes. Its origins are in old Sumerian, Mesopotamian and Assyrian art. In ancient times it was considered a magical protective symbol.

The snake has an important role in the history of Egypt. The Nile cobra adorned the crowns of the pharaohs since ancient times. It was worshipped as a deity. A symbol of a snake swallowing its tail was a known Egyptian symbol (Uroboros). 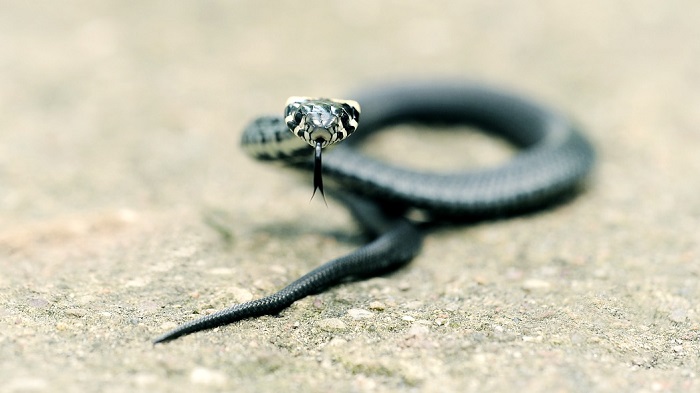 This symbol was later adopted by the early Christians and it continued to be used in medieval alchemy, only that a snake took a form of a dragon.

The ancient Greeks had a mythical creature, the Gorgon, which had a horrifying face and a hair made of snakes. That symbol was used to ward off evil.

The famous Gorgon described in Greek myths was the Medusa. Medusa had snakes instead of hair, and her gaze turned people to stone if they happened to look at her. Perseus, the famous Greek hero, killed the Medusa.

The Roman poet Ovid, in his book Metamorphoses described Medusa as the beautiful priestess serving to the goddess Athena. Athena turned her into a monster after the god Poseidon raped her in Athena’s temple.

The Greek poet Hesiod talked about the killing of the monster Hydra, a serpent with many heads, which was performed by the Greek hero Heracles.

Two intertwined snakes around a rod, known as the Rod of Asclepius, are a symbol of the ancient healing temples in ancient Greece, devoted to the god Asclepius, the Greek god of medicine.

Today a rod with two intertwined snakes is one of the main symbols of medicine. In ancient Greece, snakes or serpents were considered healers. The god Asclepius was often depicted carrying a snake entwined pole.

Snakes are very important animals in India. They are an animal worshiped in this country.

Some temples in this country are devoted to cobras, which is called the King of all snakes.

People in India believe that snakes are a symbol of fertility. In Indian mythology special kind of snakes exists, that can shapeshift into any living being, but they prefer taking on a human form.

These snakes are believed to possess a gemstone which is called Mani. Greedy people try to get a hold on this gem and are killed while trying to do that.

Snakes were often considered guardians of sacred spaces such as temples. The symbolism probably comes from the defensive upright posture some snakes take when they are threatened, and fiercely attacking their opponent.

Snakes are worshiped in the Hindu religion. Lord Shiva is often depicted with a snake around his neck. Many Hindu myths have stories about snakes. Nāga is a term in Buddhism and Hinduism used to denote entities which take on a form of large snakes.

The snakes are important religious symbols in ancient religions of Mesoamerica. They have a lot of deities which are a combination of snakes and other animals, like Quetzalcoatl, Mixcoatl, etc. In the Maya and Aztec calendars the fifth day in the week was considered the Snake’s day.

In Judaism, shake symbols were also considered as symbols of healing.

In Christianity, the snake is often seen as a symbol of evil and the devil’s temptation. The most notable is the story of Adam and Eve, and the snake tempting and deceiving Eve to eat the forbidden fruit from the Tree of knowledge in the Garden of Eden.

It is believed that Saint Patrick expelled all snakes from Ireland while converting this country to Christianity in the fifth century.

The Biblical prophet Moses turns his staff into a snake and back, demonstrating the power of God.

The snake is also mentioned in the New Testament, in the Book of Revelation, where it is depicted as the Devil.

Meaning of Seeing Snakes in Reality

According to their general symbolism, seeing snakes in reality could have good and bad symbolism. The meaning can also vary, depending on how you personally feel about snakes and the circumstances when you encountered one or several of them..

Seeing snakes often symbolizes upcoming periods of great personal transformation and growth. You might experience changes in your emotions, spirituality or some physical changes.

Snakes are a powerful spiritual symbol. They are often a sign of spiritual development and awakening.

Seeing snakes could also indicate going through a difficult emotional period in your life and beginning the process of healing. Seeing a snake could be a sign from the Universe to take your life in your own hands and stop wasting time on things and people who are not worth it.

Deal with these issues in time and don’t allow them to be the cause of missing some wonderful opportunities which are worthy of you.

A snake’s appearance in your life could sometimes be a warning sign. Snakes are symbols of fear and they can indicate experiencing something unexpected which might change your life completely feeling you with fear and uncertainty about the future.

They can often be a symbol of something or someone you are afraid of and refuse to deal with.

Snakes can also be a sign of threats and danger you are not aware of, but they can also symbolize being betrayed by someone.

The snake might have appeared in your life to make you pay attention to this person and watch out for potential signs of betrayal and deceit.

Sometimes seeing a snake could reveal the process of personal transformation you are going through or you have undergone recently. It is usually a sign of your personal growth and changes for the better. You are gaining your full spiritual power.

Snakes are also a symbol of healing and if your health is not its best when you happen to see a snake, that event could be a sign that your health will soon improve.

The snake can symbolize some issues present in your subconscious and creating pressure and blockages in your growth. These issues could be related to your past or present life circumstances.

Seeing a snake could make you realize what these issues are and finally confront and deal with them so you wouldn’t feel their burden anymore.

These issues can be some past memories, hurts, traumas, some toxic situations you are dealing with on a daily basis, etc., but are contents which are highly disturbing to your psyche whether you are aware of that fact or not.

So next time you see a snake, it is important to think about possible unresolved issues and if there are some, deal with them for good.

Next time you see a snake, it will have a completely different symbolism for you, indicating your spiritual blossom.