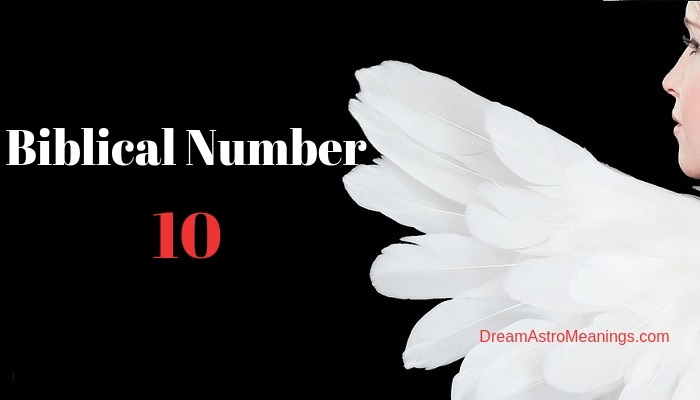 This number is used 242 times in the Bible, and the tenth word is mentioned 79 times. “Ten” is the number of man’s perfection. The man has ten fingers on his hands and on his feet. The old servant of Abraham took ten camels with him, on his way to the land of Rebekah to take a wife for Isaac.

After arriving there, Rebekah “brought (water) for all his camels.” The servant then gave him two bracelets that weighed ten cycles of gold.

Rebecca’s mother and brother wanted her to stay with them for at least ten days (Gen. 24:55), before leaving to marry Isaac. Rebecca, however, decided to leave immediately.

What Does 10 Mean in the Bible?

In this beautiful story we see how the marks of number ten are found as the number of ordinal perfection. In the parable of the ten virgins (Mt.25), the number ten represents the legal number necessary for a Jewish marriage. Ana was sterile before the birth of Samuel; Her husband comforted her by saying, “Am I not better than ten sons?” (1 S.1: 8).

In the temple and in the palace of Solomon we find the ten everywhere in the measurements of the various parts of the buildings (1 R. 6-7 and 2 Cr. 3-4). The ten sons of Haman were hanged on the gallows (Esther 9:14).

This serves as an excellent interpretation of the verse: “But those who belong to Christ have crucified the flesh with their passions and desires” (Galatians 5:24). If Haman is a type of the flesh, then his ten sons represent the perfect manifestation of the flesh in his passions and lusts. “Wisdom strengthens the wise more than ten mighty men in a city” (Eccl 7:19). Not wanting to be contaminated by the king’s food, Daniel asked the head of the eunuchs: “I beg you to test your servants for ten days, and give us vegetables to eat, and water to drink” (Dan 1:12). ).

Ten days later, their appearance was better, and they were more robust than all the other young people.

Ten lepers were cleansed by Jesus, but only one of them came back to thank him. Then Jesus asked him, “Are not they the ones who were cleansed? And the nine where are they? “(Luke 17:17). A perfect number of sinners was saved; How many praises and thanksgivings are offered to the Lord?

Are you looking for information about the meaning of number 10 according to the conclusions obtained by numerology and Cabbalism? Well keep reading because we tell you all about this number below. The number ten represents fullness, precision, virtuosity. In a word: perfection.

Already the ancient peoples counted on the fingers of their hands and, when they reached ten, grouped their multiples.

Although the first to use the so-called “base ten” in mathematics were the Egyptians, in Pythagorean philosophy the number ten was taken as a synonym of perfection, relating to the Supreme Being.

Thus, the tetraktys or triangular figure formed by ten points classified in four rows (each one with a numbering of one to four points in each row), was a fundamental mystic symbol for the Pythagorean religion.

Currently, using the decimal system, we usually organize any account in groups of ten, accustomed to using the fingers of our hands.

In the tarot, the number ten is represented by the famous Wheel of Fortune, which means that each turn gives a new opportunity to life.

Therefore, the meaning of number ten is linked to a high capacity to achieve everything that is proposed by those who identify with it, assuming all the risks they find in their path to achieve their objectives.

These people will do everything with a hundred percent effort, or they will not do anything. It could be said that its maxim is “all or nothing”.

The mathematician Leibniz said that the number one as a symbol of unity represents God and that zero represents nothingness, thus arriving at the conclusion that God created the Universe from nothing.

In Christianity the number ten is repeated in innumerable situations: the Ten Commandments, the ten plagues that struck Egypt … In addition, ten are the ancestors that Adam and Noah share, and there are also ten between Noah and Abraham.

For the Hebrews, the Yod, which is equal to ten, is the first letter that forms the name of God. Likewise, at present ten has been established as the highest note in the usual scale between zero and 10, that is, perfection.

The people related to this number are strong and determined. Energetic Many times charismatic. And it is thanks to these positive characteristics that they usually succeed in everything they set out to do.

Our dreams very often have a symbolic meaning and can reveal a lot about us and our personality. The most meaningful dreams always include those in which numbers play a role.

So the number 10 is also an important dream image. In the dream, we may see it as a written number on a sheet of paper or on a wall.

Sometimes we also have an object in tenfold execution or repeat a certain action ten times in a row.

But how exactly is this dream symbol being interpreted? What does the number 10 in the dream mean?

Basically, numbers in the dream can represent a message of the subconscious mind. In this case, they often refer to important data that threatens to forget the person concerned. Maybe a close person will have a birthday soon, on the 10th of next month? Or is there an important business appointment?

The dreamer was to start swiftly after awakening to think about what the dreamed number ten wanted to call him. Most likely he will be able to remember this in time. In addition, the written number 10 can stand as a dream symbol for a fresh start.

Perhaps she was dreaming on a sheet of paper or was the result in math lessons and stood on the blackboard. The person concerned then realigns himself in life and develops new plans for his future. He wants to learn from his already gained experience.

If he sees himself in the dream ten times and the same object in front of him, this is a sign that his will to change results from the previous chaos in everyday life. The dreaming grew up to the last various matters over the head. He is now anxious to avoid this excessive demand.

If, on the other hand, he repeats a thing ten times in a dream, the opposite is generally true: In this case, the dream symbol “Number 10” shows that he wants to escape a monotony that has arisen. The affected person wishes for more variety and challenges for his future.

“Ten” is the number of double responsibility in the direction of God and man. The man was responsible before the law to keep the Ten Commandments and be a witness of God.

Ten plagues fell on Egypt and Pharaoh in the days of Moses (Ex 7:12). Boaz asked ten men among the elders of the city to serve as witnesses that he was the redeemer of Ruth (Rt 4: 2).

In Luke 19, ten servants received ten minas from the hands of their lord to negotiate with them. One of them gave ten times more to the mine that was entrusted to him and was rewarded by receiving authority over ten cities.