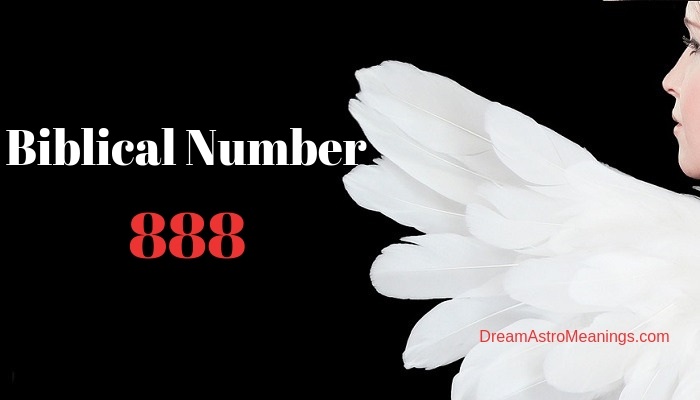 8 is the number of balance, justice and renewal. The number 8 represents the beginning of something new.

The eighth day is the beginning of a new week. In the musical scale with the eight starts a new octave.

In many cultures the 8 is considered the bond of union that relates our world with another better, bigger and much more developed world.

The octagonal star and the figure of the octahedron symbolize the union of these two worlds. In today’s text we are going to talk about the symbolism of the number 888 in the Bible and in general.

The Christmas star that announced the birth of a new era in the history of man had an octagonal shape.

The survivors of Noah’s Ark were 8 human beings and were in charge of starting a new beginning. A large number of baptismal fonts are octagonal in shape, the place where Christians begin a new path to eternal life.

The 8 represents the transition between the earth and the sky. The real crown with an octagonal shape is a good example of this. The emperor or king who wears the octagonal crown acts as interlocutor between God and the people.

In antiquity the number 8 was considered “the desired goal”. On its way to salvation the soul had to cross the 7 heavens where each of the 7 planets were.

At the end of the journey the soul reached the eighth sphere that was formed by all the immobile stars.

The eighth sphere was where the gods lived. In the Nordic culture we find Odin, the father god. To travel between heaven and earth, Odin used a horse with a very interesting feature: it had 8 legs.

The number 8 written horizontally represents infinity as it shows us many versions of the first Major Arcanum of the Tarot cards: The Magician. For Pythagoras 8 meant the number of justice because it could always be divided into two equal parts. For this reason in the Tarot card number 8 is that of Justice.

The eighth card of the Tarot recalls the trial of the soul of Osiris, teaching that only balanced powers can resist. Justice is blindfolded because in its decision cannot influence everything that is visible. Everything that is unbalanced ends up being destroyed by the sword of Justice. Hence, his two main attributes are the balance in his right hand and the sword in his left hand.

With the number 8 representing Justice, we are facing the equitable distribution of all things, whether material or immaterial. Universally it is known as the number of the cosmic equilibrium.

It is the number of the Rose of the Winds and the number of spokes of many of the wheels, such as the Celtic Rodezuela or the wheel of the Buddha’s law called Rueda del Dhamma. The arms of Vishnu are also eight that correspond to the 8 guardians of space.

Japan is one of the countries where 8 is most present. It was known in antiquity as the country of the Great 8 Islands. As a number indicating multiplicity, the 8 has become Japan in a sacred figure related to infinite wisdom. One of Japan’s most important national spiritual education centers located in Yokohama, it has an octagonal plan and is guarded by 8 statues representing the 8 most important sages. Observe that in all cases the letter N of the night, disappears when naming the number 8.

Naturally, human beings have always had the numbers in mind when they look at nature. The marine animals with eight limbs have come to take the name of that number, the octopods. But spiders and scorpions also have their famous “eight feet”, so in many cultures the eight is related to the poisonous and the traps of life. Traps that, like a spider web, cannot be seen until you are trapped in them.

The eight wants everything for nothing and for this the parasitic animals are a good example, like the tick and its eight legs with which bitter life of warm-blooded animals since Adam met Eva. In the exciting Numerology classes that Professor Lester gave us, number eight represented the figure of the “banker” and his key words were magnetic and cumulative.

Natives born under the vibration of number 8 are excellent executives with great innate powers to accumulate. The 8 has as its fundamental characteristic a great sense of financial and material values.

The biblical meaning of the number 8 is intimately linked to Jesus. It is a special mention number in the Bible; we can find it more than 80 times. It means “abundant fertility.” It is a number that represents abundance in general lines. The number 7 was considered the day of rest, and the number 8 became the number of the work already finished, the number of perfection.

The number 8 expresses everything that begins, that new, if the 7 is the finished work the 8 is the life that begins within that work. In addition, there are many coincidences with this number that we are going to point out: Christ was resurrected from the kingdom of the dead on the first day of the week. When the Earth was flooded by the flood, Noah was the eighth person to set foot on Earth to begin a new era. The Bible contains up to 8 resurrections, including that of the Saints.

Aaron and his children were consecrated in 7 days and began their mission in the eighth. The Feast of Tabernacles also lasted 8 days. There are 8 chants in the A.T that are saved to be sung after the resurrection.

We are faced with a number with a spiritual meaning that symbolizes everything that begins, that which was left behind and begins a new era full of illusion and perspectives. This number, not only has been seen as something exclusively biblical, it also appears in many cultures as a magic number that hides a special power.

In the great majority of these cultures, the number 8 almost always represents the same thing: the moment of the beginning. “The Levites were numbered from thirty years old and upward, and the number of them was by their heads, counted one by one, thirty-eight thousand.”

Allow this powerful number and its symbolism to guide you.

The number 8 balances the material and immaterial worlds. In the best of cases, it is as spiritual as it is materialistic.

The spiritual side of 8 is practical, realistic and intelligent. Know the difference between fantasies and genuine spiritual realizations. On the material plane, the meaning of number 8 focuses on the results.

Those related to number 8 are afraid to express their emotions because they fear rejection and harm.

Anyone involved with a number 8 will have to start any discussion about love or commitment, since numbers 8 will never be emotionally exposed if they are not sure of the answer they can receive.

Another biblical reference to this number, made after the 7 days of the Feast of Tabernacles, is an eighth day, called the Last Great Day. Also and according to what is read in Genesis, chapter 7, there were eight people in Noah’s Ark; Noah and his wife, their three sons, Shem, Ham and Japheth, and the wives of their children.

The number 8 in the bible represents a new beginning, that is, a new order or creation, and the true event “born again” of man when he rises from the dead to eternal life.

After 7 weeks of the spring harvest, the next day, day 50, is Pentecost.

This day is also the eighth day of the seventh week. This combination of days 8 and 50 illustrates the first resurrection when the saints will be resurrected from the dead and made immortal.