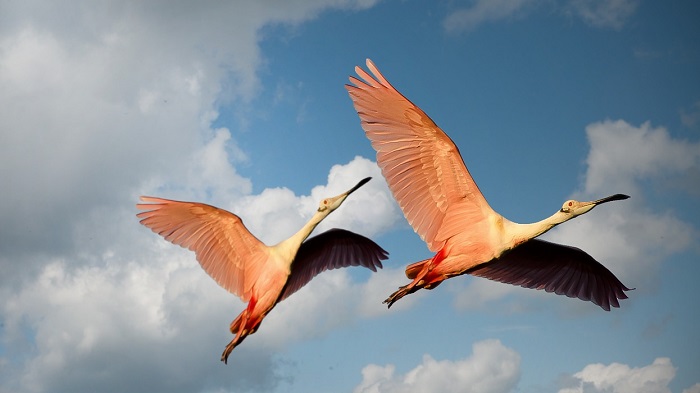 We’ve all heard the saying “be a flamingo in a flock of pigeons” and wondered what it means. To decipher the meaning of this saying, we need to start at the beginning.

Flamingos are beautiful pink birds with unusual pink colored feathers. They are also unique for their “standing on one leg” pose, which no one knows for sure what it serves for.

These birds can be found on almost every continent, but their uniqueness makes them a special experience for everyone lucky enough to see them in the wild. They live in large flocks and are very social birds.

Because of these traits and their uniqueness, they are considered a rare and unusual appearance.

On the other hand, pigeons are widely spread birds, as well, but they are a way more common sight than seeing flamingos. The reason is the fact they share their habitat with humans, unlike the flamingos which live in the wild.

Every one of us sees pigeons on a daily basis.

Pigeons are also beautiful birds, but in comparison to flamingos, they appear dull and uninteresting. The reason for that is the fact that flamingos are birds most of us see on scientific shows, or in movies, and we can see pigeons on every corner.

Pigeons are so habituated to living in human presence, that they almost don’t show any sign of fear even in close vicinity to people.

They can also be very annoying and are usually considered dirty and disease-carrying birds.

When these facts are taken into consideration, the conclusion is easy. Being a flamingo among many pigeons usually means, being different from the rest of people. Being different can mean many different things.

A flamingo can be considered as a symbol of something extraordinary, unusual, rare, interesting, amazing, challenging, inspiring, visible, pleasingly shocking, attention, respect, unexpected, never seen before, exotic, while pigeons symbolize the complete opposite. 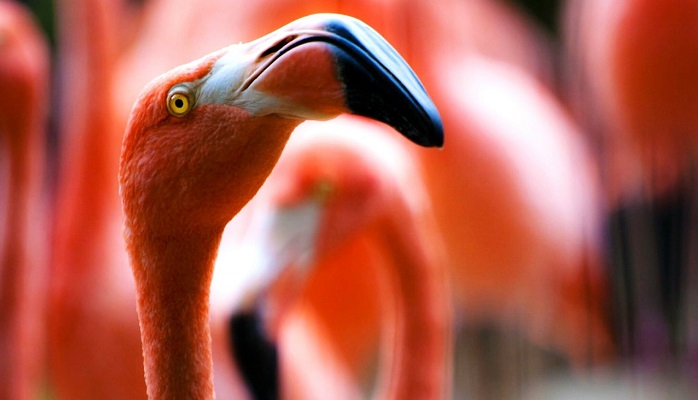 Don’t get me wrong. I’m not voting in favor of flamingos. Too much excitement and challenge can sometimes be overbearing and disturbing for ones’ peace. There are many blessings in the plain, common, and ordinary as well.

Primarily, they give us peace of mind and much-needed security.

The expression, “be a flamingo in a flock of pigeons” is easily applied to our everyday surroundings. We simply don’t see flamingos in our environment and on the other hand we are surrounded by pigeons, an environment where one flamingo would really stand out.

Flamingos are sociable birds, and they live in large flocks in the wild, and any bird, and that includes a pigeon, appearing in their flock would certainly stand out as well.

Being a flamingo among many pigeons simply means: stand out from the crowd. Be unique.

Don’t be afraid to express your individuality. It doesn’t mean to be vulgar and shock people with your appearance and behavior.

The phrase indicates something extraordinary and unusual among ordinary and usual things and circumstances. It calls us to be originals among many copies.

Most people have a flock mentality, and they desire to be a part of the crowd. They enjoy the security it offers. Most people don’t want, or they are afraid to stand out from the crowd.

They copy the ones they consider their leaders in some way. Most people are followers, and they need a role model to look up to. These days, with the availability and wide diffusion of social media, it is easy for people to copy one another.

It takes a strong character and developed personality and individuality, as well as natural creativity and ability to be different from the crowd and be unique and true to yourself.

Many people simply don’t want that, or they don’t have the ability or the confidence to stand out. And that is perfectly alright. We cannot all be geniuses, or creative, or super-models, etc.

Sometimes, standing out from the crowd doesn’t have to be a good thing. Too much eccentricity and diversity from others can cause people to avoid us, and isolate us from society.

As in everything else, you need to be moderate about your uniqueness. You don’t want to stand that much from the crowd that no one wants to hang around with you anymore, or people begin thinking you are a weird person they should stay away from.

There is a thin line between demonstrating your true self and appearing pompous and bigheaded. Sometimes being different can lead to other extremes. So be careful about that while you are trying to “be a flamingo in a flock of pigeons.”

People are social beings. We all need the support of our community. What good is your uniqueness to you, when no one notices it or considers you odd and unfit?

You should be aiming to inspire others to embrace their own uniqueness and individuality, and not consider it as something they should repress out of fear that their surroundings will reject them.

If this phrase is applied properly, it could be a motivation to overcome the curse of mediocrity and being satisfied with what is.

This phrase could encourage you to aspire for more, and not be afraid to follow your desires and dreams, no matter how impossible they might seem to others, or even to you.

It could be a motivation to go after your desires even if everyone in your flock thinks you are crazy.

This saying could also be an encouragement to be proud of your individuality and your special characteristics.

If there is something about you, that makes you different from most people, such as having more weight than average, having some speech disorder, or something similar, this saying could encourage you to embrace your differences and accept them as an integral part of your individuality.

Don’t be ashamed of them, but proudly present them as a part of your uniqueness. These traits are yours, and it is your job to make others accept you as you are. The sole way to do that is by accepting these traits yourself and loving them.

When you begin loving yourself entirely the way you are, others will start doing the same. Your diversity will become a reason for acceptance, not rejection.

To conclude, the saying “be a flamingo in a flock of pigeons” simply means, embrace yourself and your individuality and authenticity, and others will accept and love you for that.

No need to copy others because you already have everything you need inside you.