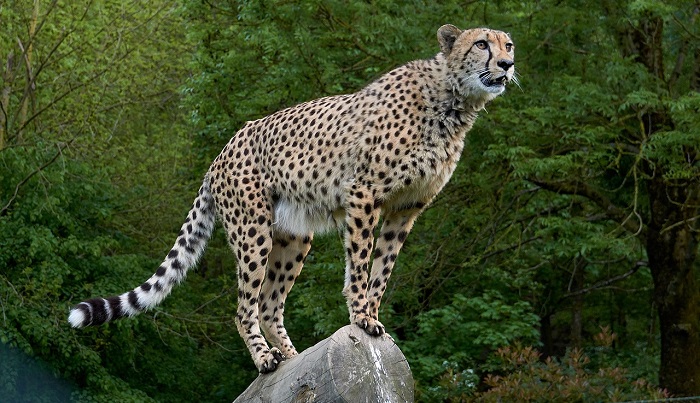 The cheetah is one of the big cats which lives in Africa and some parts of Iran. These species are now considered endangered due to loss of habitat, illegal trade, poaching and human threats.

This cat is considered the fastest animal on land. It has a slim elongated body, spots on its fur, small head, long legs and tail. These cats are light comparing to their body size. They are smaller than lions but taller than the leopards. They have almost 2000 black spots on their fur.

These animals hunt mostly during the day. The adult males form coalitions. Females are usually solitary or live with their young. Their main prey are gazelles and antelopes.

Cheetahs are stalkers and when they come as close as 300 to 100 meters to their prey they start chasing it. They trip the pray and bite its throat until they suffocate it.

These animals are extremely fast and can reach the speed of up to 112kph. Their average speed is up to 64kph.

The females give birth to usually three to five young.

As a totem animal the cheetah teaches you many useful gifts.

What does the Cheetah Symbolize?

This spirit animal is a reminder to prioritize and set our goals.

The cheetah symbolizes seizing opportunities and making the most of your chances. It also symbolizes alertness and confidence in your abilities. 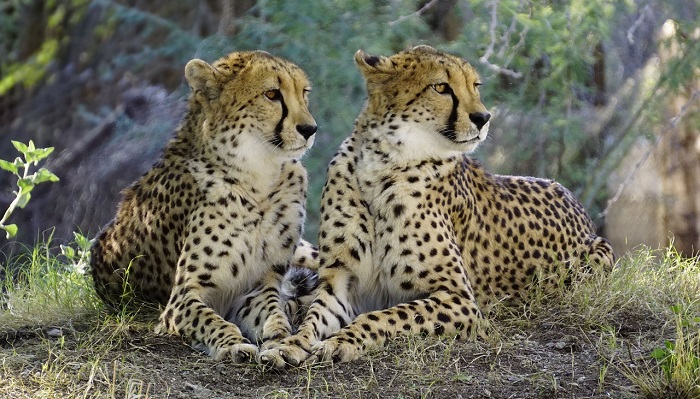 The Meanings of Cheetah as a Spirit Animal

The cheetah spirit animal has many different meanings. Here are some of them:

Speed action. The cheetah is the fastest land animal. Speed action is one of the main characteristics of this totem animal. The cheetah is calling you to act fast. Don’t waste your time and decide your goals for the future. If you already know what your goals are, begin acting to achieve them.

Survival and adaptability. The cheetah has perfected the art of camouflage. It has a fur which allows the cheetah to easily hide in the surroundings. That also enables it to stalk its prey until its close enough to begin its chase. This camouflage also helps this cat to hide from predators and survive.

Because of that the cheetah totem animal is teaching you the gift of adaptability and blending in all situations.

With the cheetah as your totem animal, you are most likely a very adaptable person capable to tune in to different circumstances without problems.

Opportunity and patience. The cheetah patiently waits for its opportunity to catch its prey. These animals run full speed to seize their opportunity. This totem animal is teaching you of the gift of patience and seizing opportunities. Never rush into things but instead wait for the right moment to ensure the success of your actions.

Focus. The cheetah’s main characteristic is to maintain focus until it catches its prey. It keeps speeding up until the prey is in its paws. As a totem animal, the cheetah is asking you to nurture the gift of focusing on things until you achieve them. Don’t disperse your strength and energy on too many things and end up not achieving any of them.

The cheetah teaches you to set your goals straight and go after the most important ones first. The cheetah is teaching you of the importance of maintaining your motivation for your goals to be able to successfully achieve them.

Selectivity. With the cheetah as your totem animal you are most likely a person who doesn’t have many close friends. Just like anything else you do, you also choose wisely who your friends are. The cheetah is asking you to beware of who you make attachments to.

It is better to be alone and wait for the right people to come into your life than to waste time on deceitful and untrustworthy people who call themselves “your true friends”.

Resting. The cheetah is taking its time to rest after its exhausting chase. The last seconds before the kill take most of its strength and energy. As a totem animal, the cheetah is teaching you to allocate your energy correctly. Don’t waste it on insignificant things, such as worry or quarrelling. Save it for something you can make a use of.

If you have been overwhelming yourself with too much stuff and duties lately, as well as doing other people’s chores or worrying about something, you most likely feel exhausted.

Protect yourself by taking time off from everything and everyone. You need to charge your batteries first.

Intuition and curiosity. The cheetah spirit animal is teaching you about the gift of using your intuition to get the answers you seek. It also teaches you to use your intelligence and your curiosity to find the right information needed to accomplish your goals.

You are most likely a person who already is very intelligent, intuitive and curious as well and you know how to use these gifts to get what you desire.

The cheetah is asking you to act fast and go after your desires as well as to confront your problems, so you can feel the satisfaction of success.

Activity. The cheetah is a very active animal. With the cheetah as your totem animal, you are most likely always on the move and doing something.

Isolation and solitude. Cheetahs are mostly solitary animals. This totem animal teaches you that it is good and useful to have some space and time to be on your own. You need to spare some time to devote it solely to your thoughts and needs. If you have a cheetah as a spirit animal, you are most likely a person who enjoys solitude and like spending time on its own.

You need time to retreat from others to contemplate about things that matter to you.

Probably you are also reserved towards people and don’t allow many of them in your life.

You have a few trusted friends and you are satisfied with that.

Determination. The cheetah is a very determined animal and cannot easily be stopped when it charges towards its prey. This totem animal is teaching you to be determined in all your actions. You need to have your goals straight, so you can put in all your efforts into achieving them.

The cheetah is giving you the gift of determination and the will to endure all the hardships while going towards your goals.

Cheetah as Your Totem Animal

The cheetah as your spirit animal is asking fast thinking and reactions. You are probably a person who quickly makes decisions and acts.

As a totem animal the cheetah is helping us determine our goals and remain focused enough to accomplish them. It is also teaching us the gift of adaptability and flexibility and reacting in the right moment.

This totem animal is asking you to not to waste energy but focus on the goals you can easily achieve. Take one step at a time. Make sure you plan your actions first and don’t act hastily.

If you have the cheetah as your spirit animal, you are most likely very compassionate towards others. You seem to feel when other people suffer, and you feel their pain.

You are a truthful and honest personality, but you have a gift of telling things in a pleasant manner. You seize opportunities fast.

You don’t have many friends because your trust is hard to gain. You tend to isolate from others.

What if the Cheetah Appears in Your Life?

When the cheetah spirit animal appears in your life it is usually to remind you to act quickly and seize the opportunities at your hand.

It could be an announcement of things speeding up in your life and reminding you to be attentive and watch for opportunities, so you don’t miss them.

The cheetah is asking you to focus on your goals and seek for opportunities to accomplish them.

When the cheetah appears in your life it could be a reminder to be more flexible and adaptable. The cheetah is encouraging you to discover your goals if you don’t know them yet. You need to know exactly what you want to be able to focus on it.

The cheetah is also asking you to organize well and prioritize your goals, so you won’t waste energy on doing many things at once.

If a cheetah appears, maybe it is an announcement of some new opportunities appearing and is reminding you to be alert and act fast, so you don’t miss them.

When to call on Cheetah?

You can call on cheetah spirit animal when:

Dreams about a Cheetah – Interpretation and Meaning

When you dream about a cheetah, the dream is often a message from your subconscious to take some action.

If the cheetah was chasing you, that might be a sign for you to begin moving towards your goals and stop postponing your actions without a reason.

The dream is asking you to stop wasting your time and go after your desires. This dream could also indicate your inability to overcome some current issues you are dealing with.

Maybe you are trying to get away from a situation, but you will eventually be forced to deal with it.

The dream about cheetah could be a reminder of how strong and enduring you are. It is asking you to remember how powerful you are.

In some cases, this dream symbolizes your tendency to lose interest fast and get bored easily.

This dream could also indicate your achieved success and it can symbolize the achievements that are yet coming into your life.

Sometimes a cheetah in your dream could indicate that you lack something in your life. Maybe you have some obstacles and challenges you need to face, or maybe the obstacles are appearing in your life when you decide to move forward.