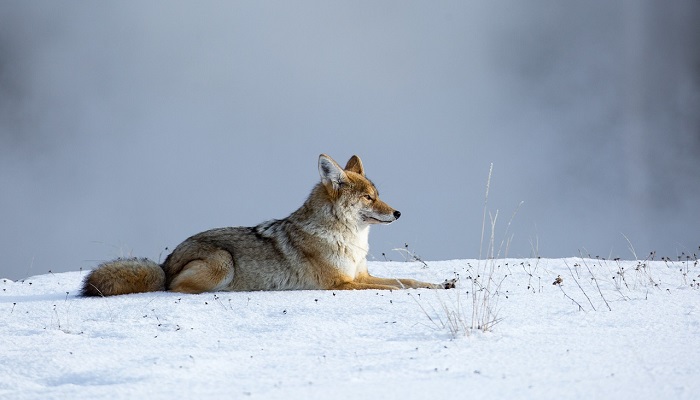 The coyote is a North American canine species. Coyotes are close relatives to the gray wolves, but are smaller them them. They are also related to the golden jackal from Eurasia. Some zoologists call the coyote the American jackal.

These animals are highly adaptable. Coyotes are increasing in range and moving towards urban areas. They live in family units which have a reproductive female or packs of unrelated members.

Coyotes are known for their specific howls, produced by solitary individuals. They sometimes mate with wolves and produce so-called “coy wolf” hybrids. Some species even evolved because of long time mating with different types of wolves. Coyotes sometimes mated with dogs, producing “coy dogs”.

These mattings rarely happen in the wild because these species have different mating cycles. Also, coyotes don’t like dogs. The hybrids have coyote’s characteristics. These hybrids are fertile and able to produce their own offspring.

Coyotes are depicted as tricksters in the folklore, especially Native American and Mexican. It is also considered an untrustworthy and cowardly animal.

When the female is in heat, males begin to follow her. The female chooses the one that she will mate with. The rejected ones don’t intervene and move on to find other females ready to mate.

Coyotes are monogamous animals. Females, who don’t mate, usually help their mothers and sisters around the young. The pair, who has mated, establishes its territory. Coyotes often occupy other animals’ dens or build their own. They use one den for years.

While the females are pregnant, males usually hunt alone and bring them the food. The pregnancy period usually lasts around two months, and they give birth to up to 6 pups.

Parents begin feeding them with solid food two weeks after they are born. The males are active in the feeding process as well as in the pups defending and grooming. When their teeth become functional the parents give them food such as rabbits, mice, etc. These pups engage themselves in rough plays.

Coyotes establish territories, ranging up to 62 km2. They don’t defend their territory, unless it is denning season. They are not conflicted animals but they do get into fight when food is scarce.

If they hunt some large prey, the coyotes do it in pairs or small groups. The coyote approaches its prey from the front, tearing up their throats and heads. If they hunt small prey, they do it alone. Some experienced coyotes even feed on porcupines. 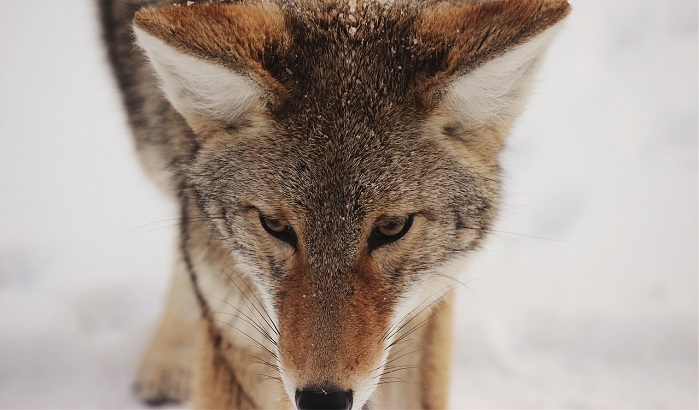 These animals sometimes form relationships with badgers, digging up rodent prey together.

They can be seen licking their faces or laying their heads on their badger friends. Such behavior is noted thousands of years ago.

Coyotes are both solitary and sociable animals. Their aggressiveness resembles more the one of a fox than a wolf. Adults fight only with the members of their own sex and the females are more serious opponents.

They have various vocalizations, such as huffs, barks, growls, woofs, etc. Coyotes are known for their lone howls and group howls.

These animals walk up to 16 km per day. Usually they are more active around evening than during daytime. They are good swimmers as well and can use water for their travels as well.

What does a Coyote Symbolize?

The coyote is considered a wise teacher who can teach us some hidden wisdom. It is also a symbol of humor, jokes, fun and trickery. This totem animal is asking us to look at the bright side of life and not taking things overly serious. The coyote reminds us to be playful and enjoy life.

The coyote is a teacher who doesn’t have a straightforward approach. He might be using humor or some trickery and jokes to teach us some important lessons. It is important to maintain our vigilance and understand what is trying to teach us.

This totem animal is asking us to look for signs of wisdom and hidden knowledge in any life circumstances we might experience.

Noting is coincidence and every life experience bears a lesson we can learn and apply to our lives.

The coyote also symbolizes life magic and creation of our desires. It gives us the wisdom to overcome the obstacles and survive when times are tough.

The Coyote Meaning as a Spirit Animal

The coyote totem can have many different meanings. Here are some of them:

Adaptability. Coyotes are extremely adaptable animals. They are constantly increasing in numbers. They survive in different habitats and if necessary, feed on leftovers. As a totem animal, the coyote teaches us to be adaptable and manage our ways in any kind of circumstances.

If this is your totem animal you are most likely very adaptable to new situations and change of environment.

You tend to get along with different types of people who consider you fun and interesting to be around.

Resourcefulness. Coyotes are resourceful animals. They easily manage to find resources to ensure their survival and the survival of their offspring. They eat a variety of foods, usually meat, but they also eat plants.

This animal as a totem teaches you to use all your skills and abilities to achieve what you desire.

Isolation and sociability. Coyotes are known both as loners and group animals. They often form small communities, usually family units or packs of unrelated coyotes. If this animal is your totem, you might have a divided personality as well. On one hand, you enjoy your privacy and spending time alone, and on the other hand, you enjoy being in the company of your family members, friends or mere acquaintances.

Skills. These animals are skillful hunters. They catch a variety of prey and they are known as skillful rattlesnake’s catchers. This animal totem gives you the gift of being skilled in your preferred areas and to use them to acquire what you desire.

If this animal is your totem you must be very skilled in your chosen profession and others look at you as an example.

Solidarity. Coyotes are solidary animals. It is noted that females who don’t mate, selflessly help their sisters or mothers raise their offspring. This totem animal is teaching you of the importance of helping others in need and being selfless about that. If you have a coyote as your totem animal, you must be like that as well.

People often rely on you to give them a hand when they are in some kind of need.

Communication. Coyotes have different vocalizations, which they use to communicate with each other about different things. The coyote as a totem animal gives you the gift of swift communication and being able to socialize with different people.

You always seem to know the subject they are interested in.

Divided personality. Coyotes are known to cross-breed with wolves and dogs. The animals that are born mainly have the coyote’s characteristics. They also keep some of the characteristic of the other parent.

Monogamy. Coyotes are monogamous animals and stay with the same partner for years. If a coyote is your spirit animal, it teaches you of the beauty of sharing your life with the same person for a long time.

With this animal as your totem, you are probably faithful and know how to appreciate the relationship you have with your partner.

The Coyote as Your Totem Animal

If a coyote is your totem animal, you are most likely a very adaptable person. You don’t mind if the circumstances change because you are certain that you will easily adapt to them. You are also very resourceful and know how to manage with the resources you have at your disposal.

You are probably a joker by nature and you love pranking others, especially your close friends and family members. You are a favorite among your friends and they enjoy spending time with you. It’s always fun to be around you.

People seek your company because they enjoy that. You are probably never bored and always have something interesting to occupy yourself.

With this animal as your totem, you never complain about the circumstances you are in; you simply look at the brighter side of the situation and go with the flow.

You are a loyal partner and friend. You are also very devoted parent and do your best to keep them safe and well nurtured.

What if the Coyote Appears in Your Life?

If the coyote appears in your life, that appearance might be an indication to slow things a bit and stop being overly serious. You should take a more relaxed approach towards life which is one of the messages the coyote brings into your life.

Maybe something has been bothering you for a long time, and the coyote is asking you to approach differently to solving that problem.

When this animal appears, you need to prepare yourself for some surprises. You could also unexpectedly acquire some knowledge and wisdom.

The coyote might also appear during times when you are experiencing some change of circumstances and you need to adapt to them. This animal also reminds you to look at the brighter side of life and laugh more.

Stop being tense all the time. Release your worries and let the Universe help you solve them. You need to enjoy life more.

Sometimes this animal appears in your life, to remind you to be more appreciative of your loved ones, especially your romantic partner and family members.

Show them you care about them and offer your help if they need it.

When to call on Coyote?

You should call on coyote as your spirit animal when:

Dreams about Coyote – Interpretation and Meaning

Often a dream about a coyote can indicate weakness and deception, but that depends on the other details of the dream.

This dream could indicate that you have been deceiving yourself about something and is asking you to stop doing that and confront your reality.

If the coyote was attacking you in your dream, that might indicate your negativity and expecting the worst to happen in some situation. use this dream as a warning to stop with such an attitude.

Sometimes this dream indicates some tragic events in your family.