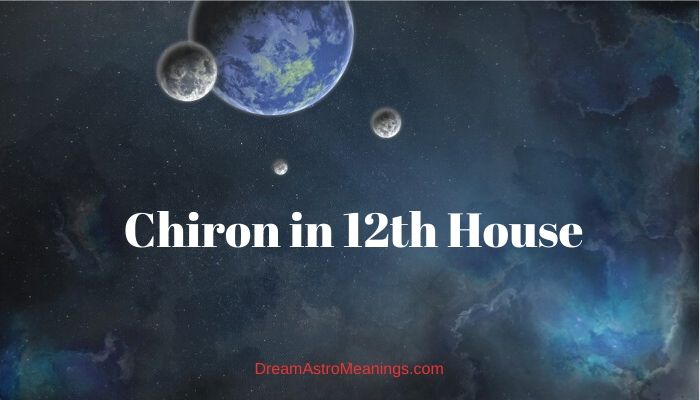 Chiron symbolizes the tear, the wound that which does not stop hurting us, but that for the same reason unifies us to the human condition.

Difficult positions in the 12th House can suggest old weaknesses and misused energies in previous lives and that we have yet to learn to use them wisely in the present.

Chiron is a small planetoid that was discovered in 1977, its eccentric orbit with an irregular trajectory oscillates between the orbits of Saturn and Uranus and it takes around 50 years to complete one revolution around the Sun.

Astrology draws on mythology to appreciate in greater depth the reason for the names given to each planet – or body in the sky – and from there understand the symbolism of the passage of that planet through each sign and how it can affect our birth chart.

The Greek myth tells that Chiron was the son of Saturn and Phi lira, it was the result of an unworthy union since Saturn was married to Rea – who surprised the lovers in full meeting- From his shame for feeling discovered and trying to escape Saturn became on horseback.

The product of this union – heartless and ashamed – Chiron, the first centaur, was born, born half human and half horse.

His heartbroken mother, after a painful and difficult childbirth gives birth to this being and frightened by the animal nature of her son, begs the gods to release her from the burden of raising this child. In response the gods take Chiron and turn his mother into a linden tree.

The story of the myth continues … the gods educate Chiron who becomes prudent and wise, possesses the gifts of a shaman, skilled in the healing arts, in the use of medicinal plants, also a teacher in the arts of war and instilled ethical and cultural values. Connoisseur of music and stars, prophet of high moral stature.

On a day of rest, Hercules accidentally wounds Chiron with an arrow with the poison of the Hydra, producing an incurable wound – even for him, who with his skills and knowledge will not be able to heal himself. The gods had granted him immortality.

Faced with such a contradiction, Chiron offers Prometheus to free him from the underworld (there condemned for stealing the fire of the gods to deliver it to men), exchanging the mortality of Prometheus to achieve – when he dies – stop suffering.

Surrender your immortality to free yourself from your pain. Here the myth teaches us to integrate death as a liberating part of life.

Chiron symbolizes the aspect of our life that is wounded from birth (Chiron is rejected by his mother), it refers to that area where we feel rejected, where we have limitations.

I am not talking about avoiding our wound by escaping to help others, because many people see it that way.

For something the myth of Chiron comes in three phases: evasion or victimization, self-help or transformation, and the transcendence of the wound through sharing the medicine with others. We cannot skip stages.

To explore The Medicine that hurts in your chart you have to locate the astral house, sign and aspects of Chiron (tutorial click). For example, I have Chiron in Gemini in house number 2 (self-esteem, physical body and material stability).

As a basic rule, the sign represents the what? And the house where? In my case the “what?” it is related to Gemini energy: Ideas, learning, siblings, perspectives and communication? In house two it means that my wound was installed in my self-esteem, body, and material security:

When I was 8 years old my little brother (brother = Gemini) died in an accident impacting my perception (Gemini) of safety in the world (2nd house) and generating a sense of guilt.

For effect, in adolescence I began to manifest an eating disorder (house 2 = self-esteem, body), thanks to which I began the path of personal transformation and evolution, which is now my vocation through the creation of content and coaching service and therapies (Gemini)

I tell you so personal so that you understand that it is complex and that the wound, as well as us, evolves and manifests itself with different symptoms throughout our lives.

Below I am going to leave you a general guide of what Chiron means by house and sign, but if you are interested in going deeper, I recommend taking a personal consultation in order to integrate it in a more specific way.

In House 11, the “I” learns and recognizes that it cannot have a full existence if it lives isolated, alone, only turned towards itself and to satisfy its needs. Isolated, it does not exist. To reach its full potential, the ego needs to relate to others, to integrate into the whole.

On the other hand, the ego also realizes that its connection with others and with the world has two meanings. He gives and receives. It is influenced by ideas and external currents, but it also leaves its mark.

We are influenced by others and others are influenced by who we are. We realize that when we are involved in common causes, we can make a difference, and we can contribute to the common good, to a more just society.

The notion that we exist as an isolated entity loses space for a broader sense of “I”. In the 12th House, the heart and soul become the means of expression of spirituality.

Unlike the 1st House, where the ego creates its identity from the intellect, in the 12th House, it is spirituality that shapes the “I”.

The rediscovery of our totality, our unlimited nature (only possible as a member of Humanity and not as an isolated being), infinite and eternal, becomes our greatest desire. We feel the need to be part of something bigger than ourselves.

On the other hand, the awareness of our finitude, the desire for preservation, and the fear of death contribute to this feeling.

Pisces, the sign associated with the 12th House, represents two fish swimming in opposite directions. The “I” also faces a dilemma.

On the one hand, you want to transcend your individuality and be a part of something bigger. On the other hand, he fears that by doing so he will lose his identity.

Power, prestige, love, sex are ways in which we find this feeling of eternity, of legacy. We can leave the job done or an offspring.

Prayer, prayer, connecting with the Divine is another way of finding the balance between individuality and reintegration and satisfying this need for transcendence, the feeling of being connected to a reality greater than ourselves that surpasses us as individuals.

By associating themselves with Pisces duality as well, people who are overly empathetic to the unhappiness and misfortune of others may adopt opposite strategies to manage this pain.

Either they take refuge in self-destructive behaviors (such as alcohol or drugs), withdraw from reality, or go to work and try to help. That is, they can become martyrs and saviors.

For those who believe in reincarnation, the human soul is immortal and its mission cannot be accomplished in a single lifetime. The upgrade is a long journey, which is not extinguished only in a brief passage on Earth.

In each reincarnation, the soul brings with it what it reaps from previous life experiences, as well as latent capacities waiting to be developed. What lives in previous existences affects what is in the present.

The soul is born again and its legacy of previous lives is represented in the birth chart that indicates everything that we bring from the past as what needs to be awakened in us to continue.

Difficult positions in the 12th House can suggest old weaknesses and misused energies in previous lives and that we have yet to learn to use them wisely in the present. Positive positions suggest strongly settled qualities, which become advantages in today’s life.

House 12 also has this connotation. That of the enemies we do not recognize and the activities that take place in the shadows.

According to the point of view of some astrologers, this association may mean not so much intrigue and external conspiracies, but a personal boycott.

In other words, the great enemy can be internal, we can be ourselves when we boycott ourselves, when we act against ourselves, due to lack of confidence, doubts, personal contradictions or fear. When hidden weaknesses or internal forces undermine the achievement of our goals and dreams.

Therefore, the positions of this House can be an indicator of the nature of the unconscious and the root of psychological problems. While the 8th House represents the way we can resolve these difficulties, the 12th House helps us understand their fundamental nature.

The human being lives between the conscious and the subconscious. There are attitudes and decisions that we make without really knowing why. They happen almost “naturally”, because they make sense to us, without a rational explanation of what happened.

For example, someone who wants to have a passionate relationship, who is terrified of being alone, but who does not want to give up his independence and the lifestyle that gives him this.

In this situation, the person may be attracted to those who are already in a relationship or who do not match their progress.

Basically, this is a choice that the subconscious makes. Since he does not want to commit (conscious), he is attracted to those who are not available (unconscious). The dilemma is solved.

Knowing the planetary energies that function in the 12th House, allows us to gain this awareness. It gives us the opportunity to be honest with ourselves.

It allows us to figure out who we really are and what we want for ourselves. In a way, it can help us unlock certain situations. Understand if what we really want is what we need, or if our subconscious, what is hidden, is working against us.

Another classic association with the 12th House is prisons and hospices. Hospitalization or a period of absence may be necessary to restore physical and psychological balance, causing the person to recover again, another principle of this House.

The passage through orphanages, hospices and the treatment of people with disabilities also appears in House 12.

As an expression of compassion and care for the less fortunate, positions in this House may also suggest the convening of activities such as working in a charitable institution, institutions of social solidarity or monastic life.

For those who believe in reincarnation, past bad karma can be redeemed through goodwill and this kind of humanitarian action.

Chiron symbolizes the aspect of our life that is wounded from birth (Chiron is rejected by his mother), it refers to that area where we feel rejected, where we have limitations.

In this House, we realize that what serves our personal well-being will serve the good of all.

After becoming aware of our individuality and going through a series of experiences, we acquire the notion that we are one with creation.

The rediscovery of our totality, our unlimited nature (only possible as a member of Humanity and not as an isolated being), infinite and eternal, becomes our greatest desire. We feel the need to be part of something bigger than ourselves.

On the other hand, the awareness of our finitude, the desire for preservation, and the fear of death contribute to this feeling.