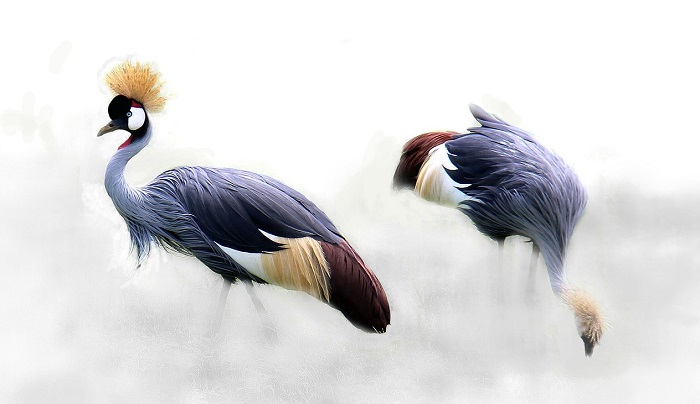 Cranes are beautiful birds, appearing very elegant and graceful with their long legs and their long necks. They are worldly spread, and can be found on every continent except South America and Antarctica. Today there are 15 existing species of cranes. Cranes are considered endangered birds.

They are very adaptable and can adjust their diet to the season and the available resources. They are both carnivores and plant eaters, and they can satisfy their food requirements with fish, small rodents, insects, grains, berries, etc.

Cranes build platform nests in shallow water. Both parents take care of their young, which is usually two chicks. The young stay with their parents until the next breeding season.

Some crane species are migratory while some aren’t. These birds isolate in pairs during the breeding season, and form large flocks off breeding season.

They are considered large birds, ranging from 90cm to up to 176cm in length, depending on the species. They have unusually long legs and necks. Males are bigger than females but they don’t differ much in their overall appearance.

Cranes have variations in feather color depending on their habitat. The ones living in open wetlands appear whiter, while the ones which live in forests and smaller wetlands are more greyish in color. White cranes are larger than the grey ones.

The feathers on their heads can be moved and erected, usually for signaling purposes.

The most variations of crane species occur in East Asia. Eight species live there. Cranes need large open spaces. They usually nest in wetlands. They are diurnal birds and usually very territorial. They tend to occupy their territory all of the time.

These birds are mostly social and tend to form groups of family members or large flocks.

They also travel together during the migrating season. Being in a large group is necessary for protection reasons as well but they also use it as an opportunity for birds to form pairs for later breeding.

These birds have different vocalizations. They even have calls for individual recognition.

Cranes can adapt their diet to the habitat they currently inhabit and the current season. The ones with the shorter bills usually search for food in uplands while the ones with the longer bills feed in wetlands. 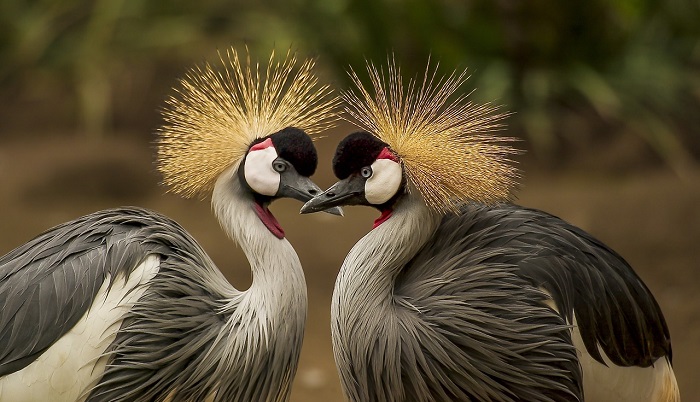 These birds are monogamous birds which form life- lasting bonds. They begin forming these bonds around their second or third year of life, but they don’t begin breeding immediately.

Their first breeding attempts usually fail, and in such cases, the new pair dissolves their bond because of that. Pairs breeding successfully remain together. The breeding season varies depending on the species.

Their territory also varies depending on the species, from one hectare to around 500 hectares that some species such as the red-crane require. A pair of cranes can even defend even larger territories which can reach several thousand hectares. Males are usually the ones defending the territory.

What does the Crane Symbolize?

Since ancient times, the beauty of these birds has caused admiration of people in many cultures throughout the world.

Their symbolism is especially spread in Japan, China, Korea, South Arabia, Aegean, and among the Native Americans in North America.

They are often considered a symbol of everlasting love. The cranes are considered symbols of youth and happiness, good fortune and longevity. They are symbols of royalty, grace, and balance.

When a crane comes to your life it brings a powerful message. They require you to establish balance in your life. They are also a sign of good fortune and success, com

The Meaning of a Crane as a Totem Animal

The Crane totem has many different meanings. Some of them are:

Elegance and grace. Cranes are elegant and graceful birds, and they share that characteristic with you if you happen to have them as your totem.

Balance. Cranes often stand on one leg, and they manage to balance successfully in that pose. The crane totem animal teaches you of the importance of leading a balanced life. If you have a crane as your totem animal, you are often a balanced person and you watch carefully not to make any irrational or haste moves and decisions which could jeopardize that balance. You keep everything in your life under control.

Loyalty and faithfulness. Cranes are known to spend their lives with the same mate, and these are traits you probably share with your totem animal. You are faithful and you usually have life-long romantic partnerships.

Crane as Your Totem Animal

If you have a crane as your totem animal, you can consider yourself lucky in the true sense of that word. You are a well-balanced person, in control of every aspect of your life.

You are also very elegant and have graceful movements which many people admire.

You are usually a social being, but you also enjoy spending time alone.

You are a faithful and loyal partner with great respect for your relationship. Your love towards one person tends to last a lifetime.

You are focused on your goals and you are ready to do all it takes to achieve them. You don’t hesitate to work hard and putt in an effort to accomplish what you desire.

If a crane is your totem animal, you are usually a very spiritual person and you seek spiritual advancement. You seek to gain spiritual knowledge and you aim towards spiritual enlightenment.

You are a wise person and people often seek advice and opinion from you.

What if a Crane Appears in Your Life?

The crane appears in your life with an important message regarding your current life circumstances.

Sometimes a crane appears in your life when you have lost control over your life and many areas of your life are imbalanced.

The crane is asking you to establish and then maintain the much needed stability and balance.

A crane could also be a reminder to show more love and appreciation to your partner and be grateful for the love you share.

Don’t jeopardize the relationship you have for a temporary fling.

When to call on a Crane?

You should call on the crane totem when:

Dreams about Cranes – Interpretation and Meaning

Dreams about cranes are usually a good dream symbol.

They symbolize good fortune and happines. They can also indicate the need to be patient in some situation.

Dream about cranes flying in the sky is a very fortunate omen and usually indicates prosperity and progress.

If the cranes were falling down from the sky, that dream could indicate some unexpected events.