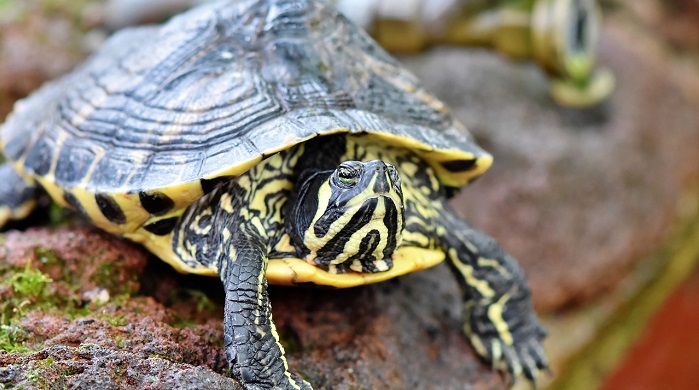 Tortoises are reptiles which resemble turtles, but what distinguishes them from turtles is that they are exclusively land animals.

Some species of turtles live in water, but tortoises live only on land.

They resemble turtles a lot, and they have a hard shell as well, that they use for protection against predators and threats. They retract their head and necks backwards into the shell when they need to protect themselves.

The size of these animals varies. There are species which have few centimeters and some reach two meters in length. Tortoises are usually daily animals, but they have a reclusive nature.

Many species have a very long life span, like the Galapagos tortoises which are noted to live over 150 years.

In general, most of these animals live around 80 to 150 years. Their unusually long lifespan for an animal makes them a symbol of longevity in some cultures, like China for example.

Tortoises hatch from eggs after a period of incubation as fully formed and they begin their survival to adulthood. Females are usually larger than males.

They usually have a smaller tail than males. They have very small brains. They live in different habitats, such as grasslands, deserts, shrublands, wet forests, mountains, sea sides, etc. They are mostly herbivores, feeding on fruits, flowers, weeds, grasses, etc.

The tortoise is considered a symbol of longevity, wisdom, prosperity, abundance, and good fortune.

They are also symbols of steadiness, stability, security, protection, endurance, patience, endurance, knowledge and order. They are considered auspicious animals. In China, the tortoise is one of the four sacred creatures which are bringers of good luck.

In dreams, tortoise could have both good and bad meanings. If you had a recent encounter with a tortoise or you saw it in a movie or on television, chances are that the dream is a mere reflection of your daily events. 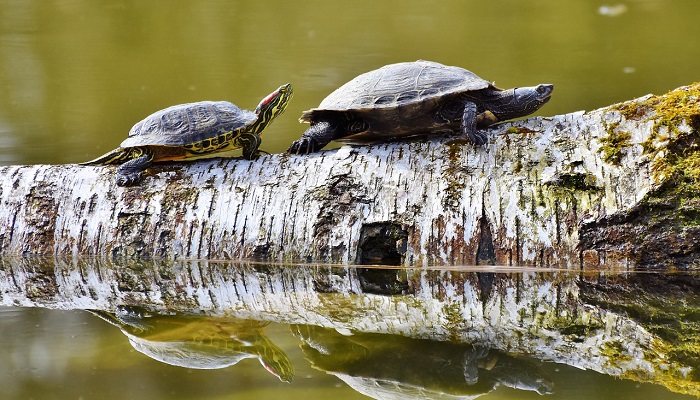 If you dreamed about a tortoise without seeing one recently, that dream should not be overlooked. It is important to remember all its details to have a better understanding of the message that it tries to convey to you.

When a tortoise appears in your dream that dream could indicate someone insincere and sneaky in your surroundings. Maybe you have some false friend who doesn’t think well of you and is only pretending to be your friend and to have your best interests in mind.

It could also indicate someone who is making you wait for something without consideration that you are wasting time and possibly money in that situation. It could be a sign of procrastination and stalling.

Sometimes a dream about a tortoise could mean that you will make someone angry at you because you might be stalling and procrastinating with some work you need to finish.

Possibly they have been waiting for you for some time and now they are getting ready to make some serious remarks on your behavior.

These dreams could be a sign of happiness and success of your actions. It could indicate finalizing something on your own without anyone’s help.

Dreams about tortoises could be a sign of pregnancy, especially if you dreamed about baby tortoises. Such dream could also have special meanings for women who are already pregnant.

For example, a dream of a big tortoise for a pregnant woman could mean that everything is alright with the pregnancy and that the baby will be healthy.

If the tortoise was dead in the dream of a pregnant woman, that is usually a bad sign and warns the woman to take good care of herself and the baby, so that she wouldn’t provoke some unnecessary risky situations where she could jeopardize hers and the baby’s wellbeing.

If a pregnant woman dreams of catching a tortoise, that could also be a warning to her to pay attention to her health and refrain herself from doing hard labor or taking some other risky actions.

If a pregnant woman dreamed about two tortoises, that could mean she will give birth to twins.

Dreams about a tortoise are often a sign of laziness and procrastination. The tortoise moves very slowly and that is the reason why it often appear lazy.

This dream could reveal that the person is not trying enough to achieve success and is putting of the actions towards their desired goals. This dream could be a reminder from the person’s subconscious to stop procrastinating and begin taking action.

A dream about a tortoise could also be a reminder to be patient in some situation because you could ruin your chances of getting something or succeeding in your efforts if you cannot control yourself and be patient.

Dreams about tortoises can often be a sign of slow but steady progress towards your goals. It is also a sign of business and career success.

Dream of Tortoise – Meaning and Symbolism

Dreaming of a cute looking tortoise – If you dreamed of a cute tortoise, that dream is a good sign. A cute tortoise could indicate that you will soon hear some news that you were expecting for some time or some long awaited result which will make you happy.

Dreaming of a tortoise bite – If you dreamed of seeing a tortoise biting someone, the dream could mean that you will soon be wooed by a person you would never expect that from, and you could actually agree to date that person.

Dreaming of being bitten by a tortoise – In some cases, this dream could reveal your fear of tortoises. This dream often indicates stress and pressure you feel because of some duties you have. Possibly you are afraid that some unfinished business will get to you and you cannot seem to speed up the work.

Dreaming of a dead tortoise – If you dreamed of seeing a dead tortoise, that dream could possibly indicate revealing the true intentions of some female from your surroundings. It is possible that the person was scheming something behind your back and luckily you found out about it.

A dream of cooking or eating a tortoise could also be a sign of worsening of your health and a warning to pay attention to your wellbeing, especially to your diet.

Maybe you have neglected your needs and your body is beginning to feel the results of that neglect.

You are considering all people as equal, despite their differences.

If you weren’t able to catch it, that is also a bad sign, and often indicates illness.

Dreaming of a tortoise which is not afraid – If you dreamed of getting close to a tortoise which wasn’t afraid of you, that is a good sign. It could be a sign of some unexpected fortunate event that will make you immensely happy.

It could be a sign of wealth and fast income.

Maybe some secret you didn’t want to share with anyone accidentally leaked out and you now feel bad and vulnerable. Maybe someone who knows your secret/secrets is trying to use them against you and jeopardize your security, and you wait in fear what will happen.

That is why you feel exposed and unprotected.

Dreaming of a tortoise entering your home – If you dreamed of seeing a tortoise in your house, that dream is a good sign. It usually indicates that your hardships and troubles will soon be a thing of your past, and you are expecting some lucky days ahead.

It is often a sign of financial gains, increase in your income and good fortune.

You might actually get hurt by this person, physically or in some other way.