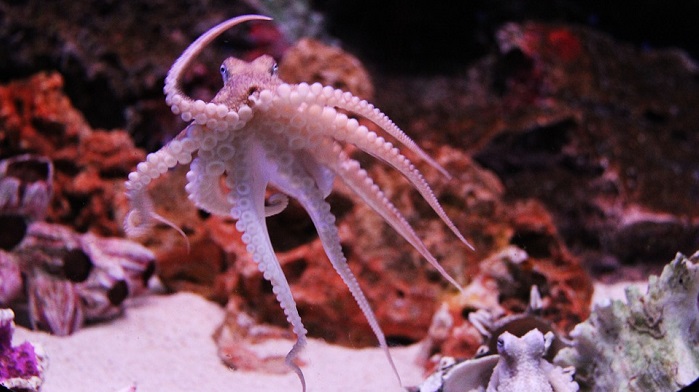 Octopuses are so strange creatures, everyone would agree. Although they appear to be something so different from us, humans, it is not like that in reality.

In fact, octopuses share several important characteristics with humans, while there are other, fantastic facts about them, which make them completely different and, thus, intriguing, inspiring and interesting.

Therefore, you could only imagine their symbolism in our dreams.

These strange sea animals are unbelievably intelligent. Did you know that octopuses are capable of recognizing people’s faces and learning how to sole a puzzle?

Moreover, octopuses do not like to be bored and they are capable of inventing complex games and finding a way out of a labyrinth.

In addition, they have excellent motor skills, so they could open a sealed plastic bottle and to perform similar tasks. Not only they are smart and skillful; octopuses are true sea magicians.

An octopus could literally disappear, by squeezing through very tiny holes and clefts. Their bodies are incredible flexible and well equipped for ‘sneaking out’ through tight spaces.

Not only they are physically capable, but octopuses also know how to unlock locks and untie nodes. Fascinating and pretty much human-like, isn’t it?

In addition, octopuses are known to be tidy and clean animals.

They love their houses to be neat and comfortable. They change their homes many times; octopuses carefully choose the most fitting sea shells, bottles or anything like that, which could serve as their house material.

Octopuses always keep their homes clean. They would retreat inside and, from the safety of their hose walls, patiently lure a prey.

Although it is pretty hard to imagine, having in mind their strangely shaped bodies, octopuses are capable of both walking and running, even outside the water. 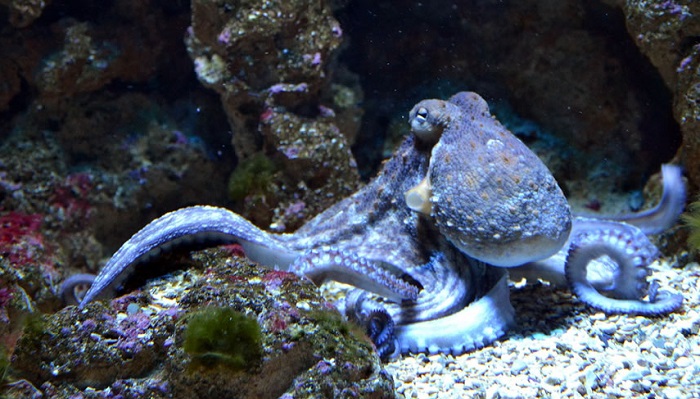 They have another, probably the most famous octopus surviving mechanism, changing their color and form in order to blend into their surroundings. They could also imitate other creatures and humans, as well.

Octopuses may appear indifferent, calm and pretty cool. However, they have their moments and do not hesitate to attack much larger and more bloodthirsty sea monsters, such as sharks are.

Moreover, certain octopuses are known to attack and rip of tentacles of one of the most venomous jellyfish species, the Portuguese Man o’War.

Now when we have learned something more about these interesting and strange sea creatures, what about our dreams featuring octopuses?

First of all, dreams about octopus are not among common ones and they could happen only once in a while, if so.

There are many people who have never had a dream about an octopus, while they had numerous dreams about other animals, including sea animals. However, those who have surely wonder what such dreams mean.

It is believed that dreams about octopus bring bad luck. However, if you felt calm and good seeing an octopus, it might not apply to your case. Whenever you try to interpret a dream, always consider all of the emotions you have about it, even if the common sense or a written interpretation says the opposite.

We will present the most common octopus dream scenarios and interpretations. We would like to help you better understand this strange dream about an octopus. Well, all dreams about octopuses are a bit strange.

In general, it is believed that an octopus in a dream represents bad luck and unfortunate events, but that does not apply to all octopus dreams.

Usually, such dreams have something to do with your plans and work, affected, stopped or prevented by other people, those who do not wish for you to succeed.

Octopus dreams are, in that sense, related to your working environment. However, they could be associated with your personal and your social life, as well.

Dreams about an octopus in the sea

If the octopus calmly swims around, without any particular interaction with you or if it looks or turns to you, without touching your body, it is a sign you are about to meet some friends you have not seen for long or that you will meet new people.

This could also mean you will attend an important social event.

Dreams about an octopus on the ground

If you dream about seeing an octopus, on the ground, out of the water, it is not a good dream, even if we have learned these strange animals can actually survive same time on land and even move.

This dream means your plans will be stopped or spoiled by something you have not planned.

It could also mean someone will stop you from achieving your goals. In general, an octopus on the ground represents failure and unfulfilled dreams and unfinished projects. However, it does not have necessarily to be completely negative.

This dream could also suggest you should abandon a project you are working on, because it is pointless and you see it, but find it hard to admit to yourself.

Perhaps you have invested much time and effort in that project, so you are very unwilling to give up. Think about if there is such a situation in your current life.

Dreams about catching an octopus

Catching an octopus in a dream is good.

This dream means you will be successful in your efforts to accomplish something. This dream represents success, victory, progress, prosperity, fortune and good luck.

In addition, the success could be related to any area of your life.

Moreover, this dream is a good indicator of financial benefits. Either you will receive a fortune from an unexpected source or you will be rewarded for something you have done.

Dreams about eating an octopus

Eating an octopus in a dream could be an extremely positive omen. Such a dream means you will have more energy and vitality in the following period. This dream symbolically represents gaining both physical and mental strength.

You will feel as if there is nothing to stop you or prevent from progressing. This dream could help you realize how actually strong you are and make you aware of your qualities and talents.

On the other hand, this dream could be a reflection of raw energy you already feel, so it is good.

However, if you have difficulties swallowing an octopus or if it is alive and you are choking on it, it means you have some great struggles in life. Usually, those are deep, emotional, intimate struggles only you know about.

You question your own traits and you feel insecure, although it is something no one else sees.

This dream suggests you have your own demons, but it is good that you fight them.

Dreams about a dead octopus

This dream has two meanings. On one side, it could be a positive sign (if you feel like that, of course), because it could mean your obstacles are removed. People who try to harm you and spoil your success are not in your way anymore.

This dream means you are capable of being successful, even if the times are hard.

A dead octopus represents defeated enemies and overcoming of obstacles and challenges.

However, this dream could also be negative. In this scenario, a dead octopus does not represent something against you, but exactly the opposite.

If you feel sad or angry because of seeing a dead octopus in your dream, it means your plans will be spoiled and you will experience failure. However, this dream also means that you should accept failure; you cannot affect and control everything.

It could have a bitter taste, but we are sure you are strong enough to go through the bad phase.

Dreams about being strangled by an octopus

Dreams about being strangled by an octopus are extremely rare and quite scary. This dream suggests you are threatened by your environment. Maybe you cannot see that, but there are people who do not wish you to feel good. They would like to see you fail, actually.

Such a dream could suggest you are surrounded by people who would like to manipulate you and drain your energy.

Someone is trying to exploit you. Open your eyes and ears and do not be too confidential. There are people whose trustfulness should be tested.

On the other hand, this dream could also mean you have done something really bad and you tried to get away with it.

Maybe you have even forgotten about it, but your conscience is a powerful storage room. It haunts you in your dreams in a form of an octopus. Everyone faces their demons, eventually.

You should gather your courage and take responsibility for whatever you have said or done.

Once your conscience is clean, you will definitely stop dreaming about deadly, strangling octopuses.