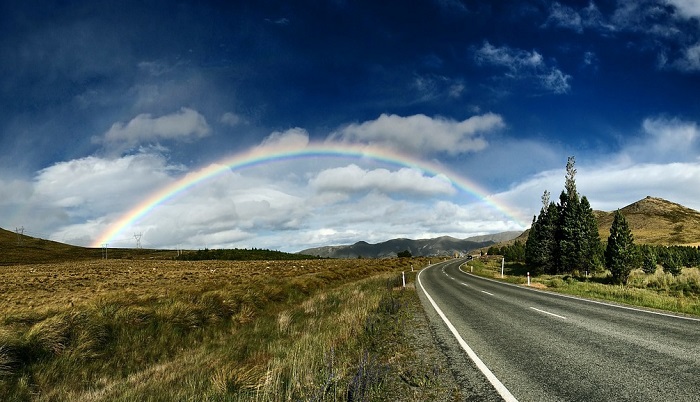 Rainbows are possibly one of the most fascinating natural phenomena. Everything that is so beautiful, transient and untouchable to us, make us wonder if there is some magic behind it.

That is the reason why there are many beliefs about rainbows, all around the world.

Every culture and tradition on our planet has their own beliefs, myths, legends and folktales about rainbows. In this article, we will talk about dreaming of rainbows.

Before we enter the magical and mysterious realm of dreams, let us learn some interesting and amazing facts about this impressive and colorful natural phenomenon.

These information will help us better understand the magical symbolism of rainbows appearing in our dreams.

First of all, there is not only one type of rainbow, the one we usually see when sunrays shine through raindrops, after a storm.

There are several types of rainbows and they differ depending on angles of sunrays, weather conditions, shapes and positions of raindrops and so on.

What is also interesting is that rainbows are actually round; they for a circle of colors, but, from our position on ground, we are capable of seeing only the rainbow’s arch.

In addition to different types of rainbows, there is never the same rainbow for two people watching it.

Everyone sees ‘their’ rainbow, because the position of the viewer ‘creates’ the rainbow that is only for him or her to be seen. Rainbows have always been partially mysterious to us. Until the seventeenth century, no one knew what it is, how it is created and what is it made of.

One of the most famous Greek writers and poets, Homer, claimed there is only one color that makes a rainbow and that it is the purple color. Another notable Ancient Greek, the philosopher Xenophon, was of the different opinion and he claimed rainbows consist of three colors, purple, greenish yellow and red.

During renaissance, the color palette of rainbows has widened and it included four colors, red, blue, green and yellow. 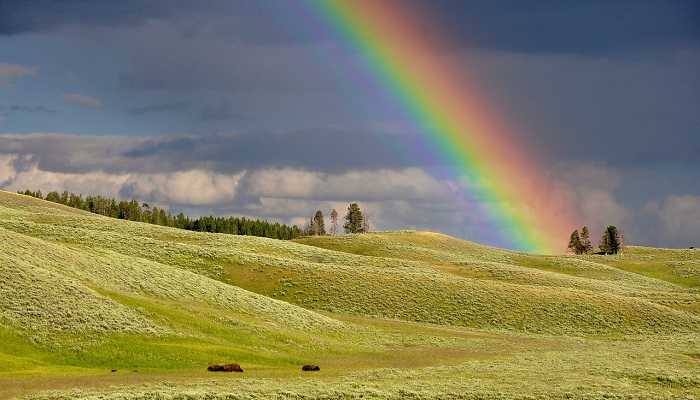 This colorful debate had lasted until Isaac Newton finally determined seven colors of the rainbow.

What we know and actually see today is that there is actually no precise number of rainbow colors; there are many sophisticated shades and the colors elegantly blend and leak into each other.

We know that rainbows are transient, delicate phenomena and that they last pretty short.

However, the longest recorded rainbow phenomenon has happened above Sheffield in Great Britain, in 1994. It lasted for amazingly long nine to fifteen hours, which is quite impressive for such a natural phenomenon.

Now let us return to magic and symbolism. As you probably know, rainbows symbolize many things, usually very positive ones. In various cultures around the world, rainbows represent luck, wealth and fortune, but there are several beliefs that have negative connotations associated with the phenomenon of rainbows.

Dream interpretations of rainbows rely on traditional understandings and beliefs about rainbows, for a great part. One of the most popular rainbow beliefs is that at the end of it there is a buried treasure or a treasure collected and guarded by certain mythical creatures.

This belief is present in various cultures, folktales and fairy tales.

This mythical interpretation is also applicable when trying to understand dreams about rainbows. All around the world, rainbows are commonly associated with good things, concepts and ideas such as hope, luck, well-being, joy and happiness.

In medieval Europe, there was a folk belief that the absence of any rainbows for a period of forty years will announce the end of the world; they could relax and joy life, since you could imagine they felt pretty secure about this possibility.

However, there were also some ‘dark’ beliefs about rainbows. In some Slavic traditions, rainbows were considered fortunate, but there were some points they could be dangerous.

For example, if you look at the base of a rainbow, that could bring you bad luck, even death.

The same applies if you keep looking at the peak of its arch. Having all this in mind, what do you think about dreaming of rainbows? Have you ever dreamed about it?

Let us try to unravel secret mysterious meanings behind rainbows in dreams.

Dreams about seeing a rainbow

Seeing a rainbow is usually believed to be a good sign, in both dreams and reality. Rainbows are fascinating and strangely beautiful; they represent something abstract and present at the same time.

If you see a rainbow in your dream, it means you will not lack neither imagination nor the drive to accomplish your goals and make your dreams come true. Seeing a rainbow should encourage you to keep on going.

If you see a rainbow in your dream, you could associate the phenomenon with any situation in which you are anticipating something.

The dream means you will get it. You will earn some money, be rewarded, be pleasantly surprised, meet a new, positive person, win the heart of someone you have romantic fantasies about and so on.

Seeing a rainbow brings luck and fortune in all areas of life. This dream should make you feel calm, confident and serene.

Dreams about a fading rainbow

If you dream about a rainbow that starts fading away or that you have seen it disappear, it means your fantasies and dreams will not yet be fulfilled.

However, this dream should not discourage you. It means that there is hope for you to see your dreams come true.

At the same time, this dream reminds you that pleasures in life are transient and that the life is transient. You should take the best out of every moment in your life.

Dreams about a rainbow in the rain

Dreams about a rainbow on a rainy day or a rainbow appearing after a storm are positive.

Such dreams should give you hope for the future and help you raise your spirits, if you feel down.

This is a typical dream about life; after every storm, there must be light. Seeing a rainbow makes this notion more hopeful and encouraging.

It means your life is not only darkness and heavy clouds, there are still so many beautiful things.

This dream should also remind you precious things are rare and to be carefully handled. You should never underestimate a single good thing in your life, even if there are much more dark ones, at the time.

Dreams about finding the end of a rainbow

Dreams about searching for a base of a rainbow’s arch could be very interesting, depending on whether you have found it at the end, what was at the end of the rainbow and so on.

If you dream about searching for its end, it probably reflects your dedication and determination for something in your waking life.

However, the dream could help you decide whether the struggle and search are promising or not.

Trust your instincts on this dream. If you dream about searching for it, but never finding it, this could mean you should change your course in reality.

On the other hand, if you have found the end of the rainbow in your dream and there was a treasure or something you like at the end, it means your work and dedication will pay off.

If you find nothing or something you do not like, the dream implies failure, disappointment and plans that are pointless and exhausting.

Dreams about walking on a rainbow

Dreams about walking on rainbow are probably the rarest of rainbow related dream. This dream has specific and very positive meaning. It should be inspiring and very encouraging experience.

This dream reflects your adventurous, romantic and dreamy personality.

You are an individual with rich imagination, incredible energy and optimism.

The dream encourages you to pursue your dreams; however, you should also be careful not to get lost in an imaginary world.

Dreams about a rainbow at night

Dreams about seeing a rainbow at night are a bit confusing, because, normally, you would not see such a phenomenon (although, there are cases of a lunar rainbow and some other rare natural phenomena).

Seeing a rainbow at night means you are about to discover some new, deeply hidden things about yourself.

This dream symbolizes introspection and spiritual development.  It is a strange, magical, but positive dream.