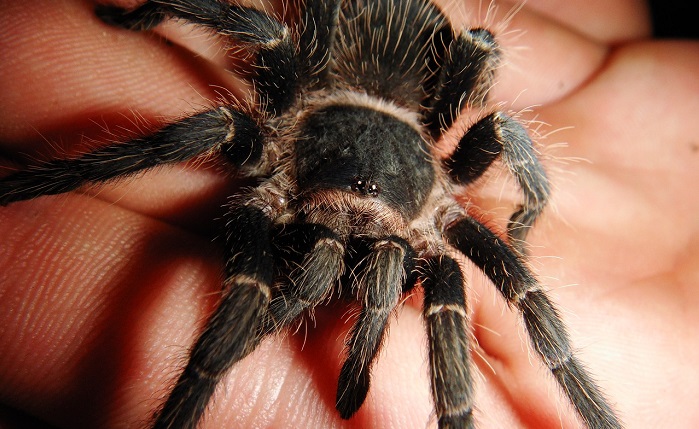 Many people suffer from a phobia called arachnophobia, or extreme fear of spiders.

This is quite a common phobia and many people although they don’t have an extreme fear of spiders, find their presence disturbing.

The fear is usually related to so called “giant spiders”, while the tiny ones usually don’t cause any fuss with people.

The giant house spider is possibly one of the biggest spiders in Europe.

It can be found in Central Asia, Northern Africa and Europe, and by human influence it was introduced to North America as well. They are not a threat to humans and their bite is harmless.

Both male and female spiders don’t differ much in appearance, only in size. The female giant house spiders can reach up to 18.5 in length, while the males reach 12-15mm.

This spider is called a home spider, but its original habitat are dry forests, caves, and under rocks, but are also common in houses.

They build messy webs with a funnel at the end where they wait for their prey. They have a long lifespan for an insect, usually up to three years, but can live up to six in some cases. They are very fast spiders.

The giant wood spider, banana spiders, or the Golden silk orb-weaver are famous for their impressive webs. Their average size is 4.8 – 5.1 cm without the leg span, but can in some cases reach 6.9 cm.

It is observed that the ones living in urban areas grow larger, possibly due to abundant food supplies. 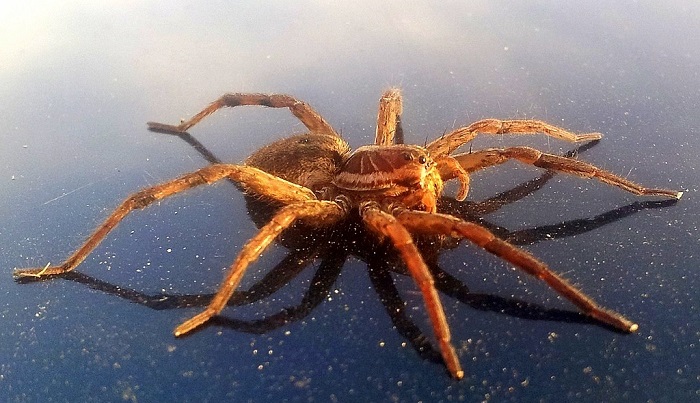 These spiders are found throughout the world, but widespread in warmer and wet regions. They are known for their large webs which can reach 1.5m in diameter.

They are always in their webs which appear gold due to the yellow silk threads they produce.

These spiders bite their prey and inject venom to paralyze the victim.

They are also known to make food stashes to have a backup when food is scarce. Females are sometimes up to 10 times the size of males. Their venom is not very dangerous for humans.

Dreams about Spiders and Giant Spiders

As we previously said, many people are afraid of spiders, which is, why their appearance could be a disturbing experience as well, that will leave the dreamer with a lingering feeling of unease throughout the day.

In fact, dreams about spiders don’t have to be a bad sign. In some interpretations, spiders symbolize receiving good news or experiencing some pleasant surprises.

This dream could even be announcing some guests visiting you soon.

A giant spider could be a symbol of some large gains, pleasure, commodity, or gains of big property and material wealth.

Small spiders could be a sign of receiving some small gift, but one that will make you happy.

A spider web could be a sign of some pleasant encounters with friends or relatives.

If you were caught in the web, in some interpretations, that could be a premonition of your upcoming marriage. A spider’s bite in a dream could be a sign of earning money from games of chance.

These insects are feared by many, which is why they are considered a symbol of something to be feared of. In some cases, a spider could symbolize some fear you have in life and the need for you to confront it.

If you have dreams about spiders often, especially dreams about giant spiders, it is advisable to go within and try to discover what could be the reason for that.

Do you have some big fear you are not admitting to having, or you are completely aware of it, but you don’t know how to release it?

This dream could represent a signal from your subconscious that it is time to deal with this fear (or fears) because they are blocking your life’s progress and preventing you from doing things you desire.

Some dream interpretations consider the spider in a dream as a symbol of our mother and the relationship between the two of us.

For example, a dream about a giant spider could depict our mother as dominant and obsessive, as well as prone to criticizing everything we do.

If we experience our mother as such, we might often dream about giant spiders. In these dreams, the spider could attack us, or bite us, or wrap us in its web, etc.

People who have these dreams often should think about the relationship with their mother and see if there is a way to improve it.

It would be wise to talk to their mother and try to explain how they feel in the relationship as well as ask for more respect, tolerance, and freedom.

The people who have such a relationship with their mother could have dreams about spiders, especially big spiders (depending on the size of the obsession) very often.

That could be a sign from their subconscious that it is time to deal with that issue soon because it’s burdening them, whether consciously or subconsciously.

In some cases, spiders could indicate the traps we could experience by other people or it can reveal that we feel trapped by something or someone.

So, a giant spider indicates some big trap we might fall into, and the dream should be considered a major warning. It is important to remember all the details of the dream to be able to decipher from where the danger is coming.

The people that were in such a dream are very important, especially if you know them.

If the people you dreamed about were not known to you, it is important to remember some of their features and try to decipher the clues your subconscious is sending you. It is not a difficult process, the only important thing is to use all the details and make a conclusion.

Giant spiders often refer to big problems and issues we have, while small ones (especially if there were many of them) indicate many small problems we are encountering, but not that threatening and important.

A dream of a giant spider could be a sign that some issues or problems you have in life are getting out of proportion and you need to start dealing with them as soon as possible.

Maybe you have been ignoring the problems you have, hoping that they would disappear on their own, but you now realize that they have only grown in time, and are threatening your stability.

This dream could indicate strong emotions beyond control about some situation in your life.

Dreams about giant spiders often indicate things in our life we cannot control and that causes panic and stress.

If you were afraid of the giant spider in your dream, that could be an indication that you don’t feel confident enough to confront your problems and you fear dealing with them.

If, on the other hand, you dreamed of killing the giant spider, this dream indicates that you have the will and courage to deal with the issues you have regardless of their proportions.

You should consider whether there is someone at your work who considers you their competition and would be able to set you some kind of trap to make you look bad before your superiors or do something worse to harm your reputation.

If the spider in the dream was a symbol of your mother and the relationship you two have, this dream could actually be a good sign, indicating that you and your mother have finally established a relationship on equal grounds, full of respect and appreciation.

It could also indicate that someone who doesn’t have your best intentions in mind is setting a foundation for a lot of traps for you to fall in and ruin your reputation, status, health, happiness, or cause damage to some other important area of your life.

Consider this dream a warning and be attentive to people in your life you don’t trust and could expect them to act in such a manner towards you.