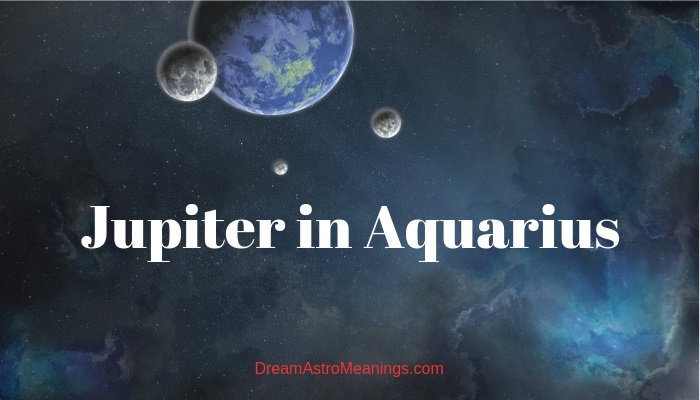 Jupiter is the biggest planet in our planetary system. It is considered a giant because it is larger in mass than all the other planets together. It doesn’t have a solid surface and is made mostly of hydrogen.

The planet got its name from the Roman god of thunder and the skies, Jupiter. This god was considered the king of the gods in ancient Rome. It was one of the most important deities until the proclamation of Christianity as the main religion in the Roman Empire.

In astrology, Jupiter is considered the “great benefic” since ancient times. It is a planet, which is responsible for all the wealth and good opportunities for prosperity and growth.

Jupiter is the ruler of the sign of Sagittarius and it is strongest in that position. In Cancer it is also strong because it is exalted in that sign.

This planet usually has a beneficial influence on a person’s life, especially regarding their finances and general wellbeing. This planet is the protector of our lives, by bringing us some fortunate set of circumstances, which help us go through the difficulties we encounter.

Good placed Jupiter in a natal chart is a true blessing, and people with such placements are often very lucky and have a lot of opportunities to gain wealth without much effort. They usually don’t have any financial worries.

If it is badly placed, which means it is in a sign where it cannot express its full power, badly aspected with another planet, or it is placed in a natal chart house where its powers are limited, the person usually lacks good luck and opportunities to progress and improve their financial wellbeing.

Because Jupiter goes through one sign in a span of a year, it doesn’t have such a great influence on individuals, but influences whole generations of individuals born in the span of one zodiac sign. All of them share the traits of Jupiter in that sign.

On the other hand, personal planets like the Sun, Venus, Moon, Mercury, and Mars, which pass through a sign in a much shorter time span, have a strong impact on people’s personalities and shape their individuality.

Jupiter in different signs influences people, but its true influence on a person should be determined by its position in a sign, house of the natal chart, as well as through the aspects it is making with other planets in the chart of a specific person.

In this article, we are giving data about the traits of people who are born under the influence of Jupiter in Aquarius.

Men with Jupiter in Aquarius tend to be eccentric and rebellious. They don’t like any kind of routine and they don’t like to be bossed around as well. They are very intelligent and creative, and capable of creating works of great value for humanity.

They are adventurous and love exploring and discovering new things. They are true innovators, regardless of the field they choose to be in. With Jupiter in Aquarius they are mostly successful in Aquarius ruled areas.

They are concerned for the wellbeing of humanity and often involved in some charity and humanitarian organizations or some goals which will benefit a lot of people. These men are selfless and sincerely enjoy helping others.

They are happiest when they put their abilities into the service of humanity.

These men (as well as women with this placement), often don’t value much their work and efforts and don’t care much about money as well. Because of that they end up underpaid and without sufficient financial award for the work they are doing.

They can be very successful in any Aquarius ruled field and often choose careers from these areas. They don’t like restrictions and boundaries, and don’t like routine and boring jobs.

They are inspired by challenges at work and these situations usually inspire them to give their maximum of work efforts. They often inspire others with their ingenuity and abilities to create new things.

Women with Jupiter in Aquarius are very interesting, but can be a bit eccentric and considered weird by their surroundings.

These women like men with this position are bored by routine and discipline and seek jobs and projects where they will be able to retain their creative freedom as well as freedom of movement.

They don’t like the restrictions which organizations and big systems require. They feel best in the position of a freelancer who is able to freely organize their time providing they meet the deadlines for the work outputs.

They are very creative and often find unusual solutions to problems. These women are often in professions where there are not many women, but they manage to accomplish results equally good as their male colleagues.

They are humanitarians by nature and love creating things which will benefit the world, and that trait often makes them become a part of fulfilling humanitarian causes of large scales. They often do work for big humanitarian institutions.

These women truly enjoy helping people and they inspire others with their selflessness.

Some of the good traits of Jupiter in Aquarius are:

Some of the bad traits of Jupiter in Aquarius are:

Aquarius is a sign which in general rules eccentricity and unpredictability, but also high intelligence, innovation, and geniuses.

Jupiter in Aquarius gives the people born with its influence to prosper in the areas ruled by both this planet and the sign. These people are usually very intelligent and quick thinkers.

They immediately discover solutions for different problems. They often have an eccentric personality, but are kind and helpful beings, who selflessly offer their services and help to others without asking anything in return.

The best way for these people to use their full potential is to choose professions where they can use their abilities and not be bored by the routine and limitations. They appreciate their freedom very much and don’t like any kind of restraints.

They are inspired by new things and they always want to do something new. Doing the same stuff every day bores them to death.

They want something challenging and inspiring for their mind. They are often very intelligent and some of them are even genius. They are interested in areas like science, new discoveries and innovations, technology, IT, innovations and discoveries, aviation, extreme sports, movies, photography, etc.

These people love exploring and have an adventurous spirit. They could achieve the maximum of their potential if they have the opportunity to freely organize their time and produce the desired result in their own terms.

They don’t like pressure and have difficulties working under pressure imposed by individuals or organizations. They don’t like authorities and usually rebel against them. It is important for them to have the freedom of movement and not being bossed around by their superiors.

They can be very creative and create artwork as well as other creative stuff. They can be talented photographers or filmmakers. These people are usually not motivated by earning money, but by the challenge of creating something new and useful to people.

Some of these men are able to create things of benefit for the humankind.

Many of these people end up as successful scientists and engineers who use their intelligence and knowledge to discover or create things of great significance and use to people.

They can become so overwhelmed with work and creation that they forget to eat or take care of their basic needs. They should be aware that by exhausting themselves with work they jeopardize their health and become more health-aware.

These people can attain great wealth in Aquarius related areas. Although money isn’t very important to them, the ones that have more than enough, often use it to help some humanitarian causes because they enjoy helping people and do it selflessly and wholeheartedly.

Many of them devote their lives to causes which will benefit humanity.

They love a good challenge and the best challenge for these people is discovering something new. They never back off from such a challenge. These people are usually very understanding and sympathetic to other people’s differences.

They don’t judge anyone and try to get along well with everyone.

Because they don’t value money as much, sometimes it is hard for them to earn enough money, simply because they don’t know how to charge their services well and often don’t appreciate their work enough to value it in terms of money and financial gain.

Jupiter is transiting through signs in a span of a year. During its transit through one sign it influences the whole generation of people born during that year and all of them share its traits.

Because of that, to determine the influence of Jupiter on the life of a certain individual it is important to look at its placement both in the sign and in the natal house of an individual as well as the aspects it is making with other planets in that chart.

People born with Jupiter in Aquarius are humanitarians and often put in work into achieving some goal which will benefit humanity. These people are selfless and often don’t value money as well as their work efforts.

That attitude could be a reason why they don’t always get an adequate reward for their efforts.

They don’t like being pressured by rules and restrictions. They don’t do well in systems with strict hierarchy where they are being bossed by their superiors and pressured to follow routines.

They are smothered by a routine which kills their inspiration and creativity. They have a rebellious nature and often oppress authority. They work best when they are their own boss or in work environments where they are left to organize themselves and only follow their deadlines.

They love doing freelance work because it enables them the desired freedom they crave for.

They are very intelligent and capable of making discoveries which could benefit humanity. They are inspired by challenges and new discoveries. They are interested in fields such as technology, IT, electronics, electricity, film, photography, etc.

These are the areas where they can accomplish great success and be financially rewarded for their achievements.

These people are often eccentric and have an unusual way of doing things. Some people consider them weird because they cannot understand them. Although they might appear unpredictable and rash, they have kind hearts and are focused on doing good deeds for the benefit of others.

It is important for these people to find the right area of interest where they can focus their immense energy and use their abilities to their maximum.