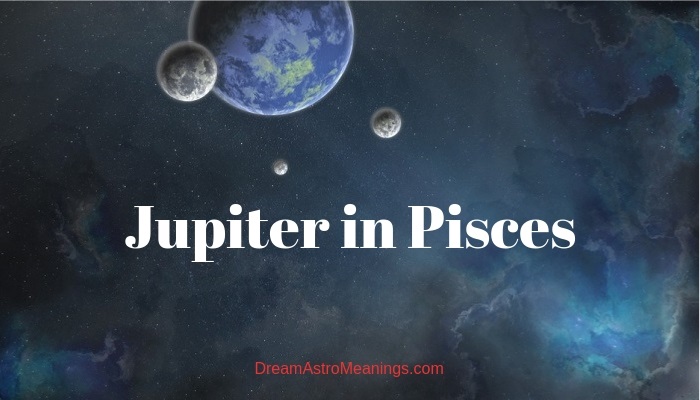 Jupiter is a very large planet, and is one of the so-called giant planets. This planet has the biggest mass of all the planets in our Solar system. In fact, its mass is bigger than the mass of all other planets combined. This giant doesn’t have a solid surface, and it’s composed mostly of hydrogen.

The Roman god Jupiter gave the name to this planet. This god was the equivalent of the Greek god Zeus, and it was the god of thunder and skies. Jupiter was the king of other gods and one of the most respected deities in the Roman Empire until the end of pagan times and the establishment of Christianity as the main religion.

This planet rules Sagittarius and Pisces, and is exalted in the sign of Cancer. When placed in these signs, it has the most powerful and beneficial influence. Since ancient times, it was considered a great benefactor. If well placed, it brings protection and fortunate circumstances for prosperity and wealth. Jupiter is a planet which brings riches, fortune, and progress into a person’s life.

If Jupiter is well placed in a person’s chart, that should be considered a true blessing. This planet is a protector of our life and creates opportunities to progress as well as to escape danger or difficulties we encounter.

People with Jupiter well placed are born lucky and usually don’t need to put in much effort to succeed in their endeavors.

They usually experience a set of fortunate circumstances which help them get where they desire to be, without any struggle. They are financially well off and don’t have any worries in regards to that matter.

On the other hand, when Jupiter is badly placed in a person’s chart, that doesn’t have to be a disastrous thing. This placement of Jupiter can cause the person to lack opportunities for financial gains, as well as to lack good fortune.

These people will probably need to struggle to achieve their goals and succeed in life. Nothing comes with ease, and their efforts are usually blocked or weighted with obstacles and challenges they need to overcome.

Jupiter is a so-called social planet. That means that it influences generations of people born within a certain period. In the case of Jupiter, it is a period of one year, which Jupiter takes to finish its transit through one sign.

All people born within the span of that year share the same traits of Jupiter in that certain sign. Comparing to social planets, personal planets like the Sun, Venus, Mars, Moon, and Mercury, transit through one sign in a lot shorter time span, and shape a person’s character through their traits.

Because of all that, when we are determining the influence Jupiter has in some person’s life, besides its sign, we need to consider the house it is placed, as well as its aspects to other planets.

Men with Jupiter in Pisces are usually very intuitive and sensitive to other people’s feelings. They are empaths and instinctively know how to approach people with issues they need to solve.

Many of them choose professions where they help others in some way. They can be successful medical or social workers, personal counselors, etc.

Some of them have psychic abilities and healing powers which they use to help people and earn money while helping them.

In some cases, especially with badly placed and aspected Jupiter in their natal chart, these men could be prone to doing illegal activities for financial gain, and end up having problems with the law because of these activities.

These men can be emotionally unstable and prone to dealing with their problems, by using addictive substances such as alcohol or drugs.

Women with Jupiter in Pisces are usually gentle and kind beings. They intuitively feel other people’s feelings and thoughts and know how to help them. They are good as social workers, medical staff, veterinarians, and in other professions where others need their help.

In some cases, when they have bad aspects between Jupiter and other planets, they could use these abilities to manipulate people.

These women are often attracted to secrets and mysteries, and often make them their occupation. Many of them are gifted astrologers, tarot readers, or use some other means to see into the future.

They might be doing these things out of pleasure for helping people, but many of them do these things for a living.

If Jupiter has bad aspects or is in an unfortunate house, these women could be prone to feelings of negativity, depression, despair, etc. In these cases, many of them lack sufficient confidence and strength to deal with these emotional states and seek refuge in addictive behavior, using drugs or drinking heavily.

Some of the good traits of Jupiter in Pisces are:

Some of the bad traits of Jupiter in Pisces are:

This means that in the sign of Pisces, Jupiter’s energy can fully be expressed and bring fortunate blessings to the person born with this placement.

People with Jupiter in the sign of Pisces are usually very intuitive and rely on their intuition when doing business or when they need to decide which actions should they take to achieve what they want.

Jupiter in Pisces makes people interested in mysticism, the occult, and all secret knowledge.

They are very secretive themselves, but have a natural ability to discover other people’s secrets. They often work as private detectives and investigators, where these traits are very beneficial for the success of their work efforts.

They don’t like to be in the spotlight and enjoy working behind the scenes. These people are very secretive about their privacy, and not many people know them well. These people have some things they never share with anyone else.

These people are often very intuitive and many of them have healing abilities which they use to heal people and earn their living.  Many of them possess psychic gifts and are able to see into the future. These people are very emphatic.

They often have a natural ability to sense what others are feeling and use that ability to help others, or for their own benefit. They also intuitively sense if a person has good or bad intentions towards them.

They are often very creative and have artistic abilities. Many people with Jupiter in Pisces are musicians, painters, actors, or do some other creative work. They can also be very talented dancers and make dancing their profession.

Many of them express their creativity through photography and some chose to be professional photographers. These people are gifted poets and often write poetry for personal pleasure or as their main occupation in life.

These people have a vivid imagination and are often visionaries which pave the path to others. They sometimes tend to have unrealistic ideas and goals and experience disappointments when they don’t come to a realization.

These people have a natural inclination towards water and all matters related to water. They are great sailors, boat manufacturers and dealers, fishermen and fish dealers, etc. They can also be successful as drink producers and dealers.

The sign of Pisces also rules deception and illegal activities. These people, especially if Jupiter is badly placed in their chart, could be prone to cheating, criminal activities and frauds for financial gains.

They possess a gift of manipulating people and their ability to sense their feelings and thoughts immensely help them in these activities. Pisces rule jails and these men often end up in prison because of their unlawful acts.

Because they are so empathetic, these people are good for all jobs related to caring and nurturing. They have a kind and helpful personality and enjoy helping others, like social workers, personal counselors, hospital workers, veterinarians, etc.

These people are often attracted to secret knowledge, occultism, secret societies, and similar matters. They are often experts in the areas, and active participants. Some of them find themselves in the role of mystical leaders, a secret society member, occult writer or practitioner, etc.

Some of these people with Jupiter badly aspected to other planets could be prone to dealing with their problems by ignoring them or running away from them.

The worst form of escapism they could succumb to is running into addictions such as drugs or alcohol.

People with Pisces influence are prone to these negative habits and many of them don’t consider it a big problem. They are prone to creating an imaginary reality where everything is perfect and they feel safe and relaxed.

When reality strikes them, they often don’t know how to deal with the circumstances they have been avoiding and have now grown out of proportion.

These people often have an unstable emotional system and are prone to depression and periods of extreme negativity and defeatism.

Jupiter is transiting through one sign during a period of one year. During that period, it influences all the people who are born within that time span who share the same traits. In that respect, Jupiter doesn’t have such a personal influence on individuals as the personal planets have.

The personal planets are the Sun, Mercury, Moon, Mars, and Venus, and they take a lot shorter to go through a sign, influencing individuals and shaping their character.

People with Jupiter in the sign of Pisces are kind and helpful. These people love being of service to others and are often found in professions where they somehow help people or animals, such as medical workers, veterinarians, personal counselors, or social workers.

They are very emphatic and sense what others are feeling. Many of them have a heightened intuition and have a gift of seeing into the future. Some of these people make a living foretelling the future.

They are often interested in secrets and occupations related to secret knowledge. They are often experts in mystic and occult knowledge and practice it actively. Some of them are members or leaders of secret organizations.

These people often do work related to water. Many of them are successful seamen, boat manufacturers or dealers, etc.

If badly positioned in their chart, Jupiter can bring these people problems with the law because of their unlawful activities, but also problems with addictions such as drugs or alcohol.