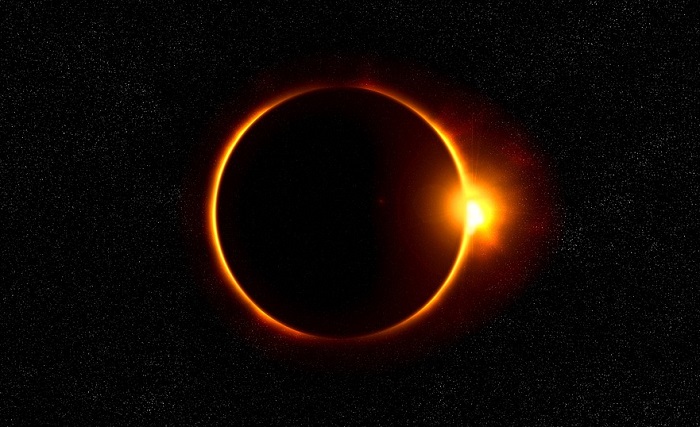 Lunar or Solar Eclipse definitely belongs to the fascinating phenomena in our Universe. These events captured the attention of both rulers and ordinary people in ancient civilizations.

The disappearance of the light during the day was perceived as the end of the world, as a sign that God’s punishment will come soon, etc.

Today, we have extended knowledge about the Lunar or Solar Eclipse, but no one can deny that they are carrying some kind of special effect on us.

The statistic shows that on average there is a total of four to seven Lunar and Solar eclipses annually, but never less than two.

How often these cosmic events appear in a dream world? Very often, these dreams are very common, and they carry such a power that is unbelievable.

Read here what this dream means.

To dream of a lunar or solar eclipse is generally not a very pleasant dream at all, and mostly it is associated with the end of the world and the end of life, and such dreams mostly cause fear.

After we have them, we woke up, glad that it was just a dream.

But regardless of that feeling that awakens in us, a lunar or solar eclipse can carry both good and bad symbols, of course depending on the way we dreamed of the eclipse and what we did while it was going on and much more can actually affect the interpretations, which are very diverse.

If we dreamed of watching a Lunar or Solar eclipse from our home through a window, it indicates that we are a person who likes to be on his own. You love the safety and comfort of your home, and you have no intention of changing that in the world.

Sometimes to find happiness that you had no idea existed, you have to cross certain boundaries and allow yourself to take risks.

You have shrunk too much in the comfort of your home, and you have forgotten what it is like to travel somewhere and meet new people in new places, change the work environment and gain new life experiences.

It’s time to raise the anchor and sail into the unknown. Who knows what good such a journey can bring you.

If you wake up and the Lunar or Solar eclipse has not passed, it means that you will not get an answer soon, no matter what the outcome, and that you have to arm yourself with patience and not let what you cannot change burden you so much that it distracts you. to all fields of life.

If, after that unusually long eclipse, the Sun or the moon

To dream that you are watching a Lunar or Solar eclipse and you see it explodes, such a dream awakens strong feelings in us. That would mean the end of life on earth and everything we know.

This kind of dream indicates that you are fighting and at the same time being afraid for your own existence.

Probably a lot of what you started in your life did not go the way you wanted and planned.

You’ve probably changed a lot of jobs and pursued different occupations but you haven’t actually stuck to any of them.

You lost time, and you didn’t achieve much in any of those fields.

This kind of dream indicates that you are given a chance for a new beginning and that you should accept it.

Decoding the Dream about Lunar or Solar Eclipse

If you have dreamed of watching an eclipse through binoculars, it indicates that the opportunity you have been waiting for and that you are still waiting for is still far away from you.

It is an opportunity that does not depend on you but on a person who does not think much about you and the promise she has given you.

The advice is not to rely too much on that person but to try to push the situation on your own and to close that page once and for all in case you don’t get feedback.

Do not allow others to shape your destiny, but take the strings in your hands. You will realize that this is the best thing a man can do for himself.

To dream of watching an eclipse from an observatory could mean that you are a person who is not easy to deceive.

You are a very real and insightful person who does not allow anyone to deceive you with his sweet talk.

You are probably a person who runs his own business successfully, and because of that trait, you are very successful, and for you, the sky knows no bounds.

You read people well and see clearly whether someone wishes you well or not.

To dream that lunar or Solar eclipse is taking place under a veil of clouds to the extent that we do not see it means that you will miss a business opportunity because you failed to see it in time or simply did not see the potential in it.

If the clouds break even though you missed it this time, you will have a new chance in the near future, where you will not make the same mistake twice.

If the Sun or the Moon have started slowly to appear, it means that the answer or decision is very close.

If you have dreamed that a Lunar or Solar eclipse lasts much longer than it should last, it means that you are worried about something in your life.

It is very likely that you have entered a period of your life where you have been in uncertainty because of someone or something for a long time and that it greatly affects the quality of your daily life.

You’re just not sure what you’re up to, and therefore you don’t function the way you normally can.

This may be the news you are waiting for, it may even be a court decision or litigation, and it may be an unresolved housing issue.

To dream of watching a Lunar or Solar eclipse at night means entering a period when you should take care not to hurt someone deeply by your behavior.

You probably don’t see how much someone is hurt by ignoring them, and even if this feeling of yours comes from an honest place, it is never ok to ignore someone who may be suffering.

So sometimes we have to at least forcibly listen to what she has to say or listen to some of his or her problems purely in order to eventually elicit her sigh in terms of relief from confiding in someone or maybe even a smile.

We must learn to be considerate because if we allow ourselves to eclipse our minds and our hearts, we are truly doomed as human beings.

To dream of watching an eclipse through an airplane window, not being able to move in any direction, such an event means that you will be able to avoid an accident by sheer chance.

This accident that you will avoid may be related to a car accident.

It is possible that your car will break down somewhere on the road, and in addition to being very nervous about the situation, you will not even be aware that the breakdown actually saved your life.

Sometimes, and in fact very often, in everything bad that happens to us, there is something good sometimes.

Now, the big difference – if you had a dream about the Moon eclipse, in that case, it is likely that the news will not be the brightest in this case and that you have to come to terms with it.

But if it was the Solar eclipse in your dream, then that means the news will be favorable as much as the intensity of that Sun shining after the eclipse.

If the light is of lower intensity, it means that the news will be favorable but that a compromise will have to be found for a solution.

If the Sun shines with its full brightness after the eclipse or even better and even stronger than before the eclipse, it means that the news or decision will be more than extremely favorable and much better than you expected and hoped.

In any case, do not be worried because you had this dream, it does not say that something apocalyptic will happen, but it is more a reflection of your inner state.

Such dreams may cause you to feel helpless and lost, when in fact, they are a reminder of an ending and a new beginning.