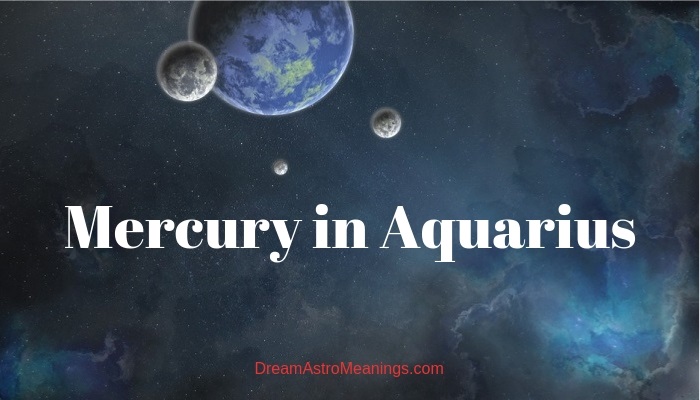 Mercury is the smallest planet of all our Solar system’s planets.

Mercury never moves more than 28 degrees away from the Sun, viewed from our Planet, and that is why it can rarely be seen with a naked eye.

This planet carries the name of the Roman god who ruled trade, merchants, travel, travelers, communication, eloquence, shopkeepers, messengers, thieves, deceit, tricksters, and it was often considered the god of good luck.

Mercury rules the signs of Gemini and Virgo. It spends around 7.5 days in each zodiac sign while orbiting the sun.

Although it has the most strength in the signs it rules, the signs it passes through adds the influence to this planet.

In this article, we talk about the traits of the planet Mercury while it transits the sign of Aquarius, and its influence on people born with this planet in Aquarius.

A man with Mercury in Aquarius is very intelligent and he is well aware of that fact. The sign of Aquarius is ruled by the planet Uranus, and these men are interested in the areas ruled by this planet.

They can often appear vain and self- absorbed with their knowledge and skills, but these men usually are very sweet and kind souls. You might be annoyed by this man’s need to always be right and try to convince you of his opinion about everything, but you must give him respect for the qualities he undoubtedly possesses.

These men are always ready to help the people they love, but they also enjoy helping people in general, usually through some projects and activities they are involved in.

Men with Mercury in Aquarius are usually selfless and make good deeds without expecting a reward or anything else in return.

It is a part of their nature and they don’t make a big deal out of it, unless they have a prominent influence of some other sign in their chart, such as Leo, in which case they will be willingly helping others, but also bragging about that fact.

These men are usually very communicative and often have an unusual way of expressing their opinions. For some people they appear completely incomprehensible, and they could either perceive them as stupid or genius.

In general, there is a dose of awkwardness in approach to people, which differentiates these people from others.

They usually many interests and a waste amount of knowledge on different subjects. These men love traveling, and they love adding an eccentric touch to their traveling adventures. They are also into extreme sports and similar activities, and love being around people who share their interests.

Their relationships with their siblings and their neighbors are unconventional and not very emotional in general. These men often have an analytical mind and a rational approach towards matters of the heart.

They often appear disinterested and detached, and don’t allow circumstances and different events influence their feelings. They manage to control their reactions when they consider it necessary.

A man with Mercury in Aquarius usually has an unusual sense of humor, which not everyone can understand.

They prefer people who have similar interests, but they don’t mind hanging around people who are different because they are very curious and love expanding their experience. They are loyal and devoted friends, and tend to nurture their friendships to last a lifetime.

Women with Mercury in Aquarius are usually not typical feminine women interested in girly stuff. The influence of the sign of Aquarius to the planet of intellect and communication gives these women a trait of awkwardness and superior intelligence, just like with men who have Mercury in this sign.

These women have unusual interests, not typical for women.

The sign of Aquarius gives people a dose of awkwardness and unpredictability, and when Mercury is in Aquarius that mostly refers to their intelligence, appearance and communication with people.

Just like men born with Mercury in Aquarius, these women are usually interested in areas ruled by the planet Uranus, and often choose professions in these areas as well.

These women are very intelligent and quick thinkers. They always come up with the best solutions to people’s problems, which causes the envy of people who are not as skilled as they are.

Because they often choose masculine professions, where there are not many women, these women often have a problem of dealing with the jealousy and teasing coming from the men they are surrounded with, who cannot easily accept the fact that these women have more wit and are more skilled than they are in a certain area.

Their intelligence and capabilities often cause these women issues in relationships with other people, especially with men because they have a problem accepting other people’s opinions, leadership, or someone else making decisions on their behalf.

Like men born with Mercury in Aquarius, these women also have an issue with admitting they are wrong and apologizing for their mistakes. They seem to have a blind belief in their impeccability that they refuse to admit they are wrong even when all facts are against them.

They have a tendency to stubbornly defend some attitude, and refuse to accept other people’s points of view.

Being women who are often in positions where there are mostly men, they often have the need to aggressively defend their beliefs and have a masculine attitude.

They are very helpful and use their knowledge and skills to help others. Like men born with Mercury in Aquarius, these women are selfless and help people without expecting anything in return.

These women are very innovative and often create something that benefits a lot of people.

They are also very creative and always come up with interesting ideas and solutions.

Some of the good traits of having Mercury in Aquarius are:

Some of the bad traits of having Mercury in Aquarius are:

The sign of Aquarius has a trait of unconventionality and eccentricity, and it adds that tone to every planet during its transit through this sign.

People born with the planet Mercury in the sign of Aquarius are usually very creative problem solvers with a unique and unusual approach to things.

They have thought patterns which don’t resemble any other sign, and they seem to find the answers to the same questions using entirely different means than other people use.

These people usually enjoy doing matters differently and they often enjoy opposing and/or avoiding the rules society imposes. They usually communicate their opinion directly, without considering the potential consequences.

Mercury in Aquarius people are very intelligent, but their intelligence is often considered as complete eccentricity and weirdness by people who don’t have the capacity to understand them.

These people are often innovators and often genius people who discover things of great importance for people.

If they don’t have some globally important discovery, they will at least always be full of innovative means of resolving the issues they come across or the people from their surroundings.

These people strongly defend their point of view, and are not very tolerant of different opinions. That trait doesn’t serve them good because they are considered stubborn and difficult to cooperate with. Their point of view is often considered unacceptable by the majority of people who are used to thinking according to the established rules and patterns.

They too are also forced to accept these people’s genius solutions in cases where there are no existing templates.

Aquarius Mercury people are sharp observers of details and nothing misses their eye. They also have an ability to prevent themselves from commenting on their observations, but use the facts they have noticed when they have a need.

These people are aware of the advantage they have by having superior intelligence as they do, but that often leads them to unnecessary vanity and inability to accept that they are wrong.

They also have to learn to say “sorry” which is something these people often have a problem saying. These people often try to force their opinion on others and they can instill a sense of inability and ignorance in others.

They often have a superiority complex regarding their intelligence and consider themselves smarter than the rest of the people.

Besides their obvious vanity regarding their wits, these people are very interesting and are a pleasant company to be around. People born with Mercury in Aquarius are quick thinkers and they have fast reactions as well.

They are very curious and have an inquisitive nature. Areas such as electronics, electricity, informational technologies, alien life, the space, and other similar matters are on the top of their interests.

The waste range of interests they have, make them a skillful conversationalist which can entertain people from different occupations. These people are usually very sociable and have many friends and acquaintances.

We can learn a lot from these people, and they can make our day by giving us a piece of advice no one else could have. So what if they think they are smarter than everyone they know. Their reputation is well-deserved.

People born with Mercury in the sign of Aquarius can be prone to procrastinating their duties and doing things in the last moment.

They don’t like rules or restrictions and have difficulty following them. They could also have an issue with authorities, especially school authorities.

It is likely that they have had their share of quarrels with their teachers growing up, and they have done their homework in the last minutes before class. These people are often used to doing things right before the scheduled deadline. It is their nature, and they can rarely be changed.

Although they are not brilliant organizers, they somehow manage to keep things in their lives in order. They tend to forget about the things and duties they don’t like.

Regardless of their rebellious nature and unwillingness to obey rules, as well as eccentricity and vanity regarding their intelligence, we mustn’t neglect the fact that these people have gentle hearts and are always ready to help.

They are true humanitarians, often sacrificing their time and assets to help people and humanity in general.

As a general conclusion, it is safe to say that people born with Mercury in Aquarius, both men and women, are very intelligent people, capable of creating things which benefit a lot of people.

They are stimulated by innovations, new things, progress, technology, inventions, and new discoveries.

They are often stubborn and refuse to accept other people’s point of view and change their own. They tend to stick to their opinion and refuse to say “sorry” even when it is obvious that they have made a mistake and they are wrong.

They are humanists with kind hearts, always ready to help anyone in need. Selflessness is one of the main traits of their character.

They are very sociable and tend to have a lot of friends and acquaintances.

They have a unique gift for problem solving and talent for using the details to come to the best solutions in every situation.