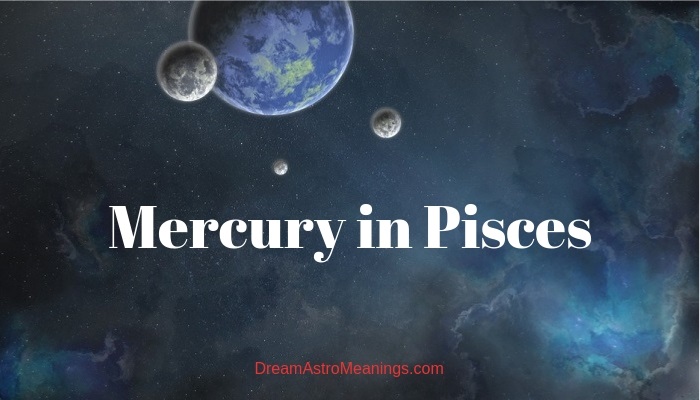 The planet Mercury is the tiniest in the Solar system, and closest to the Sun. It only takes around 88 days for it to circle around the Sun.

In an astrological sense, the planet Mercury has similar meaning, and rules intelligence, thoughts, thinking, education, school system, our communication skills, and our rationality.

Mercury rules our cousins, but also our neighbors and our immediate surroundings as well as our relations with the people from our surroundings.

The planet Mercury is the traditional ruler of the signs of Gemini and Virgo and its power is the strongest when it is in these signs.

Every sign this planet transits through blends its energy with its traits.

In this article, we are describing the traits of people born when Mercury was transiting the sign of Pisces.

Men born with Mercury in Pisces are very intelligent and have a heightened intuition.

They instinctively feel what others think or feel, and they act accordingly. They often have issues with communication because they don’t express their thoughts properly. They need to have more clarity of words and give enough details for people to understand them.

The sad part is that these people are usually unaware of this inability to express properly.

They should work on developing these skills to avoid misunderstandings and other kinds of damage which could occur due to this trait they have.

These men often struggle with concentration and tend to forget things. They often misinterpret people’s words because they are not focused enough or they recreate their words afterwards because they have missed to hear them properly.

They can be terribly absentminded at times and that is something they should work on resolving because it could only create problems in their life.

Men with Mercury in Pisces know what to say to make people satisfied and like them. It can be manipulation, but they often do it to make people happy as well as to make themselves happy. When they want to, they are able to manipulate people into doing what they want.

These men can be prone to changing their mind and beliefs often. People could get surprised listening to them saying one thing and the other day talking something completely opposite.

It is not a big deal for them. They believe that they have the right to change their mind even if that affects negatively other people. The solution is not to rely on their opinion and never ask them for advice.

The issues these men have, such as their forgetfulness, absentmindedness, lack of clarity and focus, etc. are something they should seriously work on dealing with because they can cause serious issues in their private as well as professional lives.

Women born with Mercury in Pisces often suffer from a lack of focus and concentration.

These women often appear completely present and listening while in fact, their minds are somewhere wondering. That often causes a lot of issues in their lives because they don’t remember important things and fail to accomplish their duties. That can be a huge problem when it happens at work.

They often have a tendency to create their stories from something people said. They replace the parts they didn’t hear or didn’t remember with their own interpretation and they remember their version. They often end up in situations where they convince people of things they never said or agreed upon because of that trait.

These women are not very communicative and are happiest when they are in the role of an observer. They are adaptable and usually do what the majority of their surrounding does. They are not leader types and agree with what other people decide. They often have a problem making their mind about things and tend to postpone their decisions until the last moment.

These traits of theirs don’t make them very dependable and can create problems in their private as well as their professional lives.

They need to work on developing their attention, concentration and focus. They also struggle with the clarity of their thoughts and expressing themselves in a manner that people can easily understand.

Another one of their potential issues with people is their tendency to change their opinion and beliefs.

That isn’t a problem when other people aren’t involved, but these women often give advice to other people and do the opposite of what they have advised them afterwards.

Such behavior can make people angry and avoiding their advice at any cost.

These women can be very secretive and hiding their private matters. They also don’t mind telling lies if the lies help protect some interest they have.

On the outside, they appear sweet and innocent and their appearance often fools people; although unfocused and absentminded most of the time, when they want something, these women can be very concentrated to get it.

The good traits of people born with Mercury in Pisces are intelligence, strong intuition, emotionality, sweet, psychic gifts, desire to please others, keeping their privacy to themselves, adaptable, etc.

The bad traits of people born with Mercury in Pisces are forgetfulness, absentmindedness, recreating reality, confused, disorganized, lack of focus, lack of persistence, lack of concentration, lack of attention, manipulative, sarcastic, easily influenced by people’s moods, secretive, changing their mind and beliefs often, lack of clarity when expressing themselves, etc.

Mercury in the sign of Pisces people are a pleasant company, but are usually not very talkative. These people love to stay by the side and observe.

They talk when they need something to say. They have an eye for details, but their intellect is often a bit confused and disorganized. These people are very intelligent, but often struggle with concentration and lack of focus.

They also tend to be forgetful or recreate reality. They are not very attentive listeners and often end up remembering as truth something they have created in their own heads. They don’t do this on purpose; it is just how they are, so it is difficult for people to be angry at them because they are usually very sweet, although they often make disastrous mistakes due to these traits.

These people are emotional, but they often mask their emotions with a mask of aloofness and distance. Some of them use sarcasm to mask their disappointment, hurt or anger. These people tend to be easily influenced by other people’s moods, especially the negative ones.

If someone is negative or angry, sad, or depressed, it is most likely that they will begin feeling in a similar way in a short while.

Their ability to sense other people’s feelings often is heightened and enables them to read their minds and know what they think. These people are very intuitive and often have some physic gifts.

Mercury in Pisces people usually don’t like to talk. When they feel inspired that can be a different picture, but most of the times they settle for listening to what others have to say, rather than being the ones others listen to.

There are several reasons for that. The most important one is their natural timidity and desire to be outside of the spotlight, and the other one is their need to keep their privacy to themselves.

These people can be very secretive and cautious about letting others find out things about their private life.

They adapt well to different circles of people. They don’t stand out much, and they blend in well because of that. Because they desire people to like them, they often tell things they don’t really mean.

These people are not very direct and consistent. They often don’t remember what they told you yesterday and they are prone to changing their mind and beliefs.

That can be disturbing for people who don’t change their beliefs that easily. With these people, it is best that you don’t listen to their advice. You might end up doing the opposite of what you truly desire, and not a long time after, seeing them doing the exact opposite of what they have advised you to do.

They simply forgot what they told you, and now it seems like a good idea for them to do it. They probably don’t see it as a big deal, but you might, so it is best not to ask them for their opinion, especially on matters that are very important to you.

These people often tend to avoid dealing with reality and instead retreat into their imaginary world. That can be consoling for some time, but when reality strikes, they end up awaken by a cold shower and they often don’t have what it takes to cope with the facts.

These people usually avoid making a final decision on a matter and tend to postpone its making until indefinite.

Their inability to concentrate and organize often represents a problem in their everyday life. They somehow manage to handle things, but a point comes when everything collapses like a card tower. These people need to work on building their focus and organizational skills.

Otherwise, they risk wasting their abilities and not being able to use their full potential to the maximum.

These people often have problems with expressing their opinions. They don’t express their thoughts properly and they end up being misunderstood. They are not aware of this problem they have and are convinced that they express themselves correctly.

The main issue is that they tend to keep a lot of information to themselves and say things partially, which at the end causes people to misinterpret their words.

They also need to learn to focus on what others are saying because they have a tendency to create imaginary stories based on something people said to them and be convinced that they are real once the conversation ends.

This tendency can create a lot of damage, especially in their professional life, but their private life as well.

They also need to learn to express directly and with clarity, so people wouldn’t second-guess their thoughts. They also need to become more persistent in pursuing their goals because they tend to give up when things seem heavy for them to overcome.

Mercury in the sign of Pisces is not a very good placement for this planet. In Pisces, Mercury is in its weakest position. It is in its detriment and its fall, which means it has no power and its good traits are diminished.

People born with Mercury in Pisces are absentminded, lack focus and concentration, are prone to telling lies and deceit, and secretive.

These people have the ability to manipulate people into doing what they want, and they often use these traits.

They lack focus and are bad listeners, which causes them to recreate facts and reality, convincing people of things that never happened. They are often unaware of the graveness of the problem these traits represent for their lives.

They are very adaptable and usually don’t mind others organizing them and telling them what to do. They are not communicative and prefer listening to others rather than talking. They especially dislike talking about their own affairs.

These people often avoid making decisions and facing reality. They often retreat to their imaginary world where things are perfect but they get suddenly awaken by the harsh facts of reality they need to deal with.

They are not organized and that often causes problems with performing their tasks and duties on time.

Another one of their issues is a lack of clarity when they want to express their thoughts and opinions.

These people often choose the wrong words, or they presume they have used enough words to say what they wanted, which often causes misunderstandings and further problems.