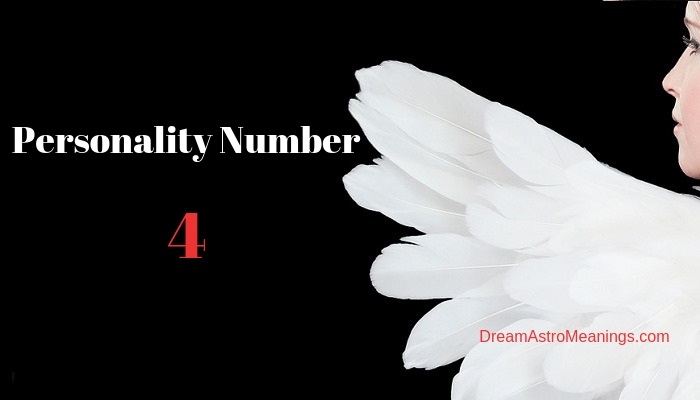 Solidity, reliability and integrity are the basic characteristics of this number. Every effort is made to carry out upcoming tasks. A person with the number 4 lives completes his work systematically, thoroughly and steadfastly. He designs insightful plans, implements them and is very productive.

Personality number 4 characters defend themselves or sometimes rebel against any attempt to change an established scheme. This attitude can lead to bitter disputes.

One can absolutely rely on the foursome adheres strictly to ethical principles. The desire to be absolutely sincere, however, can lead to indecision and doubt. But he tries to preserve his positive qualities such as sense of justice, sincerity and perseverance and to develop certain serenity. Tolerance and letting go are two essential life tasks of this number.

Personality number 4 people have a pragmatic side that motivates them to realize their goals consciously and step by step.

On the other hand, it marks a deep desire to be influential, to gain financial security and to realize their personal vision.

People with the number 4 lead a regular life and sometimes have fixed habits that they can hardly let go. They have a deep sense of family and are very loyal to traditions and partners. They are aware of their responsibility to the family and their own family and are careful with it.

They are used to doing everything alone. They achieve their goals step by step. In addition, the 4 is characterized by incredible willpower, loyalty and tenacity.

The number 4 proves an excellent organizational ability and is often seen as a strong leader. She has a strong sensitivity, but mostly hides her feelings. She leads her own life methodically and has a clear idea of ​​what she wants.

However, when things do not go the way they think, then this personality often has difficulty accepting life as it is. She often shows certain stubbornness and can deal with changes difficult.

Often, she feels personally offended when others quickly change their opinions or existing arrangements in interaction with her.

“The number Four” is the number that most closely approximates our task in this life, is the material number par excellence, the solid and secure base, and the first step to carry out this task. Bringing order, organizing and empowering are the strengths that will influence who owns this number, it develops self-discipline can be an example for those less rooted in the material, a guide for others, has willpower and is not attracted from bizarre ideas.

Using traditional and established methods to solve a problem is less prone to novelty, more cautious. Its strength is drawn from stable situations, its slogan is concreteness.

The most suitable place for the four is in contact with nature and the earth, if this is not possible, create a small garden, with some pots, at home or on the balcony, this will allow you to appreciate your innate qualities as guardian of the fruits of the earth, this aspect can make you commit to protecting the environment.

The awareness of being a Four can induce you to use your qualities to create and externalize what is in your multiple capacities. If these qualities were not as precise as described, for those who have a Four in destiny it is recommended to practice rooting, we all lack grounding, so the advice is extended to those who want to understand its importance, follow the reference link to Rooting exercise.

The preparation in the work is the construction industry, all the manual work, even the administration, also has excellent skills in the organization of work.

This number is associated to matter and to the Earth in particular, just as the Earth is linked to the four cardinal points North, South, West and East. For the Pythagoreans the 4th or Tetrade represents justice, as it is equally divisible by both parties.

One of the symbols referring to the four is the cross, a pre-Christian symbol, the word “cross” probably derives from the Sanskrit krugga which means “stick”; the Greeks called it stauròs, “palo”; the Jews’ es “tree” these names confirm the primitive origin of the cross that represented the union of the opposites, above-below, right-left, the life with the horizontal axis: the ground or the horizon on which lives ‘man, the vertical axis: the earthly path from birth to the death of the body, growth from bottom to top or ascension of the soul to heaven.

Time, connecting in the vertical line the past (below), the present (intersection with the horizontal line, representing the existing) and the future (the high), that is yesterday, today and tomorrow.

The reference for 4 is above all the material dimension of existence. His commitment is focused on the realization of his economic security.

He loves to surround himself with everything he can possess and could fill his home with many things that are mostly useless; he represents the classic earth-earth type.

The 4 begins to focus and to discipline his efforts with a primary objective the realization in social and work but also to create a family, want to feel useful bringing the result of his work.

Third evolutionary step the evolutionary leap puts the 4 in relation with the community and its work shares it with others for the common good.

He also becomes a messenger of truth and justice, being aware of being part of the whole.

The decade that results from the quaternary is a symbol of perfection and key of the universe. It contains a profound teaching that leads back to the creator, obtaining with this union the power, spiritual intelligence and love.

The fourth letter of the Hebrew alphabet Dalet. Its function is Solidity. Matter is the concentration of energies and dynamics that hold these energies together in an orderly manner.

Solidity is concentrating energies to make visible and tangible, giving consistency and stability to a thought, project or dream. The subject originates from the four.

Number 4 is stability, rationality, foundations, marks the transition from movement to identity in a form.

Solidity is also repetitiveness, return to oneself, confirm to give consistency to an idea, to a way of being, to a situation.

Number 4 is the incarnation of Creator Love in every living being.

The number 4 represents the solidity and everything that is tangible. It was used by Pythagoras to refer to the name of God. This is because, for this philosopher and mathematician, the number 4 was perfect.

In Numerology, the number 4 translates into stability and progress in people’s personalities. Indicator of organizational capacity, its blockage, on the other hand, indicates difficulties of progression.

It is connected to the symbols of the cross and the square. By virtue of this connection, especially with the cross, it is a number of great values.

In Japan, there is a superstition that the number 4 is linked to death. For this reason, it is avoided that it be pronounced.

In the Bible, the Book of Revelation indicates the idea of ​​universality of number 4. In this book are mentioned situations in which the presence of the number is frequent.

Thus, there are 4 knights who bring the 4 larger plagues. There are 4 destroying angels occupying the four corners of the earth. There are also four fields of the twelve tribes of Israel, among others.

Finally, there are 4 evangelists (authors who wrote about the life of Jesus): Matthew, Mark, Luke and John.

For these reasons, the number 4 includes the sacred aspect. The number 4 has certainly a strong symbolic background and as your personality number it can certainly put you forward in front of many people.