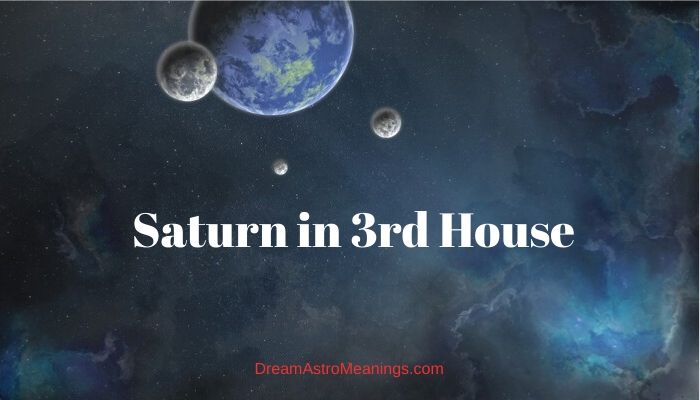 Natal chart or a horoscope is a unique complex representing the position of planets in the exact moment of a native’s birth.

According to astrology, this unique birth pattern could tell about the person’s potentials and predispositions in life.

Three are the basic components that constitute a natal chart. They include signs, planets and astrological houses.

Some authors offer a theatre analogy, in order to illustrate their interaction and make the whole complex more understandable to us.

Planets could be understood as actors, signs as roles to play, and houses as a stage. The whole natal chart is a unique, unrepeatable scenario of a native’s life.

This field is associated with early education, the attitude of the native towards knowledge and learning, the attitude towards immediate surroundings and the closest environment.

This field is linked to traffic, transport, movement short trips, contacts from everyday life. It tells about one’s relation with neighbors, colleagues, siblings and generally people whom the native regularly meets.

Potential communication problems, arguments, lack of comprehension and understanding, the question of compromises and tolerance could be discovered through the third field.

This house is also related to our problem-solving skills, analytical and logical mind, the efficiency and pragmatism. The attitude towards the environment and our understanding of the environment would play an important role in here.

Our ability to distinguish what is important and what is not, out of all the information the environment serves to us, is associated with the Third House.

The Third House is an especially interesting field when it comes to connections throughout the natal chart. It is useful to know if this house was empty or there were more planets, as well as what aspects planets in the Third House form with those from other ones.

It is good to know how it communicates with other houses in the natal chart, because it could make the complicated pattern of a unique individual chart less perplexing.

Saturn was a Roman deity of agriculture and prosperity, specifically linked to riches of the seed-corn. He is somewhat similar to the Greek god Cronus and his role in genealogy of the ancient gods appears to be the same.

However, as Greek and Roman mythologies are interwoven and as there were also other, even older beliefs, it is difficult to make a clear distinction between many gods and their functions in the ancient societies, their culture, religion and tradition.

Some authors claim that Saturn or a deity who later became Saturn in Rome, existed long before Roman contact with Greek culture and religion, which they admired and overtook, adding further functions, symbolism and meanings to different gods, creating their own versions of mythical stories, et cetera.

He was considered an outcast god, as he fled to Italy and settled in Latium, after his fall by the hand of his own son, Jupiter (in Greek mythology, it was, of course, Zeus. Let us tell this myth in brief.

According to the origin myth, Saturn (Cronus) was the son of Uranus and Gaea, the sky and the earth, one of their titan children. As Saturn overthrew his own father and castrated him, he was afraid the same would happen to him.

The Greek myth tells that Crouns devoured his children, in fear for his own rule. However, Zeus was saved by his mother Rhea and he did take revenge upon his cruel, devouring father. Defeated and fallen, the god fled.

The Roman myth says he fled to Italy and settled on the Capitolium, known also as the Mons Saturnius, which suggests people of the region admired the deity. True, they were deeply in favor with Saturn.

According to the story, Janus, who was one of the greatest old deities of Rome and ancient Latium, welcomed Saturn and handed him over the rule over the Capitolium. The time of their reign over the region was a golden age, according to tradition, aetas aurea.

It is said that Saturn taught people agricultural practices and work; he had taught them how to cultivate the land, how to grow wines and he would also make sure that the harvest was plentiful.

Saturn was worshiped as an agricultural god, the god of seedtime, harvest, joyful and fruitful seasons. His pleasant reign was, according to the legend, a time without wars, diseases and poverty; it was a blessed time, peaceful, rich and happy.

After Saturn disappeared, an altar had been built as a place of his worship. The legendary king Tullus Hostilius introduced Saturnalia, joyful festivities in Saturn’s name.

One of the oldest sanctuaries in Rome was the temple of Saturn, built on the Capitoline Hill.

The cult statue of Saturn was shaped up after Greek Cronus; he was usually depicted with a scythe in his hand. The cult of Saturn was very popular during the time of Roman Empire.

Let us just mention that joyful Saturnalia first lasted for three, then for five and eventually for seven days!

Unlike much adored Roman Saturn, the astrological planet Saturn is not considered a welcome guest, when it comes to natal charts.

The planet reminds of Cronus, rather than of Saturn, but let us not be too hasty. Saturn is, indeed, a malefic planet; in fact, the ‘worst’ one, many would say.

However, Saturn is much needed in our horoscopes and we shall see why that was so. Saturn is one of the social planets, the planet of restriction, limitations, boundaries.

Saturn is the planet of control and fear. Saturn is, in fact, a response to some of our fears. When it forms an aspect with another planet, it tries to control it, in order to save us from a threat.

The problem is that not all threats have to be avoided and not all fears something we should stay away. Saturn sees to control and cage everything. The symbol of Saturn suggests that the soul is trapped inside the physical, limited form.

Some call it the planet of suffering and, indeed, Saturn is the planet of poverty, misery, illness, old age, despair, misfortune and all kinds of negativities.

Saturn governs isolated and abandoned places, gloomy and dark corners. Saturn is the planet of isolation, ascetic life, loners, and old people. This planet is a cold and cruel tutor of life; its lessons bitter and hard to swallow.

However, we have said, let us not be too hasty judging Saturn. Without this planet, we would hardly know what is the meaning and importance of traditional values, of heritage, ancestry.

Saturn teaches us patience, endurance, lasting in time, responsibility and organization. Saturn is identified with form and structure; we need at least a little bit of it in our lives.

While Saturn’s lessons are not particularly joyful and pleasant, they are necessary. After all, people are like children and it is good to remain a child at heart for as long as it is possible, even forever. We hate boundaries; we love liberty and expansion.

Well, it could devour us, if we do not learn how to restrain it. Saturn gives us this ability, though its energy could be really troublesome, depending on the planet’s position and aspects.

Saturn in the Third House – Saturn in 3rd House

Saturn in the Third House indicates a personality of a research nature; people with Saturn in this position have an analytical and logical mind, so they quickly reach the essence of a particular subject or a problem.

They are efficient, pragmatic and quick in finding solutions to various types of problems and situations.

Natives with Saturn in the Third House present with excellent organizational skills and are very clear in communicating their ideas.

People readily rely on Third House Saturn individuals, since these people are very clear in their intentions, analytical, tactful, logical and practical.

Such people know the importance of order and structure and are efficient in making it come true, in various circumstances.

They are rational, quick-minded, open, direct and strict in following a set of principles and rules, especially if those have to do with science and research. These people tend to be objective and guided by facts; they do not let emotions overwhelm them and distort their perception of a situation.

For example, they are capable of resolving problems within family. They would be the voice of reason and would easily come up to a most practical solution that would likely satisfy everyone. They do not waste words on lingering promises or on unchecked ideas.

Although not especially emotional or compassionate, it does not mean these natives were cold and reserved; on the contrary.

They tend to be communicative, open and honest. They are empathetic, but they would not let emotions cloud their reason. With good aspects, Saturn in the Third House makes for a perfect balance between reason and emotions, the subjective and the objective.

These people maintain good interpersonal relations, because they are very open and clear in communication. They have no troubles expressing their opinion and they restrain themselves exactly when needed.

In addition, they are empathetic enough, so they understand people on many levels. In turn, others understand them, as well.

People with favorable aspects of Saturn in the Third House are rational and they use common sense if there was any problem regarding interpersonal relations, especially within the family and with their siblings.

They have a strong integrity and authority in their environment, which usually makes them a role model to younger ones. People know they could trust them and rely on their rational and practical solutions and advices.

These natives are typically benevolent and graceful, which might sound a bit strange, considering we talk about Saturn, the malefic planet.

Well, their benevolence comes from their inner content and calmness. They are content, because they know their limits, they have clear goals, they know how to express their ideas and they understand other people. They present with an amazing control over communication.

They know how to deal with people overall. These natives are highly realistic individuals, so no one could trick them easily.

On the other hand, they are unlikely to use their fantastic controlling skill in order to manipulate the conversation; it is not in their honest and fair nature. The objective perspective guides them through life.

Saturn in the Third House – Skepticism and Misunderstanding

If Saturn in the Third House were in bad aspects, the native is likely to have troubles in communication with the environment, society and family. This native cannot express own ideas very well, so is often an outcast from the society.

Bad aspects of Saturn in the Third House thus lead to emotional isolation and retreat. Such people are lonely, because they are afraid of saying what they feel.

Such a native loses touch with reality, which is opposite of favorably positioned Third House Saturn.

The native feels as if nothing goes the way he or she would like, since the native cannot communicate their ideas very well and faces walls of misunderstanding. In addition, heavily positioned Saturn in this field often indicates arguments and lack of understanding in family relations.

Relation with brothers and sisters is under attack; there could be tense relations, even strong rivalry and enmity. The native usually feels as if the closest ones do not understand him or her.

Unfavorable aspects of Saturn in the Third House are generally characterized by poor communication skills and distorted comprehension on both sides.