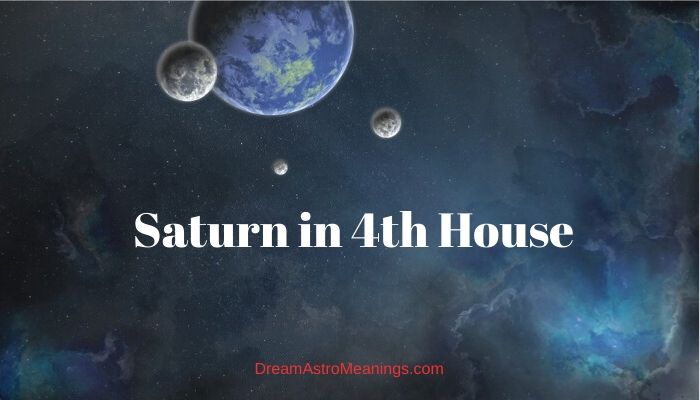 If you were interested into astrology and natal charts, you have certainly come across the concept of astrological houses. Astrological houses are one of the moving parts of individual birth charts.

Each astrological chart is divided into these twelve fields – houses. Houses are like a stage of our destiny; they are a stage for planets-actors to play their roles, associated with astrological signs.

Houses could give us an insight into our past, present and future as each one of them represents an area of life.

Planets that affect these areas, being placed into particular houses, forming specific aspects, and this interaction creates our unique experiences related, naturally, to various segments of our lives.

Each specific combination is a piece of an individual, genuine astrological pattern, the natal chart, unique as a fingerprint. Isolated combinations, a planet plus house, such as in our examples, are precious pieces that form our natal chart.

The Fourth House is identified with family, birth, ancestors, parents and parental influence, family home and atmosphere, property and possessions, stability and comfort.

The Fourth House is identified with the bases of existence, with grounds of existence, beginnings and endings. This house tells about one’s attitude towards tradition, family values, homeland, ancestors and own family tradition and heritage.

The Fourth House is a Water element house, analog with the sign of Cancer. Cancer is the sign associated with family and with service, empathy, sympathy and emotions.

The Fourth House is the base of an astrological chart, as it literally sits at its base. Well, the base of peoples’ lives are, indeed, their home and family.

Planets inside this house would tell about the native’s relationship with parental figures, especially the figure of mother. Domesticity is one of the terms associated with the fourth field.

This house reveals where you come from. It is about your roots and origins, in a wide sense, but with an actual focus on family and ancestral heritage.

In addition, it also represents one’s final years of life, as it is the house of both beginnings and endings.

Saturn was a much adored deity in the ancient Latium. After being overthrown by his son Jupiter, Saturn, according to Roman mythology, fled to Italy. He was welcomed by Janus, who handed him over the rule over Capitolium, where Saturn had settled.

It was said that during their time there was no war and diseases across Latium, no poverty and hunger. People have lived in peace and happiness, their barns were full, their harvests plentiful.

We will not talk about Janus, but let us only mention that he was one of the oldest deities in the region, a god of beginnings, amongst other functions. The myth of Saturn, however, is interwoven with Greek mythology. Well, Greek tradition was Romanized and vice versa.

The role of Saturn is pretty much the same as that of the Greek Cronus, in the myth of the origin of gods and their genealogy.

However, the attitude towards these deities is different. While Greeks were not in favor of Cronus, who was considered a cruel titan, Saturn was much adored by Romans. Some authors suggest that Roman Saturn existed before introduction of the Greek religion.

They associate Saturn with Etruscan god Satre. The name Saturn is sometimes linked to the term satus, which means ‘sown’.

Roman god Saturn was worshipped as an agricultural deity. He was associated with seedtime, harvest and agricultural works in general. He was closer to earth and fertility deities, such as Greek goddess Demeter and Ops, the goddess of harvest, who was Saturn’s wife.

The rule of Saturn over Latium was a golden age. Saturn gave people some laws to live by, he taught them how to cultivate their lands, how to work the soil, how to grow wines and so on.

One of the oldest temples in Rome was the temple of Saturn, built bellow the Capitoline Hill. Well, the hill itself was also known as Mons Saturnius, the mountain of Saturn. People of Latium adored and admired this benevolent deity.

Saturn was associated with seedtime and plentiful harvest, with prosperity, joy, happiness and harmony. All goods of the earth and fruits of the land were linked to him.

At one point, Saturn disappeared, but Janus built an altar for Saturn to be worshipped at. He also introduced the date of Saturn’s worship, whole Tullus Hostilius, a legendary king of Rome, introduced Saturnalia, the joyful festivities held in Saturn’s name. During these festivities, everything was allowed.

These festivities first lasted for three days, but then they were prolonged to five and finally to a whole week of song, drink, food and fun!

The festivities marked the end of the agricultural season and the beginning of a fresh agrarian year. Saturn in Roman mythology was considered a good, benevolent god, a great benefactor of humankind.

Although the planet Saturn carries the name of the Roman god, its nature could be associated with Cronus, rather than with the deity of plentiful harvest.

Some authors call it the planet of suffering and, indeed, Saturn is not a particularly pleasant fellow to have around. Many are afraid of its influence over the natal chart. However, the role of Saturn could be very useful.

In astrology, nothing was black and white, although we like to think in oppositions and we find it practical to simplify things.

However, while planets could be benefic and malefic, their functions are never ultimately good or completely bad.

Saturn is a malefic planet. In fact, it was the most malicious one and its position should be studies carefully. First, Saturn is the planet of restriction and control. We do not like control, if it means something or someone controls us.

Therefore, we find Saturn’s influences negatively limiting. Curiously, if it was in bad aspects, it usually means that we restrain ourselves and feel tense and miserable about it.

Saturn is the planet of old age, of the soul trapped inside the body, of dark, gloomy and isolated places, of illness and poverty. Saturn reminds us of threats and dangers in life and awakens our urge to control things.

It awakens our fears and makes us cautious. It brings all kinds of troubles and misfortune and its influence is often bitter and unpleasant. However, we should try to understand it, instead of fighting against it.

However, its effect greatly depends on the position and the aspects it forms. On a good side, Saturn is the planet of patience, tradition, history, heritage and ancestors. It keeps values and makes them last in time; it preserves traditional values.

While it appears good, per se, this also leads into stagnation, it prevents growth and progress; more like Cronus and not Roman Saturn.

Saturn is a strict and cold tutor. It teaches us order and discipline, responsibility and organization. Saturn prevents us from casting away old habits and values, which is, of course, a two-sided blade.

It could keep us in the past and prevent us from moving forward. It requires great effort to accept its lessons and overcome troubles it brings along.

Heavy, limiting and controlling, Saturn help us preserve things, values, systems and else through time. Without it, nothing would have value to us; nothing would ever last. In that sense, Saturn actually gives meaning and value to certain things and concepts.

At last, it is a social planet. Social planets represent ourselves as members of the wider society and our urges needed for our integration into it.

Saturn in the Fourth House – Saturn in 4th House

What does Saturn bring into a family home? How it affects the house of domestic values, the hearth and home?

Well, Saturn is a bit heavy planet, so let us see what do we have hare. Saturn in the Fourth House indicates an expressed tendency towards creating harmonious relationships within the family, especially the closest family.

It represents a tendency towards maintaining good relations with parents, for example, and members of the closest family. However, it also indicates difficulties related to such relationships.

This is a tricky and a complicated position. This placement of Saturn indicates periods in life in which the native grows distant from family members, in order to become more independent.

While this does not have to be something problematic and unnatural per se, there could be some sort of a difficulty in the initial nature of such a relationship.

For example, the native could feel guilty about distancing, without his or hers family members blaming them. It could happen also because they do blame him or her for getting distant and breaking away.

These are all very fine differences and they depend on the native’s chart and aspects. The native often feels as if there was a problem in communication with family members.

There is a constant feeling that one should try very hard in order to create a harmonious relationship with the family. One of potential problems is the controlling nature of Saturn.

However, what he or she forgets is that there were other people involved; they should do their part as well.

The native with Saturn in the Fourth House tends to be at service of the family; he or she feels as if it was their duty to make things work. Well, the truth is, it depends on everyone. As soon as a Fourth House native accepts this fact, things would very likely get smoother.

When Saturn in the Fourth House forms favorable aspects, it usually indicates a rational, serious and responsible personality who takes care about the family and loved ones.

However, such a native realizes their own limits and knows he or she would do what was in their might to make things work, but would not lose feel guilty if things were not that harmonious. This person has a rational, practical and diplomatic approach.

He or she would always be at service to the family, but would not let being manipulated. He or she nurtures family relationships, cares about family values, tradition and home, but does not neglect personal interests and desires.

This person is a natural born diplomat. He or she readily collaborates with other people and enjoys working in a family-like environment.

Typically, such natives form strong and fruitful business relationships and also maintain positive relations with people in general and especially with family members.

A characteristic of well-positioned Saturn in the Fourth House is existence of an incredibly strong bond with one of the parents. When it comes to own family and romantic relationships, this is a native ready to make compromises.

On the other side, if Saturn in the Fourth House was not in good aspects, it indicates a native who is terrified of loneliness, but who, at the same time, has difficulties in finding a partner who would meet their expectations. Such a native often feels lonely and emotionally unfulfilled.

In addition, natives with badly positioned Fourth House Saturn tend to be overly controlling, in both romantic relationships and in family.

A dominant attitude comes from fear of actually losing control over situation. The native supervises family members making them feel uncomfortable and under inspection, which definitely is not a pleasant family atmosphere. It is a common cause of many arguments and conflicts.

The same applies to romantic relationships and any other environment that could possibly resemble a family pattern.