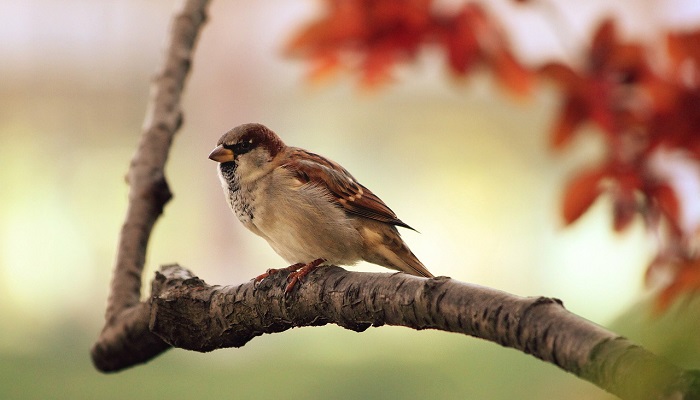 Sparrows are adorable little songbirds. Long ago, they inhabited only parts of Europe and Asia, but today these singing fellows are to be found all over the world. Just as they larger sized relatives, pigeons and doves, sparrows are a common sight in urban areas.

They are small, but tough; sparrows live through various weather conditions and never lose their vivaciousness and spirit, it seems.

In our day, it could be said they are one of the most widespread bird species.

Almost every country and tradition has their own name for this little brownish bird. There are various names for sparrows, of which some are particularly interesting.

These inspiring names are, of course, related, to the very nature and behavior of this little songbird. For example, in Great Britain, sparrows are called something like ‘dark little runner’, in America, they call them ‘English sparrow’, but also a ‘flying potato’.

In Slavic, namely Serbian language, sparrows are called ‘dzivdzan’, which is a name derived from these birds characteristic sounds.

In addition to various names, sparrows are usually considered harmless and helpful little ones. In countries and traditions around the world, they are often believed to bring good luck, hope and joy.

The most common symbolic concepts associated with sparrows are hope, happiness and new life.

Sparrow motifs, although not commonly, are found in remains of one of the oldest and greatest empires of Old Age, Egyptian tradition. There are hieroglyph inscriptions featuring symbols of sparrows.

It is interesting to note that particular hieroglyph, the one depicting a sparrow, has no phonetic value, but it is used to mark something that is small, tight or bad.

In Ancient Egypt, people believed sparrows carry souls of ill people, that they catch their souls, actually. In Ancient Greece, a term for a sparrow was commonly used to describe any of little bird species member. 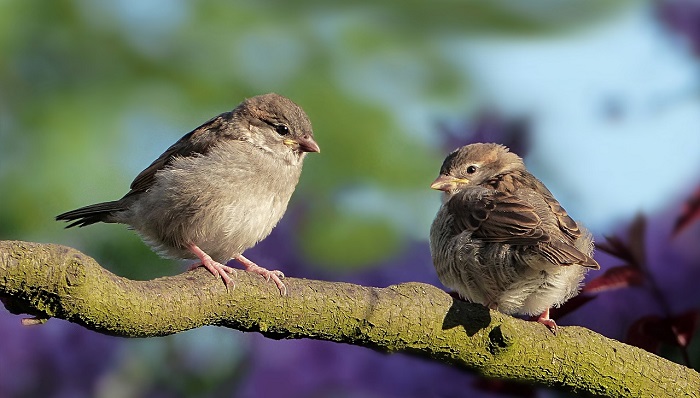 Ancient Greeks were in favor with sparrows; in Ancient Greek mythology, sparrows were related to the beautiful goddess of love, Aphrodite.

Ancient Romans have also appreciated this little bird and even held it as a pet, just as we keep parrots, even if sparrows are not of particularly vibrant appearance and their songs are not even particularly melodic or catching, compared to other birds.

However, Romans loved sparrows; they believed that hurting or killing a sparrow brings bad luck, misery and misfortune. In Ancient Rome, sparrows were believed to be spirit protectors or totems to grieving mothers.

One of common associations with sparrows is travelling, especially sea travel. It is believed sparrows bring good luck to sailors and give hope the trip will be successful and without difficulties. Sparrows are sailors’ talismans and luck bringers. Many sailors would tattoo a sparrow image or a motif before they set sails.

One of the most popular movie pirate in modern cinematography is called Captain Jack Sparrow, a trickster and in a way charming and funny character from popular movie series Pirates of the Caribbean. In general, sparrows are believed to be a good omen and a fortunate sign.

Sparrows play an important role in Serbian modern culture. A sparrow is a symbol of its capital city, Belgrade. This joyful fellow represents spirit of Belgrade and its people, their modest, joyful, friendly and vivacious attitude.

Sparrow is a mascot of the city and its motif is commonly used to mark certain events and occasions organized by the city, such as sport festivals, manifestations, touristic events and so on. Sparrow motifs are to be found in other places in Serbia, also as a trademark.

Throughout history, population of sparrows has varied, but it was generally increasing.

With peoples’ migrations from Europe to other continents, sparrow population spread to other parts of the world. Intentionally or accidentally, people brought sparrows to Americas, Australia, Africa and New Zealand. European sparrows were intentionally brought to the United States, during the second half of XIX century, in order to reduce population of pests.

From 1883., this idea got completely opposite vibes and it was considered a complete disaster!

From Roman Ages to modern day, the image of sparrows has changed. Once popular birds are now taken pests in some countries. In addition, sparrows’ population over Europe suffered, as well, due to presence of larger birds, air pollution and other factors.

However, you could still see people sitting on park benches and feeding little sparrows and pigeons bread crumbs.

Some people leave food for these little birds or build birdhouses in trees. Sparrows are still considered joyful and lucky fellows, all over the world.

Tiny sparrows are also present in art and literature. These little fellows are commonly associated with humans and people have ascribed them many traits and characteristics found in humankind.

Sparrows are considered optimistic, liveliness, excitement, positivity and dedication. Many poets would use a sparrow motif as a metaphor for looking at life through pink eyeglasses, with optimism, calmness and without worrying too much.

Because of that, sparrows are a common motif in children stories and poems.

One of the famous English poets, William Blake, mentions a sparrow as a metaphor for passion and sacrifice, in his poem The Blossom, from his Songs of Innocence.

Many notable artists featured sparrows in their artworks; we know of Vincent Van Gogh and Franz Mark studies, for instance. This little brownish bird has an incredibly strong symbolical value for people, even if the bird is neither rare nor most beautiful of birds.

Sparrows are of a simple appearance and their songs are just pleasant, cheery.

They are small, of brown-black-grey feathers and smart, onyx eyes. Little sparrows symbolize many big concepts, such as endurance, persistence, happiness and generosity.

Sparrows symbolize dignity and self-confidence. These little birds are intelligent and skilful.

They are also courageous, regardless of their size. These little birds symbolize the strength of something that appears unimportant or even fragile.

This little birds help us realize true importance and strength is not always is something that is glorious, pompous or of astonishing beauty. Many people use sparrow symbol or a metaphor to get motivated.

Sparrow symbolizes love for yourself; this small bird does not seem to underestimate its skills, and is ready to face harsh living conditions and much bigger rivals.

Little sparrows are quite sociable birds; they are usually seen in large groups, always doing something together. Thus, a sparrow symbolizes friendship, sociability, friendliness, kindness, diplomacy, cooperation and colleagueship.

This bird symbolizes mutual understanding and help, as well as compassion. Sparrows represent the deepest feelings we humans have for other living beings.

The motif of a sparrow stands for mutual respect, care, love and nurture, some of the highest values of humankind.

Modesty, harmony and joy of life

Sparrows are not as flashy or elegant birds as some other species, so they represent modesty, humbleness and peace.

These birds are true example that beauty and joy are commonly hidden within things and ideas that appear plain and uninteresting.

To see the true beauty of life, we have to be modest; we have to value everything we have, from the most little thing, too great, brightly shining ideals and fantasies.

This bird appears small, weak and fragile, but, in fact, sparrows are quite tough little ones.

They could survive harsh weather conditions and they do not go south in wintertime. They are capable of adapting to various conditions, so they represent adaptation, toughness, courage and skillfulness.

Their feathers also make them easy to camouflage and hide, in order to avoid predators.

Sparrows symbolize strength in fragility, cleverness and intelligence. They have to outsmart bigger animals, in order to save themselves. They teach us to be smart and cautious, when situation requires that.

Sparrows are known as hard-workers. You will never see them resting or sitting in one place for long time. Sparrows are always busy!

That is the reason why they symbolize dedication, having goals, persistence, endurance, productivity and hard work. Sparrows are organized and practical, so they represent these ideas, as well.

Sometimes, a sparrow motif is a metaphor for hard work, needed in order to build something big from nothing, as we people love to say.

Since they are small and not particularly noticeable, but very lively and hardworking, sparrows symbolize the idea of making great things, step by step.

Sparrow totem is an incredibly inspiring little guide. Above everything else, it teaches you to love yourself, to love the world you live in and people you are surrounded by.

Sparrow totem teaches that generosity, good relations, kindness, but also pride, courage and belief in yourself are things that matter. Sparrow spirit will help you realize life is full of small wonders that you should learn to appreciate.

This totem is powerful and it is oriented towards self-development, above other things. This totem will help you see the good side of all things in life.

Sparrow totem teaches self-respect, self-care and acceptance of your own personality, with all the qualities and flaws.

You are weak sometimes, and tiny and fragile, but you are also strong, capable, beautiful in your own way. Once you embrace who you are and stop fighting your own negativities, you will be able to improve them.

Sparrow totem wants you to know that you are someone special, but not above other people. Sparrow totem values friendship and teaches the importance of creating bonds and good relations with people.

It tells you not to take things in life too seriously, but that you still fulfill certain duties you have chosen to take on yourself. It tells you to share love with other people and never restrain your true emotions, but never to the point of hurting someone or hurting yourself.

In addition, sparrow totem helps you feel good about every single little miracle that happens and never to forget it, even during darkest times.

Spirit of the Sparrow gives you strength and courage to overcome challenges of life, by learning to appreciate every goal you accomplish, no matter how small or unimportant it might appear.

Everything matters and you are the one who has true power to see it. Sparrow totem brings joy, happiness and invites you to relax and sometimes simply surrender yourself to little pleasures.

Do not stress yourself with everything, all the time, a mistake we commonly make. Everything in life has its place and time; there are times for tears, as well as there are for laughter.

Dreams about sparrows are usually considered good omens. If you dream about a sparrow, it could be a lucky sign or an indication of a happy event in near future.

It could also mean you will have to work hard and stay focused on your goals, but everything will pay off eventually.

A sparrow in dream could be your inner voice saying that you should embrace and love yourself just the way you are.