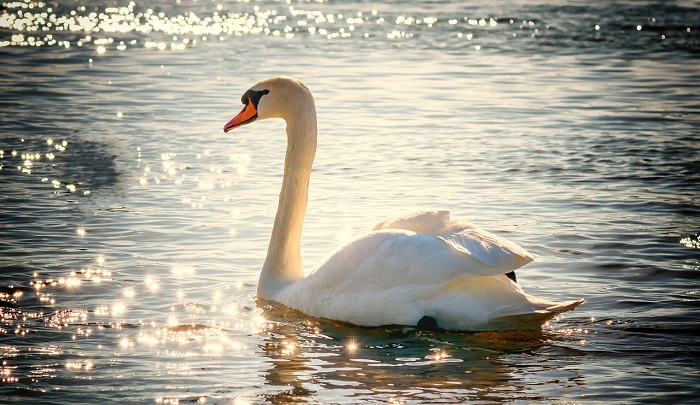 Swans belong to the Anatidae family and the genus Cygnus. These birds are relatives to ducks and geese. These birds often mate for life and if one of them dies, the remaining bird will usually find another mate.

Many people ask themselves: can swans fly? The answer is yes, swans can fly and they are actually one of the largest existing flying birds. The largest of them can reach up to 1.5 meters in length and could weigh around 15 kilograms. Their wingspan often ranges over 3 meters.

These birds are known for their unusually long and elegant necks. Males and females resemble each other, but a male swan is bigger in size than a female swan.

Swans don’t have teeth, but their beaks have edges which look like small teeth, which they use for catching some of their prey, usually algae, mollusks, fish, worms, and frogs. They live mostly in temperate environments.

Swans don’t live in tropical climates, and that is why they are not present in Central America, the northern parts of South America, tropical Asia and all of Africa.

Many swan species are migratory or partly migratory.

Swans feed both on land and in water. They eat mostly plants, such as tubers, roots, leaves submerged under water and small aquatic animals. They become mature between the age of 4 and 7.

Swans are known for forming monogamous relationships which last many years, sometimes even their entire life. Both partners take part in building their nest, which is usually on the ground near water.

In some species, both partners take their turns incubating the eggs, and in others the male swan, called the Cob, keeps the female and the nest guarded from potential intruders while the female incubates the eggs.

The female swan, called the Pen, usually lays 3 to 8 eggs, which she incubates around 34 to 40 days.  Swans, usually females, are very protective of their nests and will fiercely attack anyone who tries to hurt their chicks. A young swan is able to run and swim only a couple of hours after hatching from the egg. The Cygnets (young swans) are usually taken care of by their parents for several months. Some species even ride on their mothers backs.

Swans communicate with each other using different sounds, such as hissing, grunting, or snoring.

Swans don’t have many natural predators, and their biggest threat is the human. Swans are hunted for their feathers and their meat. Swans are also preyed by foxes, wolves, raccoons, etc. 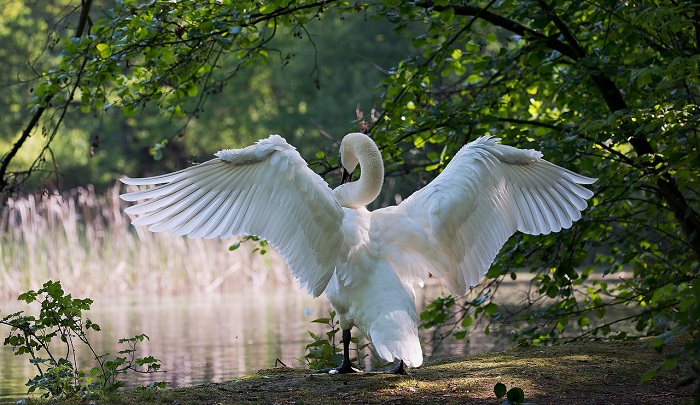 Their eggs are also considered a treat by many predators. The loss of habitat and water pollution is also a big threat to their survival, and is noted that their population is in decline.

There are seven known species of swans. The Black Swan is one of them. These beautiful birds are mostly found in Australia. This species is known to have the longest neck of all swans’ species.

The cob and the pen both participate in building the nest and they take care of their young for a period of six months after they hatch.

What does a Swan Symbolize?

They are often considered a symbol of fidelity and love because of the long- lasting monogamous bonds they tend to form.

They also symbolize the development of our intuition and awareness. They often represent the change of our way of thinking and just accepting the flow of life.

A white swan is a symbol of purity and positive thoughts. It also symbolizes the releasing of negativity. It is also a sign of the process of spiritual growth and spiritual enlightenment.

A black swan symbolizes equality, joy of helping others, and inner mysteries. It is often considered a sign of something mysterious and forbidden.

The phrase black swan appeared first in Roman times, in the poems of the poet Juvenal in the 2nd century. In these times, it was considered that black swans don’t exist and the phrase was used to describe something unbelievable and nonexistent.

After it was discovered that a dark swan actually exists, the expression black swan changed its meaning and it was used to describe the idea that something once considered true could be later disproved.

The Swan Meaning as a Spirit Animal

The swan totem can have many different meanings. Here are some of them:

Union and partnership. The swans are a symbol of union. They usually spend their lives beside a partner they have chosen at a young age. The swan spiritual animal is teaching you to respect and treasure the relationship with your partner. It is giving you the gift of appreciation of a union you share with the one you have chosen to be your companion for life.

Fidelity and monogamy. The swans are usually monogamous birds which spend their entire lives with one partner. If the swan is your totem you are most likely a “one partner for life person”. You appreciate the partner you have chosen and the love and attention you mutually share.

Motherhood and parenting. Swan mothers are very devoted and protective of their young. In fact, both parents are very nurturing and caring for their offspring and defend them fiercely against potential danger. The swan totem animal is teaching you the gift of good parenting and caring for your children. With the swan as your totem animal, you are most likely a devoted and caring parent who would do impossible things to protect your children.

Calmness and peace. Swans peacefully glide over the water surface. Just by looking at them elegantly moving across the water instills a feeling of peace and tranquility inside you. The swan totem animal is giving you the gift of preserving your calmness and peace in difficult moments or times when you need to make important decisions and take decisive actions.

Going with the flow. The swan spirit animal is teaching you to go with the flow of life. It teaches you not to resist the life currents but be one with them. This totem animal teaches you to accept changes instead of resisting them.

Beauty. The swan is one of the most beautiful existing animals. This totem animal teaches you to appreciate the beauty of nature but also beauty in all forms, such as art, literature, music, and other creative expressions.

Swan as Your Totem Animal

If the swan is your spirit animal, that indicates being adaptable and accepting the changes that are happening around you and the changes happening within you. You never panic about the circumstances you are in and try to adapt to them as quickly as you can.

You are monogamous, devoted and loyal, and appreciate the love you receive from your partner. You often form strong romantic bonds which last a life time. You are faithful and supportive of your partner.

You tend to nurture your relationships and you have a caring and giving person. You are a devoted and caring parent and you would do anything to protect your children.

You are very organized and successfully manage your private life with your profession. You don’t let other areas of your life jeopardize your uniqueness and individuality.

With this totem animal, you are most likely very beautiful and graceful. You attract attention of others with your style and elegance in all occasions.

If the swan is your totem animal you might have the power to see the future and accept what is coming with joy.

What if the Swan Appears in Your Life?

If a swan appears in your life, it could be a message to begin using your intuition and gut feelings to decide on the actions you need to take in some situations.

This animal might be reminding you to begin paying more attention to your romantic partner.

The swan appearing in your life can help you change your ways of thinking and your behavior. It helps you relax and go with the flow in life.

When to call on Swan?

You should call on swan as your spirit animal when:

Dreams about Swan – Interpretation and Meaning

Swans in dream are usually a good symbol. They are a sign of beauty, life, prosperity and wellbeing. They also symbolize good luck and dignity. They announce happy events like marriages and engagements.

Swans symbolize happy moments spent in the company of your loved ones.

A dream in which you were feeding a swan, symbolizes happiness in love. If a swan had attacked you in a dream, that could indicate being upset over something.

A group of swans on the water is a very good sign, symbolizing abundance and prosperity. Swan eggs in your dream are also a sign of prosperity.

A dead swan in a dream is a bad sign, indicating discontentment.

Luna Moth - Meaning and Symbolism
Signs From a Loved One In Heaven
Archangel Uriel - Signs, Color
Mount of Jupiter Palmistry - Reading and Meaning