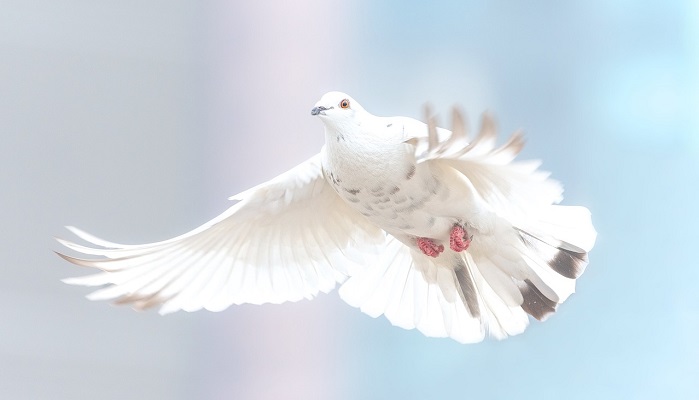 Doves and pigeons have many similarities, but doves are slightly smaller than pigeons.

They are special birds, able to find their way home even at great distances.

It has not yet been determined how exactly they manage to do that, but it is considered that several abilities they possess enable them to do that, such as having an internal compass, sound wave environmental mapping, etc.

That was the reason for their use as messengers since ancient times.

They have been trained for that job back as 3,000 years ago. They can fly at very high altitudes, and they can fly very fast.

These beautiful birds mate for life. Both males and females produce milk to feed their young.

White doves symbolize many things. They are a symbol of peace, love, and messages. They are symbols used in many religions, such as Christianity, Judaism and many pagan beliefs.

In ancient Mesopotamia, doves were considered as symbols of the goddess Ishtar, which was a goddess of sexuality, love, and war. In the Epic of Gilgamesh, the dove is the bird which the character Utnapishtim uses to find land.

In the biblical story of Noah, the dove was also the bird Noah released after the flood to find solid land. The dove returned carrying a fresh olive leaf, which was the sign that the flood water had receded.

In the Talmud, the spirit of God is compared to a dove which hovers over the water surface. Doves are often considered as symbols of human souls. 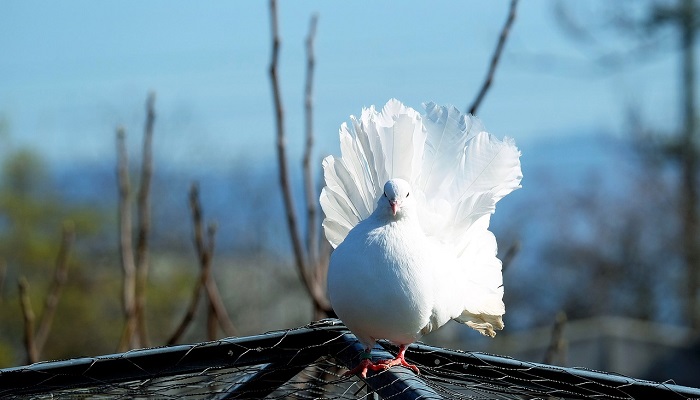 The dove is also a symbol of the Israeli people.

The dove is also depicted in the New Testament in the story of the baptism of Jesus. Namely, after Jesus was baptized, the heavens opened and the spirit of God descended upon him in the form of a dove. The voice from heaven then said: ”You are my Son, whom I love; with you I am well pleased.” Luke 3:22

The symbolism of a dove and an olive branch originates from early Christianity. It was used to depict the act of baptism. The symbol of the olive branch is derived from the Greeks.

In the early Christian art, the dove was a symbol of the peace of the soul, but later it began its use as a symbol of civil peace.

White doves are often related to the concepts of pacifism and peace. They are used in political marketing.

Also, pacifists use it frequently. Often people who are pacifists are referred to as doves. The white dove is a symbol of the peace movement.

Having in mind the symbolism of the white dove, the conclusion is that the dove is a fortunate dream symbol as well. When you dream about doves you can expect some good news coming in soon.

The dove or doves in your dream indicate a fortunate period in your life, filled with comfort, satisfaction, calmness and health.

Because doves are partnered for life, dreaming about a lonely dove could indicate some issues and disappointments in your love life, you will fortunately easily overcome. Two doves in a dream is a very good sign, indicating happiness and satisfaction in your love life.

It could also be an announcement of marriage, and sometimes it indicates a satisfying home life.

A dove bringing you a message in a dream could be a sign of some small obstacles you could soon encounter.

If you saw a lot of coupled doves, that dream possibly emphasizes the importance of nurturing your emotional relationships. It is asking you to pay attention to the efforts you are putting in maintaining your relationships and change something if needed.

Seeing many doves in a dream also indicates having honest and trustworthy friends.

If you dreamed of sick of an unhappy dove, maybe your dream indicates having some fake friends you should remove from your life. If you saw a dove flying, that could indicate meeting some new friends.

Catching a dove could indicate the beginning of a new romantic relationship or getting married, if you already are in a committed relationship. It could also be a sign of meeting some new friends.

If the dove was peaceful and resting, that dream is a sign of happiness and wellbeing in your home. If the dove was crying, that is not a good dream omen, and usually indicates misfortune, sorrow, problems, and sometimes the demise of someone you love.

An injured dove is also a bad sign, often indicating the death of a friend. A dead dove in a dream is also a warning about a potential loss of a close friend. Sometimes that dream indicates some wrongdoings you might commit.

Eating a dove in a dream is also a bad sign, usually indicating sadness, problems and bad fortune.

Seeing a dove standing on the roof could be a sign of some good news. A dove flying away from you is not a good sign, and could indicate losing money somehow.

If you held a dove in your hand and then released it, that dream could be a sign of happiness in marriage.

Seeing White Doves Flying in Front of You

The white dove is a beautiful bird with an even more beautiful symbolism. Its appearance in your life has a very good meaning, and announces good things awaiting you.

This bird could be a sign of encouragement and support from your guardian angels or your dear departed one.

White doves are also a sign of love and relationships, so you can expect some improvements in that area as well.

Having all this in mind, the conclusion is that a white dove in front of you is indeed a very fortunate symbol. Expect some wonderful ahead of you.