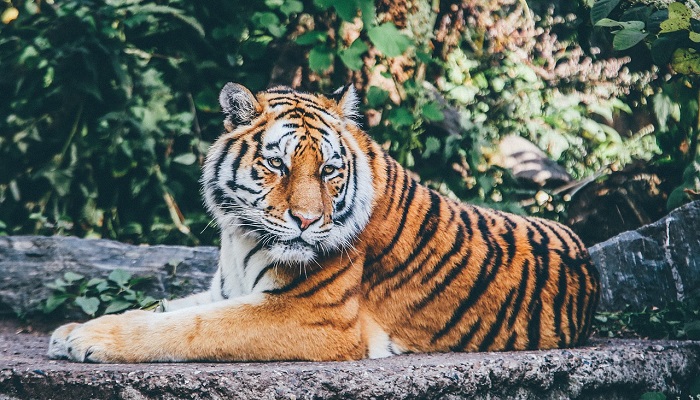 The tiger is a fearsome predator, usually preying on dear and cattle. Tigers are very territorial animals and require large territories to satisfy their needs, in the first place for prey.

They are solitary animals and could rarely be seen, especially nowadays when they are on the verge of extinction. During the past 100 years, the tiger population has decreased 93% of its historic range.

The animal is now eradicated from Central and Western Asia, the islands Bali and Java, as well as from large areas of East, Southeast and South Asia. They are considered highly endangered species. The main reasons are loss and fragmentation of habitat as well as poaching.

The estimated number of tigers in the wild is between 3.000 and 4.000 individuals, comparing from the around 100.000 at the beginning of the last century. From this number, about 2.000 tigers live in India.

According to the scientific studies, all tigers had a common ancestor. The earliest fossils of tigers found in Java are around 1.8 million years old.

The tiger’s body is muscular. It has a large head and a long tail. Its fur is dense, usually in shades of orange with black vertical stripes. Each individual has unique stripes on its fur. The tigers’ teeth are the longest of all existing cats. Male tigers are larger and heavier than females.

The Bengal tigers can sometimes be white in color with blue eyes. That occurs once in 10.000 natural births. That characteristic is not albinism but a mutation. White tigers are often bred in captivity. These tigers don’t live as long as the orange ones.

Tigers are found in different habitat types. Their main requirements are being close to water and prey and having enough vegetation to be able to camouflage and stalk its prey. They also need space for their shelters (dens) usually caves, dense vegetation or hollow trees.

In some parts the tigers inhabit open grasslands and savannas, as well as rocky terrain and taiga forests.

These animals are mostly solitary. They need large territories where they could satisfy their needs. If tigers share the same area they are mutually aware of their presence. Tigresses usually have territories of around 20km2, while male tigers usually cover 60 to 100km2. Males often overlap their territory with several females which serve as potential partners. 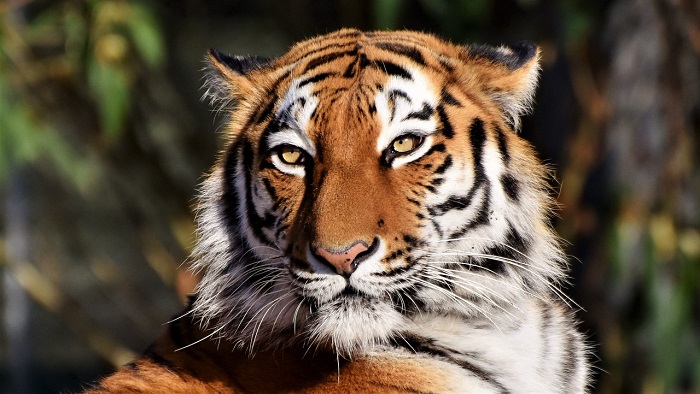 They can cross distances up to 650km to reach tigers in other areas.

Tigers are excellent swimmers and enjoy swimming in ponds, lakes and rivers which keeps them cooled during the heat. They can swim up to 29km in one day. They are also able to carry prey through water or even capture it there.

Female tigers form their first territories close to their mothers, and the territory often overlaps. Males are different and they tend to go further and form their own area. The males often live as transients in other males’ areas and wait until they are old and strong enough to fight for their territory with the resident males. They are often killed in such fights.

Tigers have complex relationships within the species. They sometimes share their prey with other tigers which are not related to them. Males allow the cubs and the females to feed on the kill before while he is feeding.

Males in some rare cases participate in raising the cubs. Tigers defend their territory mostly by intimidation and rarely by aggression. That is usually done by facial expressions such as baring their teeth, enlarging the pupils and flattening the ears. Fights usually occur between male tigers fighting for the right to mate.

Tigers roar usually during hunt when they kill the prey and during the mating season. Tigers also moan, usually when they are tense. They also produce sounds such as grunting, meowing, hissing and growling.

Tigers are skilled predators. They hunt mostly medium sized to large animals, which vary depending on the country.

Tigers can sometimes satisfy themselves with smaller prey, such as hares, monkeys, fish, porcupines, etc. Although it’s not common, tigers are known to attack elephants and rhinoceros, cattle, donkeys and horses. Weak or old tigers sometimes prey on humans.

These animals mainly hunt at night, but there are records of daily hunt. Tigers usually hunt alone, ambushing the prey, and grabbing it by the neck. They tend to abandon the hunt if they sense that the prey has sensed them. Only 2 out of 20 tiger hunts are successful. Tigers sometimes hide their prey for later.

These animals are able to endure two weeks without food. They usually hunt their prey but if there’s an opportunity they don’t hesitate to eat carrion or steal food from other animals. They can sometimes kill their rivals fighting for a prey.

Pregnancy lasts around 3 to 4 months, usually 3.5. They usually give birth to 1-3 cubs.

Females raise their offspring alone and the fathers usually don’t participate in the process. Wandering tigers often kill pups which are not related to them.

Tigers are highly endangered species, mostly because of loss of habitat and poaching for their body parts and fur. Parts of the tiger’s body are used in Chinese traditional medicine but now their use is banned by law and the trade of tiger parts is illegal. Still there is an existing black market based in China.

There are also numbers of tiger farms, breeding these cats for profit with around 5000 to 10000 captive animals.

What does a Tiger Symbolize?

Tigers have fascinated people since antiquity. They are one of the signs of the Chinese zodiac. The Chinese use it as a symbol of earth, and in combination with the dragon, they represent the spirit and matter.

It often symbolizes war and anger, mainly in Asian culture.

The Meanings of Tiger as a Spirit Animal

The tiger totem can have many different meanings. Here are some of them:

Personal strength. The tiger is one of the strongest animals on this planet. When the tiger is your totem animal it reminds you of your personal strength and ability to endure and overcome any difficulty you encounter.

Vitality. These animals are very vital and strong. You are most likely a healthy and very vital person if you have the tiger as your totem animal. This totem animal gives you the ability to endure many difficulties with ease.

Sensuality. The tiger totem animal is giving you the gift of strong sexual drive and sensuality. You are most likely a very attractive person and enjoy openly expressing your sexuality. In some cases, you might be a person who is intimidated of your sexuality and the tiger totem animal encourages you to open yourself and release the sexual tension that has been building up inside you. Sometimes you can be a person with uncontrollable sexual appetite.

Unpredictability. The tiger totem animal symbolizes sudden and unpredictable events or situations. The tiger teaches you of the need to accept these circumstances and deal with them although they might be creating some obstacles to your plans. With this totem animal you might also be very unpredictable or have changeable emotions.

Patience. The tiger is a master of patience. It waits patiently until the right moment comes to strike at its prey. This spirit animal is teaching you the gift of patience and not rushing into things and decisions, to attain your goals. With the tiger as your spirit animal you are most likely a very patient and thoughtful person.

Determination and persistence. The tiger teaches you the gift of persistence and determination if you want to achieve your goals. You most likely have these traits if the tiger is your totem.

Tiger as Your Totem Animal

If the tiger is your totem animal you are most likely a fierce person with a strong will. The tiger as your spirit animal is teaching you of the gift of being patient and knowing the right moment to react to get what you desire. The tiger is asking you to stop procrastinating and wasting your time. It reminds you when the time for action is.

The tiger totem is giving you the strength to deal with major obstacles and challenges you face in life.

With the tiger as your totem animal you are most likely a very adventurous person and always seeking for new experiences. When you desire something, there’s nothing that can stop you from acquiring it. Sometimes you might be described as selfish and self-absorbed.

You have a strong sexual drive and energy and your relationships with others are intense, especially your romantic relationships.

With the tiger as your totem animal, you need time alone. You enjoy your freedom and independence.

You also have a sharp eye for details and nothing can pass by you easily.

What if the Tiger Appears in Your Life?

The tiger often appears in your life to remind you of your true power and abilities. It is a strong reminder that you can achieve anything you desire and overcome any obstacle you encounter. It also indicates successfully overcoming obstacles and challenges.

Sometimes the tiger’s appearance in your life could indicate the need to face some danger or to face and confront someone who represents some kind of threat.

A tiger appearing in your life also indicates dealing with your emotions and overcoming fears. You might feel threatened by your own feelings and you need to get over them. The tiger is asking you to gain strength and courage and face your fears.

When the tiger totem animal appears in your life it might be pointing out to something threatening or dangerous in your life you are not aware of. Be careful and try to prevent some potentially bad things from happening.

This animal is a reminder that you need to be patient if you want to achieve your goals and desires.

It also indicates the need to plan your actions to get the required results.

When to call on Tiger?

You should call on Tiger as your spirit animal when:

Dreams about Tiger – Interpretation and Meaning

The tiger in your dream could symbolize your power and strength of your will. This dream could be an encouragement to face your fears and confront them. It is a boost to your confidence and self-esteem.

This dream is a reminder of your ability to overcome obstacles you encounter. It could also describe your fireless personality.

If the tiger was chasing you, that dream could indicate your attempts to run away from your feelings or desires. Those might be sexual desires or feelings of anger.

A dream about a tiger could also reveal feelings of anger and aggressiveness towards someone. If the tiger was attacking you, that dream maybe indicates something in your life you are trying to avoid or is too overwhelming.

If you killed a tiger in a dream, that is a very good dream sign, and usually indicates getting rid of some bad habits and attitudes.