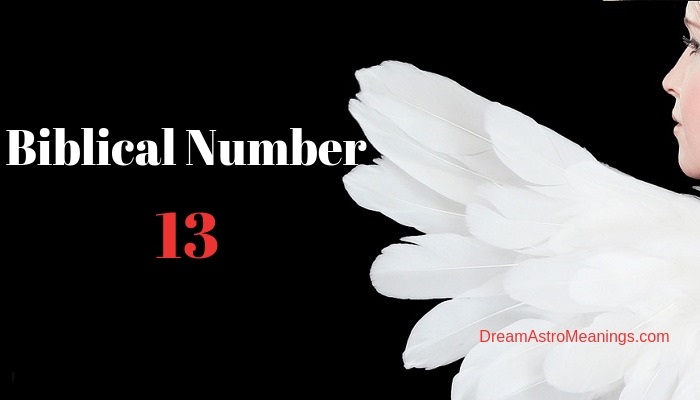 The thirteen has a different meaning depending on different cultures and traditions. Sometimes distortions that have nothing to do with reality are popularly produced.

In Hebrew the number that expresses the unit is the one, which is called echad and the letters that comprise it: alef (1), jet (8) and dalet (4), add thirteen.

In today’s text, we will learn more about this number and what it actually means in the Bible itself and in general.

What Does 13 Mean in the Bible?

The thirteen has a different meaning depending on different cultures and traditions. Sometimes distortions that have nothing to do with reality are popularly produced. In Hebrew the number that expresses the unit is the one, which is called echad and the letters that comprise it: alef (1), jet (8) and dalet (4), add thirteen.

The alef refers to One who is the Creator the jet to the seven heavens and the earth, and the dalet to the four cardinal points; in such a way it alludes to the totality of the existing, configured in the One that is composed of thirteen, and that has its expression when it says: “Shema Yisrael, A-do-nai E-lo-heinu, A-do- Nai Ejad. ”

In psychology the irrational fear of number thirteen is called Triskaidekaphobia and it is claimed that historical figures like Napoleon, the millionaire J. Paul Getty and the president of the United States Franklin D. Roosevelt were afraid of this number. For example, Roosevelt never attended dinners with 13 guests or traveled on the 13th. Consistent with his Triskaidekaphobia, Roosevelt made his final trip on April 12, 1945.

It is surprising that a number, a figure that the West considers negative, is so positive for Jews. It may not be the only background divergence. For the Romans the observance of the Sabbath showed how unattached the Hebrews were to work, and in that as in so many things they only saw the outside.

Since the numbers are never too far from the letters in Jewish culture, the system of equivalences called gem atria is there to speed up the mind and sharpen the senses, which makes the sons of Jacob a people in love with music and studies. .

Several times that number is mentioned in the Talmud, the Midrash and other sources, and of course there is nothing that relates it to bad luck; therefore avoiding it in any way is an absurdity. Judaism does not admit the notion of bad luck numbers; there are significant numbers, but luck does not mix with them.

The attributes of God’s mercy, which are the divine manifestations expressed in the human context, are thirteen; the basic methods to explain the Torah are also thirteen. Every Jewish author agrees that these two verses contain a list of 13 attributes of God and His mercy, listed briefly in the table on the left.

Before starting this study, I did not know that number 13 has great significance in Jewish thought. In Western countries, 13 are often related to bad luck. In fact, many multi-story buildings do not have a 13th floor due to superstitions. Before talking about the number 13, you need to understand that each letter in the Hebrew alphabet, which is made up of 22 consonants, has a numerical equivalent.

“Gem atria” is the Jewish discipline dedicated to finding deeper meaning or hidden in the Scriptures based on the numerical value of their words. That produces very interesting results. One of the most common examples is the Hebrew word for jai (חי), or “life,” which has a numerical value of 18; reading from right to left, the letter ח = 8 and the letter י = 10. Since this word is so important, many monetary Jewish donations come in multiples of 18.

It is important to note that the number 13 does not represent bad luck in the Jewish tradition or numerology. We cry out for the mercy of God when reciting the Thirteen Attributes of Mercy, according to Exodus 34: 6-7. Ram bam the Jewish philosopher of the 12th century, also known as Moses Maimonides, summed up the basic beliefs of Judaism in a list of Thirteen Principles.

Jesus referring to the Shema (“Hear, O Israel, the Lord our God, the Lord is one”) was the central belief of Judaism that there is only one God. The numerical value of echad (one) and ahava (love) is 13 each. Together, they add up to 26. Now, for the following: the letters YHVH, the name of God, have a numerical value of 26! God is love and is One, and his name is YHVH.

But there are also quite areas where the 13 is not associated with bad luck. There are thirteen Buddha’s in the Indian pantheon. In Mexico, already during the high culture of the Maya, the 13 was worshiped as a sacred number, they know there 13 snake gods. In numerology we know their meaning in connection with change, liberation and transformation. In the Tarot she is given the card “Death”.

On the 13th day after fertilization, the embryo forms the umbilical cord and thus anchors itself for the first time in this incarnation. With the formation of the umbilical cord we have connected to the blood circulation of our mother. Our birth mother is the earthly representative of Mother Earth. After the connection to the blood circulation of the mother pass usually still 20 times 13 days until the actual birth.

Thus, the picture of the thirteen of the day offers us that energy, as we ourselves choose the “umbilical cord of life,” and we are aware that there is still time left until the birth of life from itself, twenty times another thirteen.

In the lunar calendar the year is thirteen months and in the last month is when the death of the Sun occurred coinciding with the winter solstice. When patriarchy replaced matriarchy, the thirteen step to be considered a diabolical and feared number. The bad reputation of the thirteen has caused that at present it is the number that nobody wants to have or take his place.

In many hotels there is no 13th floor or room number 13. When we travel by plane, train or bus, seat 13 usually shines by its absence. In this, as in everything, there is always the exception that confirms the rule. I do not know anyone who has waived his 13th payment for fear of bad luck and misfortune.

The time to find the etymological origin of the word thirteen we have to go back to Latin because in that language we find that, more exactly in the term tredĕcim. The thirteen (word that is represented in numbers through the union of 1 and 3) is the figure belonging to the group of natural numbers that happens to twelve (12) and is before the fourteen (14).

Thirteen is also recognized as the prime number that occurs after eleven (11) and appears before seventeen (17).

For example, Formula 1 does not use thirteen (as in airplanes). The same with some football teams. There are also streets that omit portal 13 and hotels that avoid using the 13th floor so as not to bother their eventual guests. In Madrid, on the other hand, there is no bus line 13. It should be noted that in Latin America and Spain, Tuesday 13 is considered bad omen, as it happens in the Anglo-Saxon nations with Friday the 13th.

Such is the negativity that holds this last date that precisely has given name to one of the most important sagas of terror of all time: Friday the 13th. In the decade of the 80 was when the first of the films of the twelve that appeared formed the group. The origin of the story that narrates is the accidental death in 1957 of a boy named Jason in the lake of a camp called Crystal Lake.

A victim is that from then until today does not seem to rest in peace because all those who are in that place will die little by little in strange and wild circumstances that make a black legend begin to circulate around that enclave.

In the tarot, the number 13 is interpreted as death and in its hidden sense it represents change (the death of something and the birth of something else).

Finally, it must be said that the thirteen is the preferred value of the witches and the one that prevails, then, in the covens (the place where witches celebrate their meetings and rituals). As with witches, it is necessary to emphasize the fact that the number 13 is not always seen with negativity. Thus, for example, this figure is linked to Freya, a Germanic goddess who identifies with love.

The first number with two figures of the sequence Fobonnaci is precisely the number 13 and the next in that sequence, it is already number 21.

As you can see, there are not many numbers with which Mother Nature works, for this reason the 13 has captivated all those who wanted to play to be gods.

Anyway, if we go back to the initial moments of the history of the human being, the thirteen was neither malignant nor negative. The 13th at the time of the matriarchy was considered a sacred number that was intimately related to the lunar calendar that was used at that time matriarchal.

There are certain groups that do not seem to be afraid of the bad luck of 13. An example of this is found in the highest symbol that shows the sovereignty of the United States of America: “The great seal” present on all dollar bills.

The number 13 stands out from the order and normal rhythms of the universe. From the cosmic point of view the 13 does not harmonize with the universal laws. The 13th agitates the order of the macrocosm and disturbs it by disturbing its rest and balance.