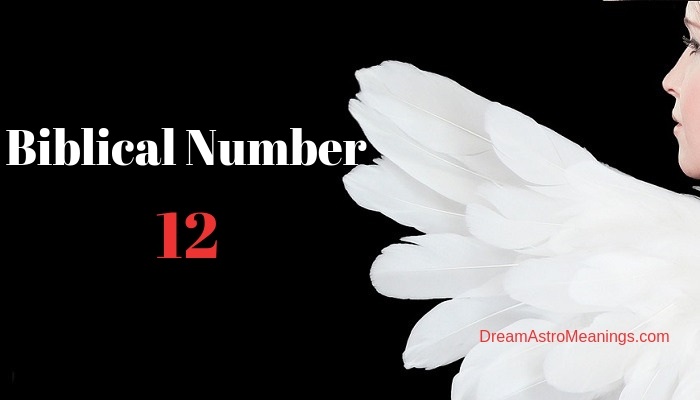 In this meaning there is no room for confusion: what the number says is what the author wanted to say.

What Does 12 Mean in the Bible?

A symbolic number is one that does not indicate a quantity, but expresses an idea, a message different from it, that surpasses it and overflows it. It is not always possible to know why such a number means “such” thing. The association between both realities is sometimes unknown.

For us Westerners, this is difficult to understand, but the Semites used them naturally to transmit ideas, messages or clues.

The Bible never explains what each number symbolizes, but scholars have come to discover some of its symbolisms and have been able to clarify many biblical episodes. The number 1 symbolizes God, who is unique.

The number 2 represents man, because in him there is always duality, internal division because of sin. Mt 20.30 Mt 26.60 The number 3 represents “totality”, perhaps because 3 are the dimensions of time: past, present and future. Saying 3 is equivalent to saying “the whole” or “always”. Gn 6.10 Mt 26.34 Is 6.3

The number 4 in the Bible symbolizes the cosmos, the world, since they are 4 cardinal points. When it is said that in Paradise there were 4 rivers (Gen. 4.10) it means that the whole cosmos was a Paradise before the sin of Adam and Eve. That is, it is not a specific site, although some continue to search where it was. Ez 37.9 Apoc 4.6

The number 7 has the best known symbolism of all. It represents perfection. That is why Jesus will tell Peter that he must forgive his brother up to 70 times. 7. He can also express the perfection of evil, or the extreme evil, as when Jesus teaches that if an unclean spirit comes out of a man he can return with 7 other evil spirits. , or when the gospel tells that the Lord expelled 7 demons from the Magdalene.

The Apocalypse is the one that uses it the most: 54 times to symbolically describe the divine realities: the 7 Church of Asia, the 7 spirits of the throne of God, the 7 trumpets, the 7 candlesticks, the 7 horns, etc.

The Christian tradition continued this symbolism of the 7, and for that reason it fixed in 7 the sacraments, the gifts of the Holy Spirit, the virtues. The number 10 has a value that serves to remember. Since the fingers are 10, it is easy to remember this figure. That is why they listed as 10 the commandments that Yahweh gave to Moses (they could have been more), and 10 the plagues that struck Egypt.

Also for this reason only 10 ancestors are placed between Adam and Noah, and 10 between Noah and Abraham, even though we know that there were many more.

The number 12 is also symbolic. It means “choice”. That is why we will speak about the 12 tribes of Israel, when in fact the Old Testament mentions more than 12; but with this it is meant that they were “chosen” tribes. Likewise, the minor prophets of the Old Testament will be grouped in 12. The Gospel will also mention 12 apostles of Jesus, who turn out to be more than 12 if we compare their names; but they are called “The Twelve” because they are the elect of the Lord.

Jesus also claims to have 12 legions of angels at his disposal (Mt 26,53). The Apocalypse will speak of 12 stars that crown the Woman, 12 doors of Jerusalem, 12 angels, 12 fruits of the tree of life.

The number 40 also has symbolic value. It represents the “change”, from one period to another, the years of a generation. That is why the flood lasts 40 days and 40 nights (it is the change towards a new humanity). The Israelites are 40 years in the desert (until the unfaithful generation changes to a new one).

Moses remains 40 days on Mount Sinai, and Elijah goes for another 40 days there (from which time their lives will change). Jesus will fast 40 days (because it is the change from his private life to his public life).

There are other symbolic numbers like 70. St. Luke says that Jesus chose 70 disciples to send them to all the places and places where he had to pass (Lk 10,1). It is not giving a real figure, but symbolic, since according to Gen 10, the total of the peoples and nations that existed in the world was 70. When Luke says this, what he meant is that he sent them so that the gospel could reach all the nations of the world.

We also see another figure in Jn 21,11 Why so much interest in registering the number of 153 fish? Is that in ancient times it was believed, among fishermen, that 153 was the number of fish that existed in the seas. The message is clear: Jesus came to save people from all nations, races and peoples of the world.

This number 12 says a lot about taking the other point of view, and in the result (1 + 2 = 3) is the group and community topic par excellence.

But back to the 12th Around Jesus were 12 disciples who gave him support in his work. Each of these disciples reflected another sign of the zodiac, that is, another number (between 0 and 9) that numerically reflects the type. He could see from the outside how and which of his companions reacted with the topic.

It was only the mirror that he had to observe, thus enabling him to recognize topics and thus to call for change. – Say miracles work.

The best known of these numbers is the famous 666 in Revelation 13,18. The same book clarifies that it is the figure of a man.

And again it drives me back to the number 12 in numerology. The number twelve appears to me so densely sown in the Bible as no other.

The 12 tribes of Israel, Jesus had 12 disciples, the 12 zodiac signs and the 12 months. The trees of life that bear fruits 12 times a year.

To put it simply, it is 12 that take a different view and 3 in the group, the community. Man is a material and polar being. But he is just beside the physical and spiritual nature. A rejection or negation of the corporeal, the material and the turning to the purely spiritual causes him to be confronted with problems only more and more violently.

We are not here on earth to escape from the earthly through meditation and strive for enlightenment. We are only here to experience the material, that is, the polar. A circumstance that I can well associate with these practices, but only if it serves the life of the Lord and not the flight.

Not all the numbers in the Bible are symbolic, before each figure we have to ask ourselves: does this figure indicate quantity or enclose a message? In the Hebrew and Greek languages ​​the letters have a numerical value. So the 1 would be the A, the 2 the B, etc.

The number obtained with the letter combination is called a gemátrico. In each figure he could have hidden a word. The Bible brings several examples of these geomancy numbers.

For example: When the Israelites came out of Egypt they say that 603,550 men came out, not counting women and children, but if we replaced the letters of the phrase “all the children of Israel” (in Hebrew: rs kl bny ysr’l) by their corresponding Numerical values ​​gives precisely 603,550, so what they are saying is that “all the children of Israel” came out. Mt 1,17 divides the ancestors of Jesus into three series of 14 generations each. But this is impossible. Matthew only puts three names to cover the 430 years of slavery in Egypt.

What happened was that they took the name of David (D = 4 + V = 6 + D = 4 = 14) And since the Messiah was expected to be a descendant of David, the evangelist meant that Jesus is the “triple David”, the total Messiah, true descendant of David.

Jesus taught us that as a spiritual teacher and a mentor. He has shown us that we should work on earth and not seek the higher. We are automatically perfect as part of divinity. So why strive for it.

Let’s accept this gift of the earthly and allow ourselves to live, to enjoy and to experience things. Let’s take the time to let off steam when we have already created the time.

Once again it is said: “Take the other point of view and work in the community of those who want to experience here”. By the way! 29.9.1999 was the date that allowed us the highest number. Added up, this results in the 48. This in turn gives the 12 and then the 3.

Since that date, it is possible for all people here on Earth to recognize and practice the opposite view. It is also the first time that this high number 48 has been reached. – So there are no more excuses. Think of the hanging in the tarot. – Turn around and take the other point of view. – It’s going to be exciting!