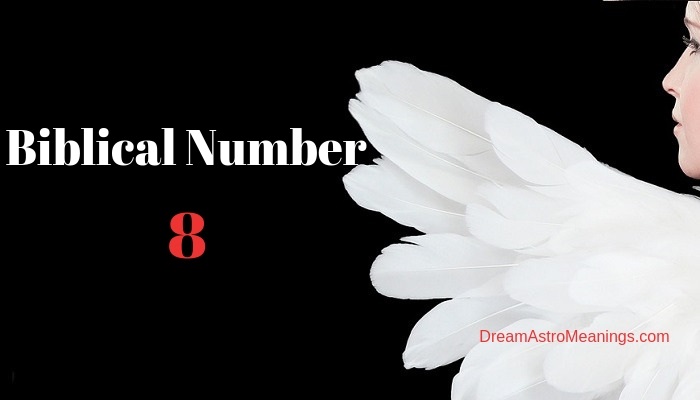 This number is mentioned 80 times in the Bible. In Hebrew it is ‘Sh’moneh’ from the root ‘Shah’meyn’ to put on weight, cover with fatness, overflow. As a participle it means “he who is rich in vigor.” As a noun it indicates “superabundant fertility”, “oil”, etc. And as a numeral it is the superabundant number.

As the seven was so named because of the fact that the seventh day is that of the conclusion or rest; the eight, like the eighth day, was above this perfect number, and was the first of a new period. It represents two numbers in one, the first and the eighth.

As regards the first period, it represents the “resurrection”, because the old order of things ended, a new number emerges then to typify the life out of death.

What Does 8 Mean in the Bible?

Besides that, as far as the quality of that resurrected life is concerned, 8 = 7 + 1, it speaks of something more than the perfect. If we observe the second period after seven, then the number eight expresses what is new, in contrast to the old that was now eliminated, indicating that the previous series was completed.

It is the seal of the new pact, of the new creation, characterizing them in that way. In short, the number eight is the number especially associated with “resurrection” and “regeneration,” and with the beginning of a new era or order.

Christ rose from the dead “the first day of the week,” which was necessarily the eighth day. It is remarkable that the Bible contains the record of eight other individual resurrections in addition to those of the Lord and the saints. When the earth was covered by the flood, Noah was the ‘eighth person’ (2 Pd.2: 5) who stepped on the earth in order to start a new order of things. “Eight people” (1 Pd.3: 20), including him, passed into the new regenerated world. Those eight souls were saved and resurrected in the ark that is a type of Christ.

The feast of Tabernacles lasted eight days (Lev.23: 36). The party itself lasted seven days, but at seven it was added an eighth; and by the Levitical law that day was always observed as a day of rest (Lev.23: 39).

This celebration is a kind of joy and rest of the millennium, when Christ reigns over the whole earth. It was on the last day of the feast of Tabernacles that Jesus rose up exclaiming: “If anyone is thirsty, come to me and drink” (Jn.7: 37). This last day – the eighth – was, as a type, the great day, because in it they left the stores and returned to their homes.

In the same way, after the millennium, the temporal glory will be replaced by the entrance into the new heavens and the new earth; and the eternal day will begin-the great day-when the tabernacle of God will be with men, and God, in Christ, will be all in all.

It was probably with the idea of ​​the Feast of Tabernacles in mind that Peter suggested to the Lord on the Mount of Transfiguration to make three tents, for Jesus, Moses and Elijah. Moses and Elijah were not shown on the same plane as Jesus. Christ, the King, is incomparable and is undoubtedly above all.

This vision of the kingdom of God to Peter and his companions took place on the eighth (inclusive) day after the first announcement of the sufferings of Christ (Lk.9: 28). «After eight days» (Jn.20: 26) another disciple, Thomas, who still had doubts, was led to recognize the sovereignty of Jesus.

Also, the Eight holds in itself a lot of strength, tenacity and stamina and a great deal of creativity.

But it is also the influence of depression. If the three are light and airy, the eight is rather heavy and phlegmatic, with a penchant for the negative. Not that people with eight are unhappy people, of course not, but they tend to do so more easily.

The Eight contains a high degree of dry humor or sharp-tongued sarcasm. In love, the Eight is more conservative, it should all have its order – whereby, of course, the creativity inherent in people with an Eight makes love an adventure … An eternal pursuit of balance in the outer as well as in the inner life is a theme that accompanies people with an eight throughout their lives.

You are a logical thinker, for you a decision must be made coherent. Only to say “that’s how it is” is not enough. You want to know the stations that go through a decision. You have a business sense and are a good organizer. They have creative talent. Even if you do not use this predisposition, it still slumbers in your innermost, always ready to wake up.

You have a dry sense of humor that can quickly change to sarcasm if you feel too stressed. Sometimes you see life too black and you cannot convince yourself otherwise. The tendency to the negative is always present.

You have a lot of creative talent; it should almost overflow, if you do not let the problems of life suppress you too much. You are an outspoken logical thinker with a razor-sharp mind.

However, if you only classify your way of thinking as correct, then you can be very stressful for your fellow human beings.

If you do not use these strong qualities of the eight well for yourself, then you can totally withdraw from the world and surrender to the world’s pain.

The number 8 means the beginning. It symbolizes the transition between heaven and earth, and written horizontally, it represents infinity. It is considered as the number of justice and equity. For the Catholic Church it is the symbol of the resurrection, symbol of new life. The 8 speaks of the organization, perseverance and control of energy to produce material and spiritual achievements.

In Babylon, Egypt and Arabia, 8 was the number of the reduplication consecrated to the sun: 2 + 2 + 2: where the image of the solar disk adorned by an 8-arm cross comes from. The Pythagoreans called the number 8 the Great Tetrakis, was considered the sign of harmony, prudence, and reflection, represents stability, solidarity and balance. The 8 is the natural number that follows the 7 and precedes the nine.

The polygon of 8 sides is called octagon. The 8th is the sixth term of the Fibonacci succession, after 5 and before 13. The cube has 8 vertices. Octopus has 8 tentacles. The arachnids are animals with 8 legs. It’s a Leyland number since 22 + 22 = 8. The 8 is the atomic number of oxygen. In computer 8 bits form 1 byte.

The 8 represents with the two entwined snakes of the caduceus, symbol of the balance between antagonistic forces.

It also represents the eternal cosmic movement base of regeneration and infinity. If you place it horizontally, you will be able to represent the symbol of infinity. A chess board has dimensions of 8 × 8 squares, giving rise to its 64 squares. In the human body, 8 are the bones of the skull: Frontal, two Temporal, two Parietal, Ethmoid and Sphenoid.

The 8 is present in the Star of Solomon, and is a very important symbol in various cultures of the East. The atoms always seek to have 8 valence electrons; this is known as the Octet Rule.

In the musical scale the eighth note will be the same as the first, but it will vary in whether it is more severe or acute.

In the cosmogony mystic of the Middle Ages the 8 corresponded to the sky of the fixed stars (Firmamento) and symbolized the perfection of planetary influences -The movement of a planet through the zodiac over time, and therefore, its influence on each person depending on his zodiacal sign-

Scorpio is the eighth sign of the zodiac. Thanks to its perfect symmetry, the number 8 can be placed vertically or horizontally, but when reflected in a mirror, it will return to its original shape.

This symmetrical perfection leads him to be in perfect balance, which is the ideal situation, according to Chinese astrology.

According to numerology, the study of the hidden meaning of numbers and practice of divination assigning a number to each letter of the alphabet and a special meaning to each number, the 8 speaks of organization, perseverance and control of energy to produce material and spiritual achievements. It symbolizes self-sufficiency, success and firmness of approaches.