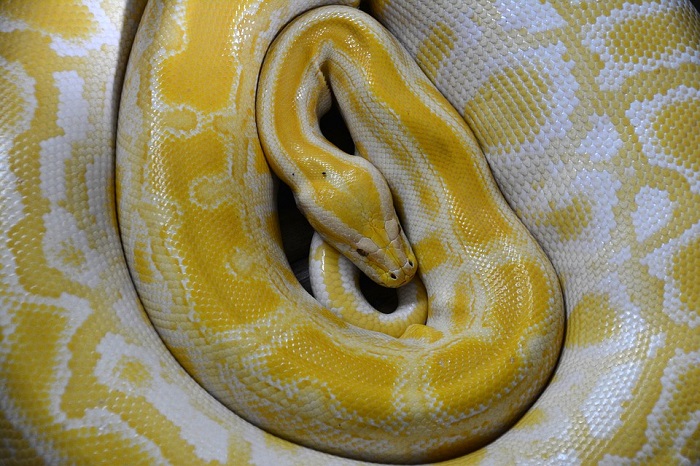 Most of us feel scared when we dream about snakes, even if the dream itself is not really scary – for example if you dream that you cuddle with the snake, etc.

Regardless of the feeling that you have in real life regarding snakes, these dreams have such a powerful meaning.

If you take a look at any psychologist, he will confirm that the dream world, especially about the animals and colors, can say a lot of your inner state.

Snakes are a common motive in a dream world, and they also can say a lot of your inner state, feelings, especially those that are suppressed and hidden from your conscious mind.

One of the variations of this dream is a version of a yellow snake.

Both and the animal and the color have their meaning and are important for the understanding of such a dream.

Did you have a dream of a yellow snake? What do you think such a dream means – is it connected to your goals or your sexual desire that you hid from yourself?

The meaning of what dreams of a yellow snake is most commonly connected to the deep inner understanding of something difficult because snakes, in general, are a symbol of the highest wisdom and also cunning.

The color in question – yellow, is important since this is the color that represents the expression of energy.

Of course, for a better understanding of a dream itself, we need to take a look at all circumstances of sleep.

For example, if the dream shows crawling into a house where you see the yellow snake, the interpretation suggests considering it as a signal of income and wealth.

In a case when a yellow snake is wrapping around your body, you must pay attention to your health. Or, if you are killed by a yellow snake, a dream meaning is connected with a quick solution to disputes and problems.

In the version of a dream where you see a lot of yellow snakes, a bunch of them, such a dream predicts life in constant fear, whether to fear of infection or loss of status quo.

Suppose you are bitten by a yellow snake, the enemies that you have been preparing to seriously harm you in the most cunning ways.

Such a dream informs you of the existence of a secret enemy and plan. He will not dare to open a battle but will try to play dirty tricks. Be prepared for it.

In a version of a dream, where you are attacked by the yellow snake (not bitten – there is no need to worry, there will come a time when you will be able to go on a long journey through unknown countries, to explore and to grow in the same time. It will be the best thing that happened to you.

The snake attack, in general, and this must be mentioned, also symbolizes the suffering of people from the inner circle – so you need to be extra careful in the next period.

In a version of a dream where you have caught a yellow snake, such a dream announced that you would be the subject of discussion and a lot of gossips. But, do not pay attention to these events; they mean nothing to you.

If the yellow snake in your dream is eating something, and you are looking at it, such a dream can be the symbol that in real life, you will be hurt by a loved one, perhaps not fully consciously. Or vice versa, you are scared that you will be the one that will hurt your loved ones, not intentionally.

As you could have seen, the dreams about Yellow snakes are more common than you think, and there are various versions of this dream motive.

There are other elements that can appear in this dream – for example, the yellow snake you see is on the Sun.

In such a case, a dream shows that you strongly support an immoral person who will surely harm you from time to time. You are, on some level, aware of this fact; stop ignoring it.

And the skin of the yellow snake – did you had a dream that it had lost its skin (this is a very common motive)? In this case, such a dream shows that soon you will meet a very wise person who will show you the right direction in life and even cure the disease that you have been struggling with for some time.

In some cases, you can understand this dream as the future fight that you are taking to protect your rights in the attempt to defend honor from the evil attacks of others.

In this case, if the yellow snake bites you and you lose a lot of blood – you are threatened by awkward rumors that are hurting your feelings a lot. You feel ashamed because of it, and you should not. These are just rumors.

One more version that makes a lot of difference – if the yellow snake is very young, tiny, or small – such a dream shows that you will be betrayed by people you trust the most.

In any case, sleeping with the yellow snake, or the version where the snake lays with you can show that now is the time to grow in life, to find wisdom and healing.

Bites from this snake can show a serious, extremely painful conflict with the person you love the most, with the pronounced feeling of a powerless, hopeless situation.

Playing joyfully with this snake can show a romantic relationship and passion, but if you know that the snake is very venomous, in that case, an unpleasant incident maybe, even a temptation or evil.

When you are playing with the yellow snake, that is clearly not dangerous – you are naive, and you do not see a threat from a strong and cunning person. Holding and touching the yellow snake shows the heroism that you have and a skillful strategy that you are about to implement in life to progress.

In any case, when the yellow snake shows all friendly to you, in a dream, then such a dream symbolizes a huge energy potential that you do not use. Try to act more decisively, and you will be able to use all of that energy for good causes; you will be able to move far than you have started, only if you dare to try. If you are scared, you block such energy.

Another common version of a dream about the yellow snake is the one where the snakes are in the forest, hidden among the trees – such a dream symbolizes the emergence of inner doubts in real life that you have trouble dealing with. These can be problems in your sex life and a simple quarrel with a loved one – we will tackle this matter later, keeping in mind that the snake is often associated with the sex life of a person.

So, as you could have seen, snakes, in general, are in dreams the symbolism of different types of energies.

Following this lead, the snake that is yellow is seen as a reflection of a strong but, of course, dark energy. It could suggest that you will actually be able to subdue the unfriendly energy for you.

At the moment, you are only thinking, but you are not yet taking decisive action. Fighting it in a dream literally means driving to control the situation.

A dream interpretation assumes that you cannot distinguish an enemy from a true friend. It would actually force her to give up something important and significant.

Dream interpretations explain certain dreams about snakes in different ways, it is difficult to choose your own answer, but it is quite possible if you take into account all the little things.

Each of the dreams carries its own symbolism, depending on all elements in the dream, so if you had such a dream try to recall as many details as possible.

But depending on the number of snakes, their size, skin color, and other shades, you understand the dream in different ways. Did it happen to you to see yellow snakes in a dream world, often, maybe? Maybe every night, as you can recall?

The dream about the snake is a signal of a real encounter with evil in any form, and it does not have to be open evil, known evil; it is more likely that it is hidden.

The advice is to be careful but not scared – understanding such dreams, believe that you are in surroundings with seemingly hospitable people who will gossip about you in all possible ways behind your back. You will not notice their true intention until it becomes an open evil.

In some cases, such a dream about yellow snakes symbolizes confusion, uncertainty, and doubt, especially when choosing people, they can rely on (you believe that you can rely on them).

In order to achieve your goal, you will not consider the interests of others. But at the same time skillfully deal with enemies – this may be the advice on how to deal with such enemies and uncomfortable situations.

The yellow snake in the dream warns that you will face a manifestation of human anger or envy, most likely hidden rather than open.

At that moment, you will actually be able to identify the hidden enemy and deal with it with completely legal methods.

It is the signal of a real encounter with evil in any form, small, hidden, open, and big; it all depends on the other elements in a dream.

Dreams about yellow snakes alert a person to the presence of unpleasant events in his or her life. In addition, it is also quite possible that there will be a conflict or a sudden illness.

In any case, such a dream is an encounter with the enemy, warns that the battle in life will be fierce and may end not in your favor, and a non-venomous reptile can promise you victory.

In some cases, it is the indication that you trust your loved one in vain, who is just pretending to be faithful and loving.

Only the strength of mind will force others to reckon with your opinion, and the subconscious fear for your health and such signs cannot be ignored.

Advice is to deal with a lot of envy that is around you – you may not be too good at understanding people, and you should reconsider your circle of friends.

One more thing – we must not forget that the dream about snakes can sometimes mean dissatisfaction with sex life. As it is said, the dreams about snakes speak of sex life, desires and can have that erotical connotation.

At times it could show your desire to embark on love attempts to increase the enjoyment of intimate life.

It is possible that you have created a large number of enemies among the people with too much arrogance and that secretly you want to be with them, at least in a physical way.

Some say that snakes, and in particular yellow snakes, in dreams, do not represent loved ones, rather people that you work with. They do not have to be close to you, in an emotional sense, but they are physically close to you. You see them every day.

Because of such close but distant relation, you are not sure what they are saying to you, are honest, and do they envy you in some way.

Snakes are always a problem not only with colleagues but also with household members, another interpretations state.

The advice in both cases is this: kindness and attention must be shown – appreciate this very much. If you manage to change your character, things will get better.