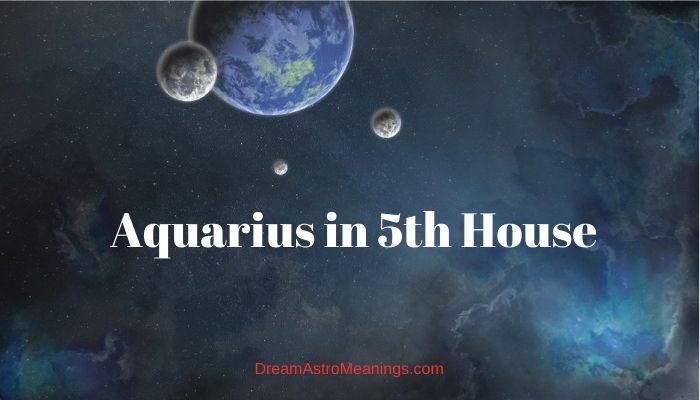 Hereinafter, everything described will also apply to other houses, under the signification of which the corresponding child goes (see here). Aquarius, a sign of freedom, love of freedom, brotherhood.

There are different kinds of “freedom”. In some types of relationships with children, freedom assumes that children are not crushed.

They do not control their every step. They are generally trusted. And they allow a lot to try and learn on their own, participating in their life, being included in it, staying in it, providing help and support when the child asks for it.

Another “freedom” looks less attractive. There is also freedom, but freedom from obligations. And I quite often have to see situations when the owner of Aquarius on the cusp of the 5th house does not directly participate in the process of raising his child.

Someone does not participate in connection with their work, someone with the arrangement of their personal life, or a banal unwillingness to burden themselves with a child. The reasons are different.

But the essence does not change from this. Such parents, fragmentarily appearing in the child’s life, give instructions to those who actually bring them up, and often make claims about the quality of upbringing.

But – they themselves (if not an attractive version of the manifestation of Aquarius on K5 is played out) do not “get sick” with the child, do not study with him, do not go to the section, do not know the names of their favorite characters, etc. All mothers raising children say about children’s problems or victories “we were sick / participated / did / taught”, etc. – or “our feet / hands / throat / ears”, etc.

And the negative manifestation of Uranus in relation to the 5th house removes this community, unity. There, the parent is quite seriously emotionally, and from that, often and physically, he is distanced from his child.

I note right away that this is an unseemly scenario, which, although not rare, is still not the only one encountered.

To make a more individual decision, we naturally need to examine the entire horoscope and especially carefully work with the Moon (in order to determine in general the inner ability to attach, and the inner need for emotional inclusion). This will of course be especially true for women’s cards.

In the negative version, Aquarius deprives a person of the understanding of responsibility for their child. Such a parent considers himself to be free in relation to his child.

Moreover, formally, of course, he can still act as an “educator of educators” – arranging demonstration performances for grandparents who are actually raising a child. But then, he collects his things, and goes into his world, where there is no regular place for a child.

Otherwise, it is freedom from obligations to the child. In addition to the fact that these relationships can be in themselves – not close, not emotional, cold (despite the fact that Aquarius is a masculine Sign, which means it is recognized as “hot” by nature, emotionally – it is cold).

Such a picture, when a parent distances himself, is also very common, when we see Aquarius on cusp 5 or any other responsible house. Generally speaking, the 5th house is probably more important here than any other describing relationships with children. Why – because ATTITUDE TO THE THEME OF CHILDREN IN GENERAL!!!

But the 5th house generally describes the desire to get in touch with the children’s theme. The desire to have children, the format of relationships with children that is most convenient for the Native, etc. This is precisely his sphere (along with the Moon, of course).

We also need to remember all this, even though our house is responsible for each particular child. All the same – the central leitmotif of relations with children in general is the 5th house (just like with money the 2nd, with spouses – 7th, etc.).

At best, this is trust, freedom in choosing your own path, lack of pressure with friendly participation. The parent knows the child’s interests, shares something, something does not, but does not insist that the child change them (of course, if there is nothing immoral or dangerous in them).

The parent allows you to be different from him, to be special (both in the sense of “gifted” and in the sense of “with some serious handicap, illness, or feature that other people consider a” defect “”). … He is allowed to have his own opinion, to choose his own path.

In a good case, this is a relationship filled with a lot of friendly support from both sides. Perhaps there will be no such penetration into the soul, such an energetic fusion with a child, which give Water Signs, but there will be a very powerful friendship, great human affection.

By itself, the child described by Aquarius can be very unusual, very creative, very gifted, and incredibly developed, a person with a strong intellect. Maybe a brilliant child. But at the same time, Aquarius can give both nervousness and extreme disobedience.

Such a child can be very difficult to control, he can be capable of challenges or demarches in relation to parents. Hyperactivity, neurological problems, etc. – can also be signs of a child walking under Aquarius. Another question is that a “good” parent will still accept a child and be friends with him as he is.

And in a bad case, this is often a reason for parents to abandon attempts to establish contact, according to the principle “he himself said that he does not need me!” – A very convenient form for refusing obligations, without unnecessary mental throwing.

A man who has 5 houses in Aquarius loves chatting with interesting people and unusual encounters. Such people choose themselves as friends of bright personalities and presume to be engaged in unusual and unusual for the surrounding occupations.

Such people have innate communication and an active desire to participate in the life of the community as a whole, as well as a specific group in particular.

Such personalities have a love for art, more often for something new and avangard. More often than not, these people can creatively realize themselves only in co-operation, but not alone.

Any relationship is often enough fleeting, permanent and indefinite. Lack of volitional efforts leads to difficulties in the development of already existing talent.

This is a dangerous tendency, when a person is ready to bite the table, a terrible and unbelievable potential due to the reason of banal laziness.

It is extremely important to pump in yourself the innate gifts and talent, capable of leading to wealth, popularity, full realization and a happy life. It is important to use any chance to refine your setups and improve your performance.

In other words, the power of will plays an important role in his life, so that you cannot start and give yourself to the negative sides of the character, like apathy and laziness.

The images of “I” in such people are very often directed exclusively in the future. So, a person envisions himself to be the most inventive, quick-witted, irresponsible, etc.

But in the future, similar ideas often do not go like this, so they remain only unrealized dreams, at best, on a level playing out. The creation of such illusions, and the ensuing self-deceptions very often lead to states of frustration, strong discontent. Influence of the main houses on the icon of the zodiac Aquarius.

These people should create an image of me, which allows them to accept the person who is like Religiousness is manifested through an intellectual connection with God, through which a person will receive prompts and certain signs.

In the professional sphere, she can show herself well in working with children, in the sphere of creativity and technical skills, where a developed intuition is required and to be creative.

In the family life, a person can be sufficiently incapable, easily fascinated and also easy to find. What about children that their nutrition can make for an individual one of the important goals in life.

Greater pleasure is given to him by communicating with his children, developing spiritual strength in them and giving them the right to self-expression and co-original. Ideals of a free and creative personality in the upbringing of children for such people are priority.

A person who has Aquarius 5 in the house loves communicating with interesting people and having unusual meetings.

These people choose bright people as friends and prefer to participate in unusual or different activities than the people around them.

These people are inherent to innate sociability and an active desire to participate both in the life of society as a whole and in that of the specific group in particular.

These people have a love for art, most of the time they are attracted to the new and avant-garde. In most cases, these people can perform creatively only on the team, but not alone.

In entertainment, preference is given to loud and colorful events with many participants, such as concerts, contemporary art exhibitions. Love relationships are often fleeting, superficial, and impermanent. Lack of determined efforts leads to difficulties in developing existing talents.

If you wish, you can request your Natal Chart and know your destination at an unbeatable price. The images of the “I” in people with an Aquarian house are very often directed exclusively towards the future. Thus, a person is presented as the most resourceful, penetrating, unrecorded, etc.

Such people must create an image of the self that allows to accept the person as he is at that moment. Religiosity manifests itself through an intellectual connection with God, through which a person receives clues and certain signs.

In the professional realm, it can work well with children, in the realm of creativity and in those professions where intuition and ingenuity are required. In a family life, a person can be quite unstable, easily addicted, and also cold. As for children, their upbringing can be one of the important goals in an individual’s life.

It is a great pleasure to communicate with your children, developing in them spiritual strength and giving them the right to self-expression and their own originality. The ideals of a free and creative personality in the education of children for these people are priority.

“I” siblings are overly mental and tend to be too future-oriented, or, conversely, too attached to the present.

In the first case, a person invents an image for himself, which he is not able to follow, endows him with features that, in essence, he does not imagine well, so that the image turns out to be too unviable.

For example, a person wants to be inventive, have a brilliant mind, look into the future, or, say, never be jealous; however, the image created from these traits is unreal for this person, and, moreover, it is too mental (and therefore lightweight) to become a role to play in life – and the result is deception of oneself and others and constant frustration.

In the second case, a person, on the contrary, focuses his image on the present himself, but not on the potential inherent in himself, on what actually is, has long been known and very tired.

Naturally, such an image, created with a certain amount of disgust, but without imagination, is rather wretched, but viable, although in fact a person profanes himself, prohibiting both creativity and development.

The study proceeds along the path of comprehending its most pressing problems of development and synthesis of external images that have the possibility of real existence, but at the same time are open for information from the future.

External religiosity in this case is expressed in a mental connection with God, which shows a person his future and helps to orient himself in the present, correcting the images of “I” (at low levels of religiosity this happens in addition to the person’s consciousness, at higher levels – with his direct participation).