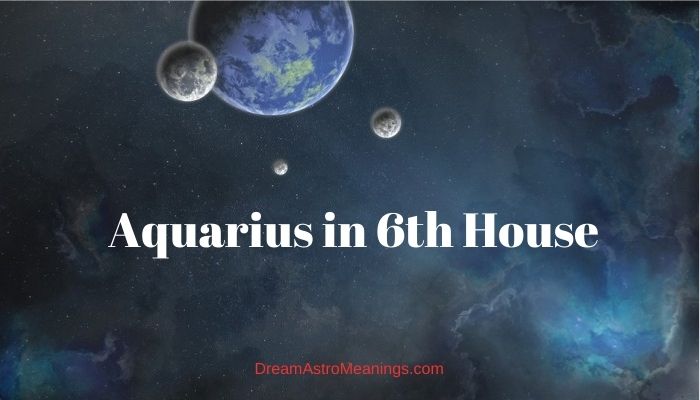 This person will have ideas at work, and it is good if they turn out to be at least somewhat practical, and he will try to test them before direct implementation.

Aquarius ideas come from a too distant future, so it is not easy to adapt them to practical activities, and especially to everyday work.

If, however, they are completely suppressed, then the person becomes very boring to work, and he can fall into despair and depression.

If you do everything according to the template, then it is better to die, he thinks, and begins to work extremely inattentively, and his thoughts fly away to no one knows where, to great damage to the entrepreneur and evolution as a whole.

This person needs to learn long and hard to work, adapting his tools, new and original, to his actual needs, to do the work that fate offers him, which is not always romantic, but his efforts will not be in vain.

This person will be democratic and friendly with servants, and will not be inclined to count his own and other people’s services. What he does not want to do, he simply will not do, apologizing or suddenly disappearing for a while.

In relation to his health, this person may have very unexpected ideas, but they must be implemented with caution, not forgetting about the tried and tested old ones, like walking in the fresh air with bare feet.

His state of health is primarily expressed in a good mental background – thinking is not too agitated, but not depressing either, and from time to time come, without greatly disturbing the general balance, interesting considerations or just paradoxes; the head is open and free.

Inventive, original in his art and at work. Likes to collaborate with friends in a group. However, due to his inconsistency, he often loses interest in the group’s project and does not want to see it completed. Methodical and technical in the profession.

Dislikes monotonous, formulaic work. She always does her job well, which is what she is proud of. Democratic and friendly with subordinates.

Bored without work, the best rest is a change of occupation. The state of health is expressed in a good mental background: the head must be clean and work freely. Shown are walks in the fresh air and walks barefoot. Can be dangerous in childhood.

He is in danger of bodily harm. He will be healthy if he avoids nervous exhaustion, excessive workload and pessimism. You should take care of your diet and groom your body. For the lungs, colds and respiratory diseases are dangerous.

Women get sick a lot because of men. He gets sick a lot in old age, but he has an amazing psychic resistance to disease if the mind is disciplined. If he can withstand the battle with the disease, then he can become an excellent healer, healing other patients.

Natural physiologist, but not a psychologist. Instinctively knows what to eat for various diseases, knows how to cook, carefully observes hygiene, boils dishes, and does all the dirty work with gloves. Loves small pets.

The owners of the 6th house in Aquarius are quite resistant to common viral infections, and generally do not depend much on the general epidemiological picture.

Pure Aquarius diseases are usually associated with the state of their own nervous system.

“All diseases from nerves” – this is just about them. And on the “nervous soil”, as you know, you can get a bouquet of a wide variety of diseases – from asthma before enuresis.

Due to the fact that the root of the health problems of the owner of the 6th house in Aquarius is not associated with objective reasons (such as viruses), but with a subjective reaction to what is happening (“nervous response”), it is far from determining the effectiveness of their treatment with conventional methods aimed at relieving symptoms not always possible.

Sometimes – they react well, sometimes – there is no sense in their treatment. Of course, these are unstable and nervous patients.

Those who know that they do not need to worry, but the more they try not to worry, the more they strain (especially with the defeat of Uranus and the 6th house in general, including the generation of the lucky owners of Uranus in Virgo in conjunction with Pluto).

As a rule, the owners of the struck Uranus (Aquarius) in the 6th house, as well as the Moon struck by Uranus (not even belonging to the 6th, 8th, 1 or 12th houses), are extremely nervous people for whom the normal and natural process of excitation-inhibition is of great difficulty…

For example, these can be hyperactive children, prone to hysterical states after which they fall from powerlessness. Often, enuresis is a concomitant disease.

Or adults, poorly tolerated nervous stress. But in adults, the reaction often goes through the organ that is affected by Uranus – for example, the already mentioned Uranus in Virgo.

Problems with a child crying in kindergarten can unsettle a mother for a long time – firstly, because for her this period it will be associated with severe nervous stress, and secondly, this stress will provoke intestinal problems (Virgo), it can give spasms, pains, constipation or diarrhea, appetite may be impaired. There may be skin lesions, etc.

And if this Uranus is also in conjunction with Pluto, then immediately oppressive thoughts, a suppressed state, which is replaced by powerful outbursts of accumulated nervousness in the form of hysterics and seizures. Potency may decrease or hemorrhoids begin, etc.

That is, in principle, this tension can manifest itself in different ways, but the reason is the same – the strongest nervous over excitation.

In general, the owners of the 6th house in Aquarius (especially with defeat) are more or less characterized by attacks of hysteria (more often, of course, women and children).

You remember, I hope that the 6th house is not only health, but also attitude to their household duties, work, and homework for schoolchildren.

Of course, when working with a Client, a lot of questions are posed as smoothly as possible, you will not hear an answer to all of them, and it is not always necessary.

But if you observe your loved ones who have Uranus (Aquarius) in the 6th house, especially when they are defeated, you will surely notice how many of them get tired as a result of their usual work!

And how actively they throw out their tension on others! So, for example, it can be very difficult for a child to sit down for homework. Mothers quite often come with the question, “what to do?

I have a friend who periodically asks her mother to help her with household chores, but when she starts doing something, SUDDENLY, for no reason at all, she is attacked by an attack of aggression, and she almost forcibly pushes her mother out of her house.

Naturally, such manifestations speak of a nervous illness, and are, in fact, the first symptom of an incipient disease.

Uranus is the planet of surprises, therefore, seeing such manifestations, you should consult a doctor, since otherwise, everything can end extremely sadly for the cardholder. And this sadness can lie both in schizophrenia, for example, and in a stroke or heart attack – since Uranus controls these troubles.

These people are generally prone to diseases of the nervous system in the literal sense. Their problems are neuroses, neuritis, epilepsy, paresis, nervous tics, stuttering, and speech problems in general. There are also strokes, heart attacks (Leo in the 12th house) vascular dystonia.

More unpleasant types – schizophrenia, Parkinson’s disease, cerebral palsy, also Uranus disease. It is believed that under the influence of Uranus and Aquarius, Down’s syndrome occurs. I can neither confirm nor deny this opinion, simply due to the lack of my own statistics.

The house of service as the highest value of human nature determines not only the household duties that we must fulfill in order to reach our destination, but also humility, recognition of greatness in other people, the ability to humbly accept rewards and pay off debts on time.

Health as a gift for the correct perception of trials or illness as restrictions on the path of development, everything can be predicted and harmonized along the line of the 6th house.

Aquarius on the cusp symbolizes a creative freedom-loving person who does not recognize the rules and plays his own game.

It is especially difficult for him to work through the main aspects of the 6th sector: the daily routine leads to depression, hence the layoffs, quarrels with the bosses, change of profession, nervousness and mental problems, because it is not easy to start from scratch in different areas, trying to retain past achievements.

The ruler of the 6th house in Aquarius, Uranus, always encourages the native to improve and modernize his place of work.

If there are no negative aspects, most likely, he will already come to the office with the best equipment with advanced gadgets, and will receive the necessary equipment for personal use.

But in any case, the owners of the 6th house in Aquarius will find a way to speed up the work process by connecting technical innovations or skillfully shifting some of the responsibilities onto less creative colleagues.

They are not to be occupied with imagination on this path. Children with a 6th house in Aquarius are difficult to seat for lessons.

They shy away from household duties, inventing stories as reasons. In adulthood, the ability to come up with a good reason not to come to work, if you don’t want to, is preserved, so it is better for such an employee to immediately be given the opportunity to work actively at will, in order to relax more due to what was done in advance.

The main lines of influence of the 6th house in Aquarius on fate and character: an original approach to solving any problem, which often leads to a tendency to reinvent the wheel instead of simple and quick action; creativity, the ability to do everything quickly in order to quickly get rid of unpleasant affairs and start an interesting part of the work.

hovering in the clouds, procrastination, optionality, lack of a sense of time: being late, delaying deadlines, starting to complete the task at the last moment; the need for a free schedule, no dress code, the need to obey and express respect to higher ranks;

Democracy and friendliness in communication, especially in relation to subordinates, a keen sense of justice, which often leads to conflicts with management and dismissals.

6th house in Aquarius is an indicator of remote work from home, but not for oneself, but being attached to a large corporation with the opportunity to attend corporate events, master classes, symposia. A native needs a team to shine, only he does not intend to obey its rules.

The native suffers from an overstrain of the nervous system, and if Uranus is aspected by harmful planets, then sudden injuries often occur out of the blue.

The nature of the diseases is always the same: a chronic problem is aggravated by sluggish symptoms and suddenly explodes with a life-threatening ending.

In the mild version, the accumulated nervous tension, suppressed conflicts and stresses result in tantrums, in the worst case, heart attacks, strokes, and thrombus separation occur.