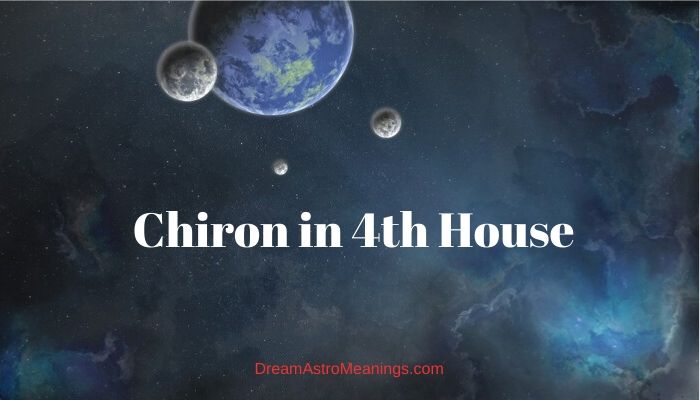 Natal charts present with a wonderfully complex pattern of elements, each playing a specific role in an individual’s chart, that unique diagram representing the whole life of the native, the past, the present and the future.

Most people know only their Sun sign and equate it with the very term of horoscope.

Well, the sun sign is a very important one, though just a constitutive element of the whole chart.

Astrological charts are divided into twelve houses. These fields are like a theater stage for the planets that were actors, with signs, representing their roles.

There are other celestial bodies to be included in a natal chart report, besides the ten planets (the Sun and the Moon included).

Chiron is one of such elements. We shall see what is it about and how it affects the experience of the Fourth House.

The Fourth House represents the beginning and the end of all things.

It is also about the attitude towards ancestry and ancestors, family values, history, homeland and so on.

The fourth field is a Water house, which indicates it has to do with emotions, needs, with matters of the soul.

This is the field mostly about the family; it is about our own family, the home we have grown up at, our childhood circumstances and especially the relationship with our real father. It is about how we envision family, the image of a family.

This is the house of our roots and our origins. It tells about where did we come from and how it affects the rest of our life.

This is the field about our family background, including the traditions of our family and values.

The Fourth House is a cadent one, linked to the sign of Cancer.

Mythological Chiron seems to have much to do with a little planetoid Chiron, the very important element in astrological charts.

So, let us learn something about this mythical figure.

Chiron was a character in Greek mythology. He was a son of Cronus the Titan and the Oceanid Philyra. Some other versions differently describe this relationship.

One way or another, Cronus was in a shape of the horse, when this particular connection is in question.

Chiron was a centaur, but he was a very special one, much different from the rest of his centaur kin. Centaurs, although strong and mighty, were not exactly fellows one would like to have around.

They were wild, aggressive, violent, rude and undisciplined. Well, centaurs were creatures of the wild. However, Chiron was different.

He was educated, well-mannered, kind, noble, supportive and just. Chiron lived in Thessaly, mostly on the Mount Pelion, in his cave. Mythology also says he was immortal.

Myths know him as a teacher and a friend of many famous Greek heroes you have most definitely heard about. They were Achilles and his beloved friend Patroclus, Jason, Aristaeus, Actaeon, Phoenix the son of Amyntor, Heracles.

Chiron was a supporter and tutor to some of the immortals, such as beautiful son god Apollo, the god of wine and festivities, Dyonisus, the god of medicine, Asclepius.

Chiron stood as a noble teacher, a good friend, a supportive tutor. He taught heroes riding skills and hunting, medicine and playing music. Overall, he was a very positive character.

The wise centaur was known as an amazing healer, but the only one he could not heal was himself. The story of his death is both sad and noble and it beautifully illustrates Chiron’s astrological role, to some point.

According to the myth, Chiron was wounded by one of Heracles’ poisoned arrows. Now, Heracles never intended to hurt his dear friend, but it happened as an accident.

Heracles was persecuting wild and violent centaurs and Chiron got mistakenly shot at this occasion.

He was immortal, so he could not die, but the pain he had been suffering was so unbearable that he pleaded to Zeus to release him from the immortality and let him sacrifice his life for the bound Prometheus, the light-bringer of the humankind.

Zeus granted his wish and let him pass to Hades. Another version says that he was taken into the sky and thus the constellation of Centaur or Sagittarius came to be.

In any case, Chiron’s act was both an act of self-deliverance, but also of sacrifice.

This Chiron became the savior of the greatest benefactor of the humankind. Let us see what Chiron represents in astrology.

The astrological role of Chiron is very important. We could say that Chiron points out our weakest point, our Achilles’ heel.

Although its effect is commonly linked to that of Saturn, considering both were associated with pain and suffering, they are not the same.

While Saturn tends to restrict us and form very strict and hard structures, often leading us to misery, despair, sorrow and else, Chiron is more delicate.

Some authors explain the effect of Chiron as a path of transformation, as a process.

Chiron makes us aware of our weaknesses and points we were the most vulnerable at, but Chiron is also a healer; it offers us a cure, a ‘recipe’ to cure our illnesses and tend our wounds. Chiron is a link, a path and a process from Saturn to Uranus.

Saturn forms structures and rules, restricting us, limiting us and making us miserable at times; Uranus destroys the forms, acts as a shock-effect and forces Saturn to do it all over again. Now that definitely seems as a struggle.

Chiron here is responsible for the quality of those forms. It is a very interesting element to look into when analyzing a natal chart.

The point in a natal chart Chiron stands in represents where and how you were vulnerable. It represents your deepest wounds, ones that are not that easy to comprehend and heal.

Chiron also offers the cure for those would, if you read its messages carefully. The house Chiron stands in would be the field of life you are most likely to feel vulnerable and sensitive about.

Chiron in the Fourth House – Chiron in 4th House

Chiron in the Fourth House indicates extreme vulnerability related to relation of the native with parents, particularly one of them, either mother or the father.

In the most cases, the native has a problematic relationship with one of the parents, while the other parent becomes the ultimate support, the safe haven, the protective and deeply influential one.

The native is attached to the parent on an unconscious level, so deeply that the parental figure is kind of deified and thus must be obeyed. It does not really matter if the native actually adores or despises the parent.

In any case, the native tries at all cost to avoid identification with models and characters the parent would like them to be or be with.

One of the characteristic problems of Chiron in the Fourth House is the tendency of the native to fall for hardly reachable people, idealizing them.

The native often becomes overly attached to the romantic partner, as a response and a consequence of the relationship with parents, usually that with the father, where the partner becomes a substitute for a parental figure.

They have a strong urge for belonging. They are very sensitive, emotional, compassionate and emphatic. They absorb others’ suffering and have a need to be needed.

This could be a very bad thing, since they easily cross the line; they do not let others to be independent. They want to be the only comforting shoulder, the only nurturer.

This rarely ends they way they imagine, because soon enough they start feeling exploited and manipulated for their good intentions. This turns them into spiteful, arrogant and bitter.

On the other hand, they feel extremely vulnerable about opening up and letting others protect them.

They feel as if the tutor was above their head, which was a reminiscence of their childhood and relationship with parents. Opening up to people feels like opening of old wounds.

On the other hand, they also feel as deprived of others’ love and attention. They are the type of people likely to become jealous of their own children and the attention they get from the partner.

They are very intuitive and more aware of what is happening to others than what they themselves feel. They often believe others should admire their intuition and such a talent.

They would even get angry if you don’t do so. Their wound are their unsatisfied emotions, which partially could be a consequence of relationship with parents in childhood, open violence done to them, ridiculing them, emotional manipulation or whatever of the sort.

This made them individuals who cannot get the emotional satisfaction they long for, mostly because they are incapable of openly and directly telling what they want and need.

The truth is that other people cannot read their minds and have no time for their puzzling behaviors, even if they love them.

The native would do great if he or she could make themselves say their emotional needs aloud or show them more directly.

In addition, they should let other people be what they are and be independent.

They could play their role of a guardian in a much healthier and actually a healing form.