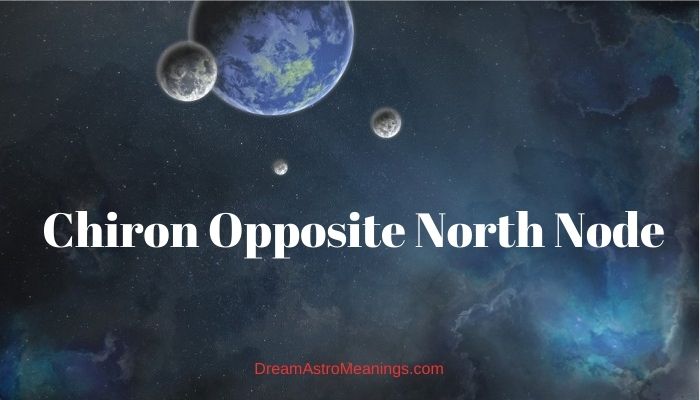 In the harmonious aspects of Chiron with the Sun (sextile, trine) we will be able to use our talents and creativity to work on ourselves and self-development.

With our creativity we shed light on what hurts us and so our wound becomes a source of inspiration.

Difficult aspects, such as opposition and squares, will give the need to hide flaws and wounds, in order for a person to maintain his reputation. Here the cause of the problem is the belief that wounds need to be hidden, that it is bad if we have a problem, and even worse if we face it.

Contrary to the previous example, people with disharmonious aspects of Chiron and the Sun (opposition, square) have no insight into what hurts them, often consciously choosing not to look in that direction.

The harmonious aspects of Chiron and the Moon (conjunction, sextile, trine) bring easy perception and visions of self-healing, enhance intuition and care for others, making Chiron a true emotional healer with a great ability to see other people’s problems.

Healing comes through a woman’s lineage and a deep bond with the mother.

It can even happen that a person, because he is rejected by his mother, learns how to be a mother to himself, which develops a huge potential for empathy, because by forgiving our roots and ourselves, we can forgive other people.

Here the key is insight, understanding and peace of mind. Inharmonious aspects (opposition, square) bring fears, emotional losses, inability to focus on what is important to them. He can look for partners all his life to replace the role of parents.

The wisdom of life is transmitted simply and through a form understandable to most.

The disharmonious aspects of Mercury and Chiron (opposition, square) bring illusions about the problem, or an unrealistic view of things, as well as the difficulty of presenting it in a valid way.

A person can see what is happening and what is hurting him, but he is not able to define it.

Moreover, if Mercury is threatened by difficult aspects, then it can happen to create a bigger problem than it was from the beginning.

The more difficult aspects (opposition, square) bring insecurity, a feeling of apathy, laziness, which hinder a person to approach in a realistic way what needs to be changed in himself.

You may have noticed that there is an upside-down gourd-like symbol with a “T” in your Astral Chart. It represents the North Lunar Node, also called the “Dragon’s Head”.

Kabbalah, for example, has a strong focus on the Lunar Nodes, as well as karmic and Vedic astrology, being valuable information for understanding our “astrological karmas”.

Therefore, it is important to understand what lunar nodes are, how they are generated and all their astrological dynamics.

We often place a lot of emphasis only on luminaries (Sun and Moon), personal planets (Mercury, Mars and Venus) and outer ones (Saturn and Jupiter) to draw our Birth Chart.

However, traditional Astrology treated the Lunar Nodes with the same importance, as did the Indian system of Astrology (Vedic Astrology or Jyotsna).

And this importance is quite justified, as ancestral studies reveal that the movements of nodes significantly affect our lives and paths.

Lunar Nodes are actually points of convergence between the ecliptic of the Sun and the Moon.

The name is derived from the lunar and solar eclipses, which only occur when the Moon’s orbit around the Earth crosses the Sun’s “path”.

They are actually two imaginary points in the sky. The exact location of the Moon’s Nodes arises from the meeting of the imaginary lines of the lunar arc and the solar arc in astrology. They originate through the intersection of the lunar orbit with the apparent solar orbit (since the Earth actually revolves around the Sun).

Thus, the positioning of each Node is indicated through this Sun and Moon relationship observed from Earth.

The North and South Nodes, also called Dragon’s Head and Dragon’s Tail (Rahu and Ketu in Vedic astrology), are opposites in each person’s Astral Chart, exerting opposite energies that must be worked through throughout our existence.

It is our challenges, the path we must seek to follow, and characteristics and behaviors with which we are natural, that we need to balance.

The South Node is exactly opposite the North Node in the Astral Chart (this is why many charts do not have both symbols, as one derives from the other and is in exact opposition).

It is the connection between our past, with characteristics that are intimately more natural, and the future, which has yet to be discovered.

By analyzing our Lunar Nodes, we can find tips and answers that will help us on our journey of evolution and growth.

The North Node is also called the Ascending Node and the South Node the Descending Node. These nodes also gained other names, metaphorically associated with the presence of a dragon in the sky.

The first studies of the lunar nodes were carried out from Hindu astrology. In India, legend has it that the solar eclipse occurs because “a dragon from the sky swallows the sun and ends up splitting into two parts: head and tail”.

This story from Hindu mythology has made the lunar nodes associated with the dragon metaphor to this day.

By remaining in the same place for more than a year, the Lunar Nodes are linked to great changes exerted above the individual plane.

Since antiquity, the eclipses of the Sun and Moon have always represented important omens for the planet Earth, and from this derives the karmic meaning of the lunar nodes in astral maps that represent the collectivity, such as cities, countries or institutions.

The Lunar Nodes in our birth chart help us to remember the journeys of the soul, both those that have been temporarily forgotten and those that are the paths and challenges of the current existence. They complete their zodiacal cycle approximately every 18 years.

In this way, people born under the same Lunar Node have quests they can relate to, as if they were a large tribe that has similar lessons to learn.

Chiron in transit with the North Node of the Moon transit acceptance of family responsibilities, good partnerships and decisions to start a family or offspring.

The North Node of the Moon is an aspect in which your love desires are in no way aligned with the desires of a loved one.

During this transit you will often think that your loved one does not love you and complain.

The North Node of the Moon is a transit in which you consciously create problems with your partner because you do not have the courage to oppose those people who have brought you to a state of anger, so you spit on your partner.

The North Node of the Moon is an aspect in which you give all your time to your loved one and family. You are aware that you used to neglect it due to business opportunities and desire to make money, now you want to make up for it.

The North Node of the Moon is the aspect where relationships in the family or with a loved one are the only thing that interests you now.

During transit you will be very attractive to the opposite sex and enjoy the views.

The North Node of the Moon is a transit in which you enjoy love endeavors. You are aware that you are irresistible to the opposite gender, so you take advantage of that.

However, during this transit, meeting a person from your past could shake your self-confidence.

The North Node of the Moon is a transit in which you give in to a loved one and try to bring harmony into your relationship.

During the transit you can decide on marriage or offspring.