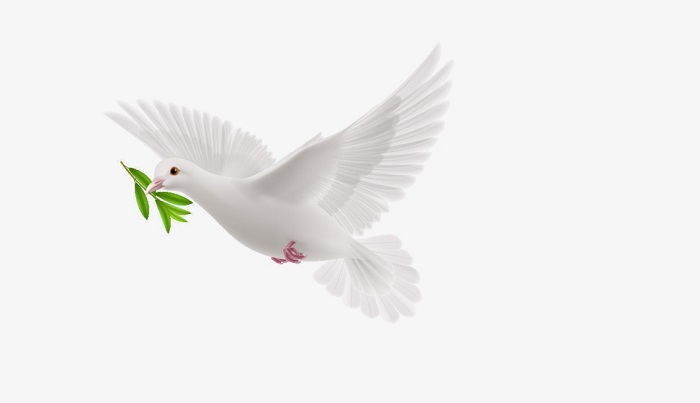 Dove with an olive branch is universal symbol of peace, grace and mercy.

This symbol unifies two also symbolically strong motives, those of a dove and olive trees.

Dove with an olive branch is a very old symbol, widespread all around the world and its meanings are usually very similar in nature, wherever it was used.

Doves have always been considered symbols of something good and graceful, often associated with femininity and motherhood. Doves and pigeons share similar symbolism and those two terms are often confused.

Those are not the same bird, as many think, but they are indeed very similar.

Symbolical meanings of both doves and pigeons are related to peace, tranquility and gracefulness.

Since ancient religions of Sumer and Phoenicians, these have been associated with principles of femininity and motherhood. Ishtar, one of the most worshiped Sumerian goddesses was often depicted as holding a pigeon.

Phoenician goddess Astarte, the deity of fertility and love was also associated with this bird.

Ancient Egyptians held them 3000 BC and in their culture, pigeons were considered symbol of innocence.

In Greco-Roman mythology, pigeons and doves represent love and renewal and are also associated with femininity and fertility. Greek Aphrodite and Roman Venus were both portrayed with pigeons. 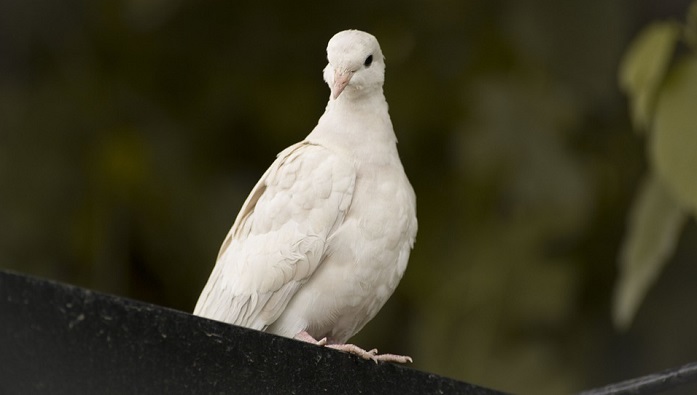 Dove had particularly a significant symbolic meaning in Ancient Greece.

It symbolized harmony and tranquility. It was also associated with number eight and was one of the positive symbols in prophetic interpretations from Dodona forest.

In Hindu mythology, pigeons were considered messengers from the underworld. Dove is a sacred bird in Hindu tradition; they believe that an act of killing a dove brings misfortune.

For ages, pigeons and doves have been symbolizing loyalty and longevity in Chinese tradition. There is an interesting belief from China, related to pigeons.

Chinese believe that a sparrow-hawk transforms into a pigeon on the occasion of the change of seasons in April, the day of spring equine. It happens the other way around, as well.

In Christianity, pigeon and dove have many meanings, all positive. In the Old Testament, they symbolize peace, good will and forgiveness, while in the New Testament they stand for Holy Spirit, love and the mercy of God.

The story about the great flood and Noah’s ark is one of the earliest stories on a dove as a messenger.

This story tells about the dove with an olive branch, so we will mention it later on.

Olive tree is one of symbolically loaded plants, to say so. There are many beliefs and legendary tales about olive trees.

One particular ancient Greek legend tells about a competition between Athens and Poseidon.

The two competed over the supremacy over the main city of Greek people, the city of Athens.

While Poseidon smashed his trident upon Acropolis’ rocks and produced a salt spring, Athens made an olive tree, full of fruits people could use.

People choose her gift and so Athens became the protector goddess of the city.

This is why olive trees play an important role in Greek folklore. The tree became symbol of immortality, divine intervention, fertility, abundance, health and longevity.

An olive branch, especially if carried by a dove, was taken for a symbol of peace and the Golden age.

Olive trees are very resistant and endurable, so they also represent strength and persistence.

Heroes of ancient Olympic Games were crowned by an olive branch wreath and they were awarded with vases filled with olive oil.

Chinese believe olive tree possess incredible properties and that it can neutralize toxins.

Japanese consider it symbol of kindness and success in learning and warrior’s path.

Olive tree has a great significance in Christianity; it is mentioned in the Bible for over thousand times. Moses, for example, has freed men who grew olives.

Olive branch has particularly an important meaning in Christian tradition. Archangel Gabriel is often portrayed as holding an olive branch.

Dove with an olive branch is one of the most widely known Biblical symbols, but also one of universal symbol of peace, hope and purity.

We have already mentioned the story of Noah’s ark.

This story is one of the earliest portrayals of a dove as a messenger that bring good news.

This is the reason why dove symbolizes hope, as well. According to the Bible, after the great flood already took place, Noah sent a dove to check out if it was over.

He did it for several times, until the dove finally returned carrying tiny olive branch in its beak.

This was the sign it found land and that the disaster was over. This is one of the strongest symbols of hope and calmness, peace and faith.

A dove with an olive branch has become universal symbol, widely present and appreciated.

Dreaming of a dove with an olive branch

The symbolism of this motif is clear, but if you dream about it, it gets a more personal meaning.

This pure symbol of peace could be a message from a guardian angel that tries to connect you through dreams.

This sign in dreams could be differently interpreted, depending on circumstances of a dream.

If the dream was entirely positive and it just happened you saw it, it is a promising dream.

It means you should not get discouraged by problems that might worry you in your life. You should be hopeful and have faith, for your troubles would definitely come to an end.

This motif in a dream also suggests you should have patience, because patience is wisdom.

Do not rush; do not try forcing things that cannot be forcefully changed.

A dove with an olive branch occurring in your dream suggests that sometimes you just have to wait for a storm to be over.

It does not mean you should surrender, but that there are forces and situations you cannot fight.

Sometimes troubles come upon your way, but are out of your power to control them.

You should not worry about it, the dove suggests, for the light will shine upon your path again.

The use of the symbol

The symbol of a dove with an olive branch universally symbolizes hope and peace and embodies all the symbolism of both dove and olive tree together, so people use it for various purposes.

It could be found as a motif in art, jewelry or other decorative and creative works.

In each one of these it represents the same thing.

For example, a pendant representing a gentle dove carrying an olive branch could be a symbol of faith in divine mercy and hope, so one might wear it to feel more close with divine powers.

It is not that the pendant itself creates a connection, but it is a channel for a person to make one on an entirely different level.

As a motif in art, a dove with an olive branch most commonly represents the Biblical motif from the story of Noah’s ark. It is a common motif in Christian art.

A dove itself also represents the Holy Spirit that descended upon Christ when he was baptized.

Dove also represents the human soul; it was a common motif in old Christian artworks.