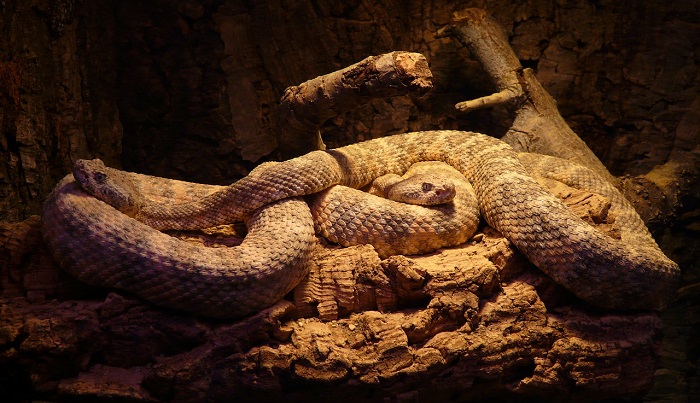 Snakes are truly amazing creatures, featured in myths, legends, religious and spiritual concepts, folk beliefs and old wives’ tales throughout the whole world. Symbolism of snakes is rich and complex.

Snakes were adored and worshiped, awed and feared of, hated and despised. Origins of snake related beliefs are probably as old as some of the first cultures on earth.

According to scientific researches and discoveries, one of the oldest known snake cults was that of the Python god. The snake was worshiped by a prehistoric culture in Africa, Botswana.

These evidences are tracked back into very far past. This cult is associated with prehistoric culture that probably existed seventy millennia ago!

According to scientist, it was possibly the oldest ritual ever.

Snakes are probably the first animals worshiped by humans, the first animalistic gods. Symbolical concepts related to snakes greatly vary, depending on cultures and traditions.

In Christianity, snake is commonly identified with Lucifer.

Snake is commonly used as a symbol and a motif to represent Satan. In other concepts, snake is something different, a symbol of life cycles and infinity.

The greatest majority of people is afraid of snakes, because they appear strange and because they do represent a real threat sometimes.

However, not all snakes carry deadly poison in their mouth. To some people, snakes are beautiful creatures; to others, they are scary and ugly.

Throughout the world and human history, they have been both admired and despised. 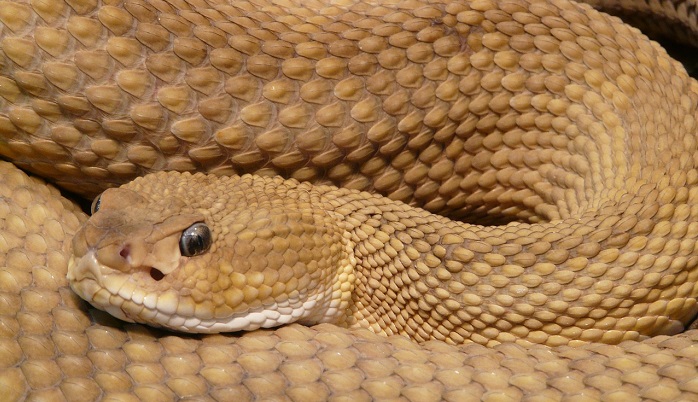 Before we move onto interpretations of rattlesnakes related dreams, let us go through symbolism of snakes in general.

It is of a great us to understand meanings of snakes, before jumping into the mysterious and strange realm of dreams, especially having such a powerful symbol within.

Snakes are considered magical and powerful creatures in numerous of the world’s tradition.

In the earliest depictions found in prehistoric caves, snakes were represented by a single, simple, infinite line. The line represents life and existence; it is simple, yet so full of meaning.

Perhaps the first people saw this strange animal as an embodiment of the idea of overall existence.

With time and development of various, countless branches of human ideas and beliefs, snake symbolism has only been growing stronger and richer. It took many forms and all sorts of snake related beliefs live today, as well.

Today we will talk about rattlesnakes and dreams about this specific snake specie.

Dream interpretations for snake related dreams are many, exactly because snakes in general represent all sorts of things.

In shorts, snakes represent life, existence, life cycles. One of widely known snake related symbols is that of Ouroboros, the snake that bites its own tail.

It represent the infinity of life, rebirth, death and life as inseparable from one another and so on.

On the other hand, these sneaky, silent and dangerous creatures are also associated with evil darkness, the Underworld and so on.

Rattlesnakes are well known for their unusual appearance with extraordinary tails.

Rattlesnakes are venomous snakes and there are about something less then seventy sub-species.

All rattlesnakes live in Americas, from southern parts of Alberta and British Columbia in Canada, to central Argentina. Rattlesnakes are not particularly large snakes, inhabiting various types of terrain.

They feed mostly on birds and rodents. Rattlesnakes chase away their own enemies by rattling their tails, before they bite with their venomous teeth.

Rattlesnake is one of American symbols, since the snake is found only in Americas. An old engraving, attributed to Benjamin Franklin himself, represents a rattlesnake, cut into pieces, as an allegory of the need of the colonies to be united against France, during the French and Indian War.

It was published in the Gazette, in May 1754. The engraving was based upon the myth of a snake that could come back to life once its pieces are sealed back together.

It said ‘join or die’. Benjamin Franklin is known to have possessed incredibly creative and visionary mind. He had great knowledge of symbols and heraldry in general; he even referred to this engraving as an emblem.

It is a very interesting story, in which we see symbolism of rattlesnakes as associated with certain cultural concepts, but also with old symbolism of snakes in general.

Dreams about rattlesnakes are similar in meaning with dreams of snakes in general.

Dreaming about specific specie of snakes gives additional meaning to general interpretation of snake related dreams. Rattlesnakes are known for their tails; in dreams, it is an additionally interesting motif.

Dreams about snakes are some of the most common dreams in all people.

The most common interpretation says snakes are a negative motif in dreams, but it mostly comes from people’s irrational fear of snakes, even if they live in an environment where there are no venomous and dangerous species or no snakes at all.

Snake could indeed be dangerous, but contrary to myths and beliefs that identify snakes with pure evil, these animals would not attack a human being unless they feel threatened and endangered.

Dreams about snakes (and rattlesnakes, in particular) carry many meanings. What is very important to take into consideration when analyzing such dreams is your own perception of the dream.

Maybe you are one of those who think snakes are beautiful and not repulsive creatures; the meaning would probably be different if you hate snakes.

Rattlesnakes in dreams are mostly associated with the idea of threat and warning, since they do use their tail and the sound to ward off enemies and to warn you not to come closer; otherwise, you will get hurt.

Besides that, rattlesnakes in dreams reflect all interpretations of having an encounter with snakes in dream realm in general. Let s find out more about specific scenarios.

Dreams about seeing a rattlesnake

The meaning behind a dream about seeing a rattlesnake depends on the context of the dream and of your own feelings related to it.

If you dream about seeing a rattlesnake in its natural habitat, not even noticing you and doing its own business, it could have different meanings.

It could mean you have irrational fears in your waking life and that you worry about things that are not an actual reason for concern.

If the rattlesnake is calm, quiet, does not make sounds with its tail or shows no interest in you, it definitely means you should relax and let things go as they do. There always will be problems in life; do not invent new ones that have no ground.

Alternatively, the dream is positive. It means that everything is in balance, just as it is supposed to be.

If you dream about seeing a rattlesnake that does notice you or even shakes its tail as a sign of warning, it indicates there is a threat in your life. However, it may suggest you are provoking negative events to happen, when there is no need to.

A rattlesnake represents danger, but it may represent something that is not your business and yet, you provoke it.

The dream suggests you should mind your own business, as well. It is not all yours to handle; sometimes you should avoid danger, not fight it.

This rattlesnake could be a positive sign of warning; it may not represent the danger itself, but it wants to save you from harm. It alarms you to keep your eyes wide open and save yourself or someone else from a threat.

Dreams about a rattlesnake’s tail

If you dream about a rattlesnakes’ tail, separated from its body, it indicates fake threats and fake danger. This dream suggests someone is making false threats on you.

There will always be people to try to take an advantage of weaker ones. Do not let them seduce and manipulate you.

This dream suggests you worry for no reason; something scares you without rational cause.

It has no head, it has no venom, it has only the tail that rattles. It is the same as with the saying of a ‘dog that barks, does not bite’.

Relax and gather yourself back together. Do not lose your temper, energy and mind over empty talk.

Dreams about a rattlesnake in your house

If you dream about seeing a rattlesnake inside your own home, it means you are indeed in some kind of danger. Perhaps the danger is within your own soul. The dream means you have let your fears, stresses and negativities consume you.

Maybe you have tried to avoid all problems and turn your back on them. However, they got closer to you.

Symbolically, it could represent your inner demons that you have tried to shut down and lock away. Well, you should always work on yourself. Think about the worst fears that make you feel insecure. They are real danger.

On the other hand, the dream could represent a threat from the outside that is now much closer than expected. You let negative people get to close to you.

Since rattlesnake symbolism is all about warnings, this dream also suggests there is time enough to make things up.

You could still chase away the snake from your home, being careful about it.

Alternatively, the rattlesnake inside your home could also be an alarming sign in a positive sense. It comes to your dream, so close to you, to tell you you should act fast. Saved by the bell could be the final result.

Dreams about a rattlesnake biting you

If you dream that a rattlesnake has bitten you, it suggest you let the danger come to close.

You ignored it; you ignored all the obvious signs that something is not right, because you did not want to see it. This dream tells about consequences of ignorance and recklessness.

Rattlesnakes are venomous snakes; the dream suggests you let someone intoxicate you, even if you already knew that person (or people) was not good company.

On the other hand, all dreams about being bitten by a venomous snake, be it a rattlesnake or another one, indicate illness, even terminal outcome.

A rattlesnake once again indicates you ignored signs; it could mean you did not take care about your own health and you would probably fall ill, because of that.

This dream suggests you should take care now, but it also says it is maybe too late.

Dreams about stepping on a rattlesnake

If you dream about accidentally stepping on a rattlesnake, the dream reflects your irresponsibility, recklessness, ignorance, unwillingness to hear others’ opinions, warnings and advices. It means you miss out some rather good advices and warning signs.

You think you can do all but yourself and that you do not need others to tell you anything. The scenarios of the sort often end u with ‘I told you so’.

The dream occurs to remind you good advices sometimes come from unexpected sources. If you take snakes as a symbol of evil, the dream would still mean the same.

You could always learn from your enemies, if you are only open enough to consider it.

The rattlesnake you stepped on in your dream could also be a protective and guiding spirit that you have ignored.

Dreams about killing a rattlesnake

The meaning is about the same if you dream about killing a rattlesnake, only more concrete.

This dream means you consciously reject all warning signs, believing either you do not need them or that they are not real.

To kill a rattlesnake in a dream could have another meaning. It suggests you are capable of dealing with threats and dangers on your own and that you do not want to let your fears consume you.