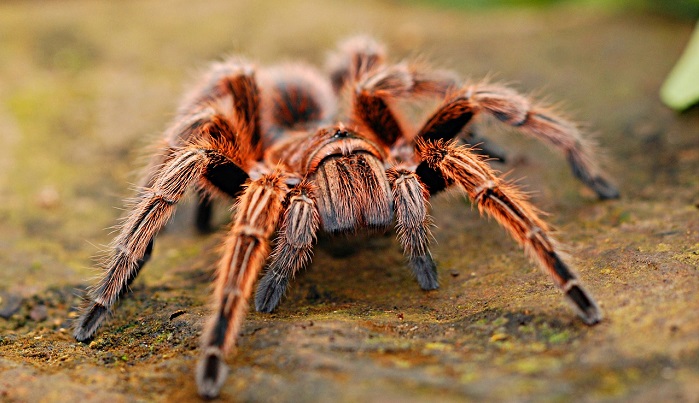 Tarantulas are hairy spiders which can range from 2.5cm to 10cm in length. Some species which are kept as pets, have hairs that can cause severe irritation of the skin, and sometimes even damage the eyes.

These insects comprise a large group of around 900 species so far identified. They live in the USA, in Central and South America. There are some species of tarantula, which live in Asia, Australia, Africa, and Europe as well. Some tarantula species are found in Italy, Portugal, Spain, Greece and Turkey.

They feed mostly on large insects and arthropods like millipedes, centipedes, other spiders, etc. They use ambushing methods to capture their prey. They sometimes kill and eat lizards, bats, birds, mice, as well as small snakes.

They are all venomous and their bite can cause great discomfort. Some even cause hallucinations, muscle cramps, etc. some people are allergic to their venom, and in such cases the bites can end up being deadly if left medically untreated.

In certain cultures, like the Venezuelan, they are considered a delicacy and they are hunted for food.

Because of their appearance, people often have fears of tarantulas. They symbolize objects of fear and they are usually not considered as good symbols in dreams. If they do appear in your dreams the meaning of the dream will depend upon your own attitude towards spiders in general.

Many people have a strong phobia of spiders, called arachnophobia. That is a phobia widely spread, and the fear is usually explained as being the result of human evolution. People have feared spiders because of their venom and potential disease for millennia. Of course, there are many other causes of this phobia.

These dreams often indicate being betrayed by someone you consider close. Maybe you will soon be strongly disappointed by some person who you consider very close. Maybe someone will abandon you in your time of need which might shock you. This dream could also indicate getting angry because of that.

Tarantulas in dreams are often a sign of being surrounded by enemies. It often indicates people in your vicinity with bad intentions towards you. Maybe this dream indicates that you will soon experience some loss. You might be forced to participate in some unpleasant conversations. 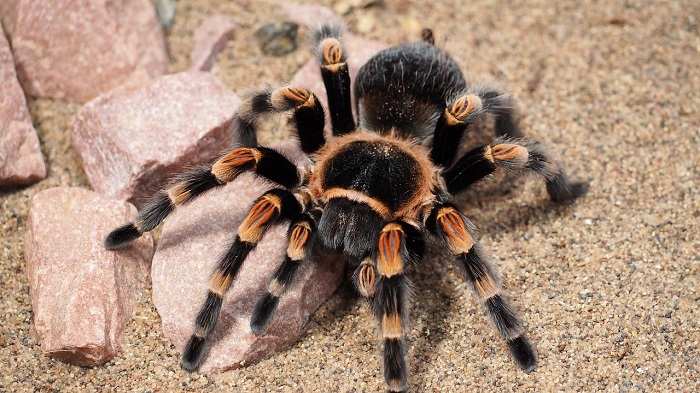 In some cases, a dream about tarantulas could indicate the worsening of your health. Maybe your health will be jeopardized unexpectedly. This dream often reveals the dark side inside of you, and it might be something you are not aware of.

Tarantulas in dreams are often a sign of love disappointments. They might also indicate despair and hopelessness in some situation. Maybe you are overwhelmed with fears and anxiousness. Tarantulas are often a symbol of something you fear. Sometimes these dreams indicate something bad possibly happening to you.

A dream about tarantulas could be a sign of feeling trapped by something in your life. Maybe you feel like a prisoner of your job or your relationship, your home, etc.

In some cases, dreams about tarantulas could symbolize a person in your life with a cruel and deceiving personality.

These dreams often indicate taking on way too many risks in life. Maybe it is a reminder to think well before making some important decisions or taking some action.

Sometimes, a dream about tarantulas has a different meaning, and indicates the end of a difficult period in your life and being able to relax finally. It could also indicate being victorious over your enemies.

This dream could also be a reminder to begin working on developing your spiritual side.

These dreams could also indicate being rewarded for your past efforts by your superiors, which might include a promotion or a raise.

Dreams About Tarantula – Interpretation and Meaning

Dreaming of a tarantula in general – If you dreamed of seeing a tarantula or several tarantulas, that dream could indicate being forced to have a serious conversation with someone. That might be something you have been avoiding for quite some time.

Dreaming of being bitten by a tarantula – If you dreamed of being bitten by a tarantula and feeling the pain from the bite, that dream is a bad sign. It is usually a warning about your behavior and attitude towards other people. Maybe you tend to gossip and criticize others, usually at your workplace. Your behavior might jeopardize your reputation and position at work. You need to begin controlling your reactions and your words.

A dream of a tarantula bite could also be a warning about the potential trouble you might get yourself involved soon. Maybe you will be attacked by people at work who envy your success.

It is often a sign of being surrounded by people who are jealous at you. This dream could also indicate the failure of some projects or endeavors, and experiencing financial losses.

Dreaming of a small tarantula – If you dreamed of a small tarantula, that dream is not a good sign. It is often an indication that you refuse to learn from your past mistakes. It could also indicate minor problems you could soon encounter. Sometimes it could be a sign of a scandal you might be involved in soon.

Dreaming of a very big tarantula – If you dreamed of a giant size tarantula, that dream usually describes your attitude about something. You are probably exaggerating in some situation and making a big deal out of a minor issue.

Dreaming of having a tarantula as your pet – If you dreamed of keeping a pet tarantula, that dream is usually a good sign. It could indicate new beginnings, like new jobs, relationships, new projects, etc. It indicates satisfaction and happiness because of the things you are about to experience.

Dreaming of a tarantula chasing you – If you dreamed of being chased by a tarantula that dream could be a warning about your behavior. It might warn you to begin behaving more mature in some situations. It could also be a sign of trying to avoid some responsibilities you have.

This dream can also have a bad meaning, indicating financial problems and losses, as well as other difficulties you could soon experience.

It could represent a warning about some decisions you need to make, so think carefully before you decide anything.

Dreaming of a lot of tarantulas – If you dreamed of seeing a lot of tarantulas gathered in one place, that dream is usually considered a good sign. It could indicate soon receiving much needed help from some family members or friends. This dream is also an encouragement to seek help when you need it. You have many people in your life that would gladly help you.

This dream often reminds you to express your gratitude for the help and support you receive from your loved ones.

Dreaming of a black tarantula – If you saw a black tarantula in your dream, that dream is usually a bad sign. It often symbolizes disappointments, deceit, dishonesty, betrayal, and similar bad experiences and feelings.

Dreaming of a white tarantula – If you saw a white tarantula in a dream, that dream is a very good sign and has a spiritual meaning. It indicates the rise of your hope and the process of healing you are going through.