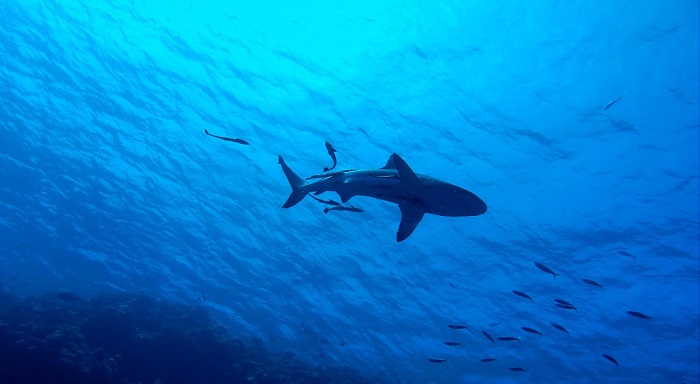 Sharks are one among the deadliest animals on the planet. These predators don’t have many natural enemies.

Because of their fierce reputation they don’t have a good meaning in our dreams as well.

Sharks often symbolize being threatened by something or someone and the need to protect yourself against potential attack.

Sharks can symbolize your enemies and sometimes they symbolize deceit and foul play.

In some cases, dreams about sharks symbolize danger in your environment or some changes which might happen in your close surroundings.

A dream about sharks can cause a boost of your confidence and encourage you to be active in pursuing your dreams. This dream reminds you to take action to achieve your goals.

It could also be a sign of opportunities for advancement opening before you and reminder to be agile in seizing them because someone else might grab them before you manage to.

Sharks in dreams can have many different meanings, but the most common ones are: aggression and negative emotions, vulnerability and fear, ruthlessness and deception.

Aggression and other negative emotions

Sharks are very aggressive and dangerous animals. That is why they symbolize aggression and other negative emotions. If you dream about sharks, that might reveal the inner state of your being. 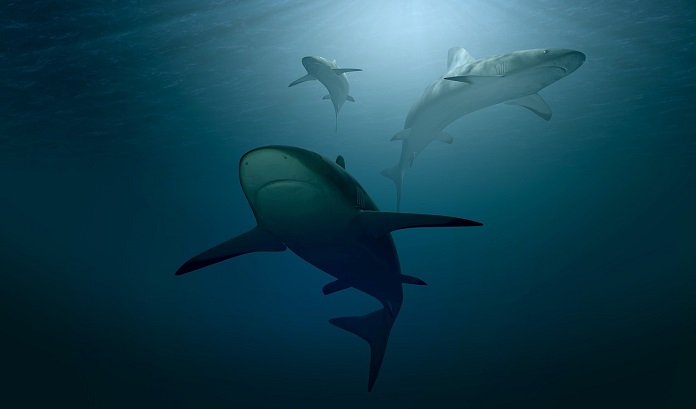 Because of that, you might be prone to outbursts of aggression and anger towards the people from your surroundings.

In some cases, sharks in our dreams reveal some repressed emotions we are not aware exist.

These are often negative in nature, such as anger, resentment, depression, etc. Possibly some person from your life is causing these emotions and this dream calls your action in dealing with these emotions so you can release them.

These dreams are usually caused by the current state of our feelings. You might be feeling hostility towards someone, and that is why you dream about sharks.

This dream could also be caused by a recent conflict you had with someone and you are still disturbed because of it. You might also be feeling agitated and unable to control your reactions, and this dream is warning you to watch your behavior because it might cause you troubles.

People sometimes dream about sharks when they are experiencing some issues in their romantic relationships, mostly related to their independence. Possibly they feel controlled by their partner and feel they don’t have enough freedom to express themselves and their true nature.

If you have such issues with your partner, and have dreams about sharks, this dream should be considered a suggestion from your subconscious to confront your partner with the things bothering you and try to resolve them together so you won’t jeopardize your relationship.

Sharks can appear in dreams when we have extreme fears of something. Maybe you are currently going through a difficult period in life and you fear the future or the consequences of some actions.

Maybe you are afraid to get rid of something which is a burden to you because you fear what might happen if you do that.

We often dream about sharks during times when we feel vulnerable because of something or in some situations.

Maybe some circumstances in your life are causing you to feel insecure or in danger. Maybe you fear some situations where you don’t have control. Dreams about sharks often symbolize situations in our lives when we feel that we cannot change anything.

You could be expecting some event to happen and you fear how it will all work out.

In some cases, a shark in your dream could symbolize some person in your life which frightens you. Maybe you feel insecure or you don’t belong somewhere and that is the reason for having a dream about sharks.

Sharks are a symbol of ruthless and unscrupulous people. If you had a dream about sharks, that can be one of the meaning of your dream.

Maybe you are dealing with a person who is greedy and vicious and has a deceitful nature. Maybe you have been tricked by someone who fits that description or you might expect something similar happening to you soon.

This dream might be preparing you to be cautious in the presence of such person. Try everything you can to prevent this person from harming you in any way.

Dreams about sharks could be a warning about some person from your surroundings. When you have such a dream you better be alert because someone might try to betray you or deceive somehow.

A shark in your dream could reveal someone’s true face. Someone you consider very close might only be pretending to love and care about you. That person is a fake friend and might try to harm you if a chance appears.

After a dream about sharks it would be wise to consider which one of your friends might not be as honest and well-minded as it appears to be.

Dreams about sharks often reveal the way you feel. Maybe you feel as if there are not many people you can trust and rely on, and that is a feeling which bothers you.

Often dreams about sharks symbolize people or situations that are ruthless and vicious.

In some cases, this dream reveals your desire to have something regardless of its price.

Dreams About Sharks – Meaning and Interpretation

Dreaming of seeing a shark – If you dreamed about a shark, that dream is not a good sign. It usually indicates being threatened by something or someone and being in real danger. This dream is an encouragement to face whatever is endangering and fearing you and deal with it. Overcome the fear to clear the path.

This dream often indicates fears of some obstacles and facing them. Sometimes it is a sign of having some powerful rivals.

They often indicate not having enough control over your life, or not controlling your life at all. They are also a sign of overwhelming thoughts and fears.

Maybe you or someone else is feeling angry or hostile. You could be going through a difficult period and feeling negative which is causing blockage to your progress.

Dreaming of a shark attacking you – If you dreamed of being attacked by a shark, that dream is a bad sign. It usually indicates not being able to accomplish some desired goals with ease, and instead encountering many obstacles along the way. A dream about sharks attacking you, are often a sign of difficulties and bad luck.

Maybe they are a sign of low self-confidence. These dreams often indicate someone trying to attack you in reality or trying to take away something.

Maybe you are putting yourself in jeopardy with your own actions. This dream usually signifies the beginning of a difficult period in your life.

Dreaming of a giant shark – If you dreamed of a giant shark, that dream should be considered a bad sign. It is usually a sign of some danger you might soon encounter. Maybe you will experience something which could change your life completely.

Dreaming of a shark’s fin – If you dreamed of seeing a shark’s fin, that dream usually reveals something about you. Maybe you are very naïve and trust people in general. It could also indicate having some fake friends you shouldn’t trust.

It is a sign to evaluate who your true friends are and remove the ones you cannot trust from your life.

Dreaming of a shark chasing you – If you dreamed of a shark chasing you, that dream usually reveals your current emotional state. You might be trying to ignore some emotions or hurtful memories from the past. It could also be a sign of problems you could soon encounter which might jeopardize you as well as your self –esteem.

If the shark was chasing you under the water surface, that dream could indicate having some irrational fears.

Dreaming of sharks swimming around you – If you dreamed of being surrounded by sharks, that dream is not a good sign. It is usually a sign of problems you will soon experience, and they are often related to your work. It might indicate encountering obstacles while trying to achieve some goals.

It might also indicate not having anyone to rely on. This dream could also be a sign of illness or health related issues. 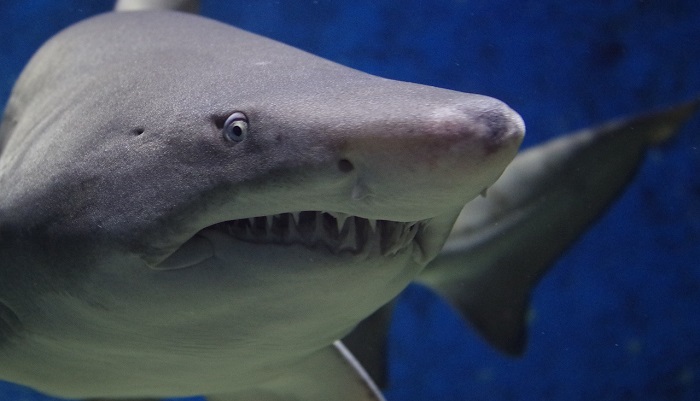 Sometimes this dream could indicate someone close taking advantage of you.

Dreaming of a shark biting you – If you were bitten by a shark in a dream, that dream should be considered a bad sign. It could be a sign of betrayal or someone hurting you in some way soon. In some cases, this dream could be a sign of confusion regarding your future, and remind you to reassess the goals you have.

If you realize that you still have the same goals, this dream encourages you to begin pursuing them.

Dreaming of a shark attacking you on the beach – If you dreamed of being attacked by a shark on the beach, that dream is not a good sign. It could be a sign of some unpleasant events expecting you soon. Maybe you will be disappointed with your new job, or something else might turn out to be not as you have expected, which might disturb you a lot.

If the shark caused you injuries, that could indicate being affected very much by the events that will happen.

Dreaming of a dead shark – If you saw a dead shark in your dream, that dream is usually a sign of some kind of relief. Maybe you will end some difficult situation, or you will lose interest in something which has been occupying your attention for a long time. It could reveal your current vulnerability. It could also be a sign of some good things happening soon.

Dreaming of baby sharks – If you saw baby sharks in a dream, that dream could indicate having a childish and immature approach in some serious situation. Sometimes it is a sign of some minor problems you could soon encounter.