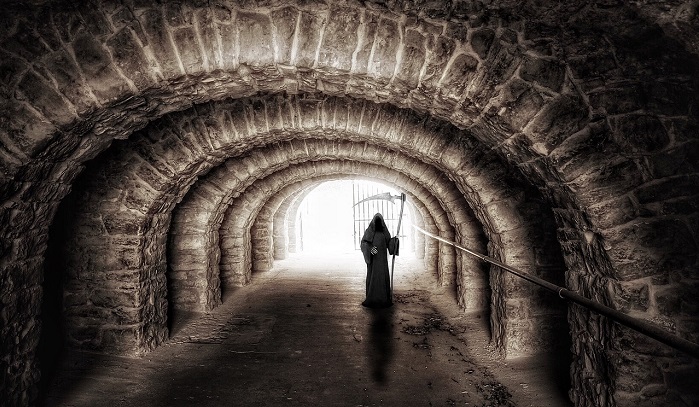 Death is often depicted in a form of a being, which is known as the Grim Reaper. It is a mythological figure which announces and causes the death of the person whom it visits. In some mythological stories, people bribe the Grim Reaper to postpone its visit.

In some other beliefs, the image of Death appearing before people serves as a guide to lead the way to the afterlife.

The Grim Reaper traditionally wears a black or white robe and caries a scythe.

Dreams about the Grim Reaper meaning

Death is a common dream symbol, and it sometimes appears in the form of the Grim Reaper. These dreams are considered nightmares and have a very disturbing effect on the dreamer.

These dreams often reveal the person’s creativity and proneness to live in a fantasy world. Sometimes this dream could be a reflection of a horror movie the person has seen recently, or it could depict the person’s fear of death or dying.

The person might also have had a recent encounter with death and the dream is a consequence of that experience.

These dreams are usually not a good dream omen, and are often a sign that represents a warning to the dreamer.

It might be a sign of some negative characteristics of the person that the person tries to hide or ignore. They represent something the person is aware of the need to get rid of, but is possibly afraid to do that.

The dream is often a message to become aware of these aspects of your personality and decide whether you want them to continue being a part of you.

The Grim Reaper appears in our dreams to symbolize a change or the ending of some important phase in our lives. 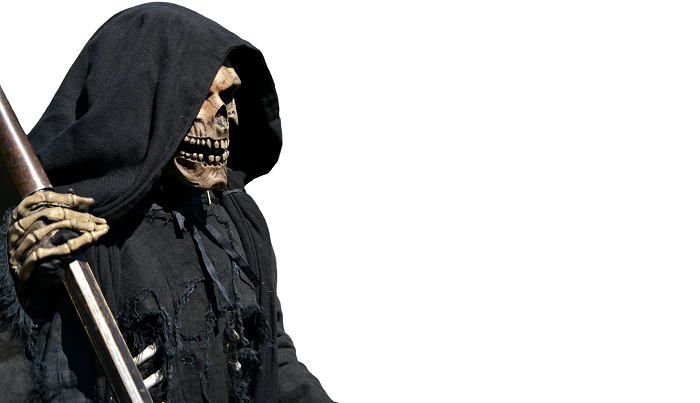 The Grim Reaper in your dream often symbolizes the end of something in your life (symbolic death) and the need to accept that fact. Maybe you need to part your ways with a good friend or give up on something important.

Sometimes the dream symbolizes the end of a relationship. Sometimes it is a sign that the person needs to let go of some memories from the past.

Dreams about the Grim Reaper are common dreams during major life changes and endings of some kind, such as changing jobs, moving to a new place of residence, ending a relationship and entering a new one, etc.

This figure often describes the difficulties we have to accept new things and changes in our lives, even though these changes are beneficial for our lives.

In some cases, the Grim Reaper symbolizes your attempts to resolve some issues within which are the cause of anger and anxiety you feel. Usually its appearance is not a sign of death, and its presence is mostly symbolical.

Often, this scary figure appears in our dreams revealing our fear of the moment of death and our imagination is figuring out how it might look like in real life. It is often a sign of the fear of the unknown.

Death and the Grim Reaper often appears in the dreams of older people, who are confronting and getting used to the idea of dying and leaving this world.

Possible scenarios of dreams about the Grim Reaper

Death is never a friendly companion, and its presence in your dream is not a good sign, and usually symbolizes difficulties, mostly with your health.

Dreaming of being spared by the Grim Reaper – If you dreamed of the Grim Reaper visiting you, but sparing your life, that is a sign of successfully overcoming some health issues.

Being spared by the Grim Reaper could be a sign of some health worries, which you will fortunately go through without significant consequences.

Maybe someone is trying of interfere in some life decisions you should make and you consider this threatening.

Dreaming of not fearing the Grim Reaper – If you dreamed of seeing the Grim Reaper and not being afraid of it, the dream is a good sign. It is usually a sign of successfully overcoming the obstacles that are coming your way. It is a sign of achievements and prosperity.

Dreaming of being afraid of the Grim Reaper – If you dreamed of seeing the Grim Reaper and being very afraid, the dream is usually a sign of stagnation. It is probably a sign that your success will be delayed or you won’t succeed in some of your endeavors.

Maybe this dream indicates being determined to succeed in some endeavor and finally managing it.

Maybe you are burdened by some wrongdoing to someone and you desperately want to compensate to that person.

Dreaming of the Grim Reaper is coming and bringing you death – If you dreamed of observing the Grim Reaper approaching to you and being aware that it brings you death, that dream is a warning sign.

You should stop worrying about some things and try to think more optimistically because you will end up attracting the unwanted outcome.

This dream often indicates some of your fears and warns you to get rid of them, or you might end up manifesting them into your reality.

It could also mean successfully dealing with some people who are an obstacle to your success, sometimes even your business partners.

Dreaming of talking to the Grim Reaper – If you dreamed of having a conversation with the Grim Reaper, the dream often indicates being able to find an agreement with a person who is hostile to you.

Maybe the dream could indicate encountering people you won’t like at first glance.

In some cases, the dream of talking to a Grim Reaper could indicate some intense business encounters and conversations.

Your tendencies are bothering these people and you might find yourself in a situation where they could begin avoiding your presence to avoid your controlling influence.

Maybe your partner whom you trust is trying to make some moves to deprive you of some profit or rights and you won’t be aware of that until it happens.

The Grim Reaper laughing in your dream is usually a sign of deceit you will experience and the perpetrator will escape unpunished.

Greeting the Grim Reaper in a dream could also be a sign of making your romantic partner happy with some lovely gesture to express your love and devotion.

Sometimes the dream of kissing the hand of the Grim Reaper is a sign of inheriting some valuable property and needing to travel somewhere to take over the inheritance.