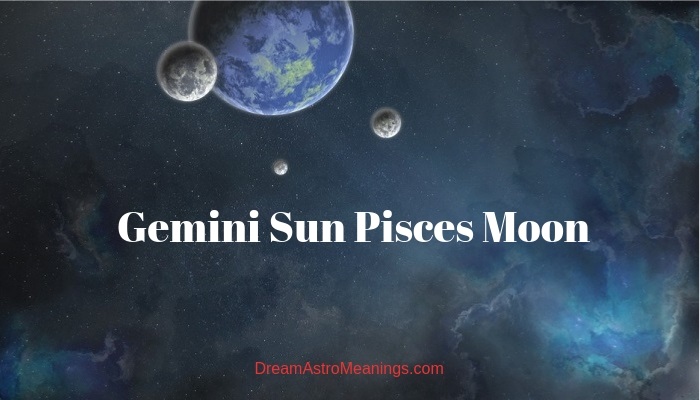 People with sun in Gemini and moon in Pisces are an air/water element combination of character.

These people are very adaptable and usually relaxed and easy going. They are emotional but that is not easily seen by ordinary observers.

To the public these people appear a bit superficial and not very interested in forming closer bonds with people. They are usually perceived as airy and prone to hanging around different people without deeper involvement.

The truth is that these people usually behave in such a manner with people they don’t know well.

These people can be very absentminded and only appear to be listening. That usually happens when the topic isn’t interesting and they have more important things to think about.

They are very intelligent and they combine their intelligence with their intuition to make the right decisions and actions.

In some cases, they are prone to disillusioning themselves and refusing to deal with the reality and the issues they have.

They could be prone to postponing actions in some situations, hoping that their problems will disappear and only making them worse. They need to train themselves to deal with their issues the moment they appear and not ignoring them in the hope that they will somehow resolve on their own.

These people are very smart and have innovative ways of solving practical problems. They are also very curious and love to learn new things.

They have a wide range of interests. They are sociable and loners at the same time. They love being around people but they don’t relax easily and prefer to stay aside and not be in the center of attention.

In some cases, these people can be very shy; having problems with making the initial contact with people and getting to know them.

Many of these people love to spend their time at home in their own company doing things which please them.

They are not very ambitious but they desire to be well-paid for the work they do. They don’t allow being mistreated and will find a way to avoid their duties without getting noticed if they realize that their work isn’t being appreciated enough.

They are hard workers, but they could also turn into great procrastinators in an instant.

They love traveling and they usually travel often, preferably to faraway countries. They love the experience of new things and getting acquainted with a new culture and their people.

They are usually communicative but can be incredibly silent and refuse to speak much.

They have good relationships with people they know and people have a good opinion about them, but they seriously devote themselves only to their family members and lifelong friends.

When someone offends them, they might not say a thing, but they will remember that and tend to avoid that person in the future. Although they are often superficial these people are never mean and would never do anything to harm anyone.

They even don’t have a typical Gemini directness and they try to control their words so not to offend anyone; that is why when someone offends them, they find it very hard to accept and forgive that person.

These people usually have good luck and their endeavors are successful. They usually don’t have much talent for making money and investments, but they are fortunate enough to earn well from their profession.

They are not spendthrifts and they don’t like buying stuff. They usually do it when they need something and rarely because they enjoy shopping.

They are sensitive and very emotional, but have a guarded attitude towards people which wards them off against trying to hurt them.

If someone hurts them these people can become very sarcastic and incredibly direct in their communication to that person, saying things to insult them and get even with them.

They are very adaptable and enjoy making changes. New situations and circumstances make them happy and inspire them.

They often end up living in a different country than their country of birth.

The good traits of Sun in Gemini and Moon in Pisces:

The bad traits of Sun in Gemini and Moon in Pisces:

People with sun in Gemini and moon in Pisces are usually romantic and rational at the same time. They are attracted to the person’s emotional and intellectual qualities.

Their ideal romantic partner and future spouse should be very smart and impress them with their intelligence and talk, but they also to be very sensitive and able to demonstrate their affection towards them.

They are easy going and relaxed when it comes to relationships and can be prone to changing partners, but in general, these people prefer some kind of formal commitment and being exclusive.

Their partner needs to be someone reliable and confident, someone who can be able to provide for them and their family alongside with this person.

They don’t reveal their emotions easily. They can hide their love and feelings for some person for a long time, enjoying the illusion and imagining them being together.

Some of them are prone to self-deception and imagining relationships which are not likely to ever happen; that is why they need self-assess their feelings and thoughts occasionally to make sure that they are not on the wrong path, deceiving themselves with a person who is not a match for them.

In some cases, with especially bad aspected Neptune and Mercury, these people could be a target of people and partners who might try to manipulate them and use them.

They might experience relationship disappointments and betrayals and carry heavy emotional traumas from these past hurts.

They should prevent these situations from happening by paying attention to the qualities of their potential partners and taking some time before committing to them.

They should get to know their potential partners better and only then decide whether they want to be in a committed relationship or marriage with them.

They can be good partners and spouses if they are rightly directed by their partners.

They usually don’t have much organizational capacity and they give over the organization and leadership in the relationship to their partners; that is why, it is important for these people to have a partner who is very stable and capable of leading and organizing their mutual life.

When they are told what to do, they usually perform their duties correctly, although sometimes they might be prone to forgetting them or omitting to hear them because of their absentmindedness.

These traits are something their partners and spouses need to get used to because it is not likely that they will change them, and they don’t have a bad intention underneath.

They are usually good parents, although they can be a bit compliant towards their children, letting them do whatever they desire.

They love their kids and enjoy spending time with them, but are too sensitive and have a problem with being strict and severe towards them even if they are aware that it is for their own good.

They try to instill in their kids a will to learn and gather new experiences, as well as to be good observers of their surroundings just as they are.

Although it might seem strange, these people tend to stay in their relationships and marriages for a long time, sometimes for life.

They love experimenting and gaining new experiences, but when they find a person who matches them and their criteria, they don’t want to take a chance in losing them because of some superficial fling which doesn’t mean a thing.

They are tender and gentle beings, and not very passionate. They prefer kissing and hugging to passionate intimate encounters with their partners or spouses.

The best match for a person born with Gemini sun and Pisces moon is another air sign, with the influence of water element in their chart.

They could also be alright with a partner who is a water sign with some air and fire element.

Earth signs could also be an option if there is some influence of other elements and compromises.

In fact, these people could easily get along with all elements because they are very adaptable and prone to making changes.

People with sun in Gemini and moon in Pisces are both open-minded and reserved.

They are very adaptable and usually easy to get along. They are very intelligent and communicative but sometimes could have an issue with making a move and establishing contacts with other people.

They are often blessed with good fortune which enables the success of their endeavors.

These people are not ambitious but usually manage to accomplish all their goals and be financially rewarded.

They can be prone to dating multiple people but in general they prefer settling down with the partner who best matches their criteria.

They are not very responsible and reliable, and can be prone to laziness and procrastination.

They make good spouses but need some encouragement and reminding, to do their choirs correctly. They can be forgetful and absentminded but that is a trait of their character.

Their ideal partner is someone reliable and confident; someone they could depend upon to provide for their family and life together alongside them.

They are attracted by their partners’ intelligence and emotional side, more than with their looks.

They make good parents but can be prone to be overly complaisant towards their children and allowing them to do whatever they please.