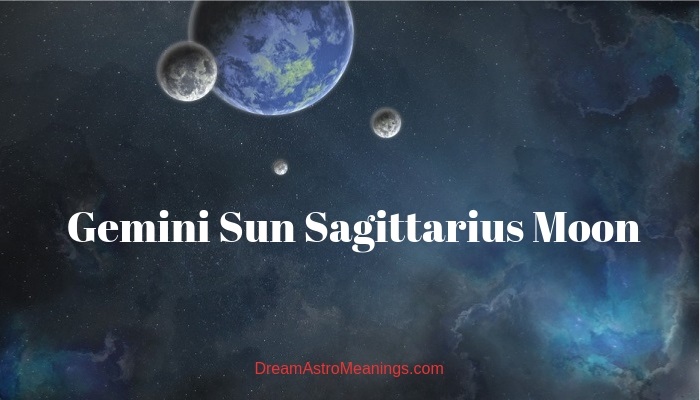 The Sun is our rational nature while the Moon is our subconscious. Most people have the opportunity to see only our Sun side of personality, while the Moon side is revealed only to the people who are closest.

People who have Sun in Gemini and Moon in Sagittarius are easy going and relaxed.

They are a joy to be around but some people could consider them superficial and unreliable. They often have these traits, to be honest.

The thing about these people is that they love entertainment and love having fun in life.

These people try to always look at the brighter side of a situation and don’t let circumstances get to them. They try to be positive and always believe in the best outcome of situations.

These people seem to always have a smile on their face. It is not that they are could not be serious or responsible; it is just that their nature doesn’t allow them to appear and behave depressed and discouraged.

They don’t want any kind of negativity in their lives and they tend to ignore and avoid people who exhibit such traits. They make a happy atmosphere wherever they appear.

People love being around them because they make them feel optimistic and joyful about their presence as well as their future.

People with this Sun/Moon combination are very communicative and talking is one of their favorite activities. Traveling is other one of their loves in life.

These people have a talent for expressing themselves in a way that makes people interested in what they have to say. They are great storytellers and have a lot of stories to tell from their own experiences.

They also have a talent for writing, and often become professional writers or journalists. They often write about their travels and experiences with different cultures.

These people love being surrounded by people. They could communicate with almost anyone. They have a bit of knowledge on a variety of subjects and can easily start a conversation.

They don’t have a problem approaching people and making contacts. Their social networks are crowded with contacts.

They also meet a lot of people on their frequent travels. These people travel a lot.

If they are not somewhere on a journey, they are probably planning their next trip. They travel both to close distances as well as to faraway places.

They also have a lot of friends who live abroad and they often travel to visit them.

These people don’t like to be at home for a long time. Some of these people use their houses as places to spend the night. Some of them don’t own their place but frequently move from place to place, or country to country.

They are social types and being alone makes them nervous. They love action and new things happening all the time. They cannot stand stagnation of any kind.

Their independence and freedom are of the utmost importance for these people. They can’t stand any restrictions and control.

When they feel pressured, they get the urge to escape and it is not wise putting these people under any kind of pressure. When they feel relaxed, and feel that they can choose whether to stay or go, their usual decision is to stay.

They are very active and energetic. It appears that they are always in some kind of movement. They are often the initiators of different gatherings and do a good job at doing so.

These people are not very organized. They also have selective memory and tend to forget the things and information they don’t find useful or interesting. They can also be absentminded and focused on their thoughts while something else is going on around them.

These traits often cause problems in their relations with other people who reproach them for behaving in such a manner.

In some cases, these people might be prone to avoiding speaking the truth or lying.

That usually happens when the rulers of their sun and moon, Mercury and Jupiter make bad aspects with Neptune which causes these people to be prone to deception and mental manipulation.

The good traits of Sun in Gemini and Moon in Sagittarius:

The bad traits of Sun in Gemini and Moon in Sagittarius:

When it comes to love, people with Sun in Gemini and Moon in Sagittarius are relaxed and easy going.

They are not very bothered by the subjects of fidelity and tradition.

Many of these people don’t like to be in a formalized relationship such as marriage because they don’t like to give up on their freedom status.

Some of them don’t like any kind of commitment either, and prefer staying in open type relationships with partners who have similar views on partnerships as they do.

Freedom is very important for these people as well as their independence. They don’t like being controlled by anyone or any circumstance.

When they sense that someone is becoming needy and overly attached to them, many of these people begin feeling suffocated and desire to end that relationship or at least distance themselves for a while.

These people are usually not commitment types and love to stay in an open type of relationship as long as possible.

The reason is their mentioned love for freedom and feeling that they could walk away at any moment if something begins bothering them.

This approach is not accepted and tolerated by anyone and many of their partners when they realize that they will most likely never decide to commit to them decide to end the relationship.

That is why they need a partner who is like them, relaxed and easy going.

They need someone who is open to possibilities and experimenting. They can be prone to changing partners frequently because they enjoy expanding their experience, and they love the variety.

It is not that these people cannot be faithful. If they have an influence of some other sign that is more stable and has a more down to earth approach to relationships and being with one person, they might.

One thing that they cannot tolerate in a relationship is a person who is overly critical, nagging all the time, and tries to control them.

This person won’t last a day in their company. They don’t allow anyone to treat them in such a way.

They choose to commit when they find a partner that matches their desires and criteria.

When that happens they could become loyal and devoted to that person. Their marriage could be lasting and they are willing to put in the effort when they are truly in love with their spouse.

They probably won’t be the most reliable husband or wife, but there certainly won’t lack fun and joy in their marriage. They will make sure that both they and their spouse have enough fun and entertainment, and laughter.

As parents they could be very tolerant towards their children, letting them do whatever they want, and could even spoil them.

They usually don’t have authority with their children and they consider them more of a friend than as their parent whose words are meant to be listened to.

These people are not very passionate, and are more attracted to a person’s intellect and wit, as well as what that person has to say, than the way the person looks like. They love adventures and they love experiencing them in the company of their beloved.

It would have to be someone who inspires them and helps them learn new things.

Their ideal matches are another air or fire signs. Earth and water signs are overly emotional and not active enough for these people.

People with Sun in Gemini and Moon in Sagittarius are flexible, easy going, open, relaxed, fun, and optimistic people.

They try not to be bothered by negative and upsetting information as well as people who bring negative energy into their lives. They try to look at things and situations from a positive perspective and always expect the best.

They are active and very energetic. These people are also very sociable and communicative. They love being around people and meeting new acquaintances.

These people love to express themselves in different forms because they are very creative, but they prefer talking and writing.

They love to talk very much and easily start conversations with different people.

They have a bit of information on different subjects and it makes them easy to begin talking with people from different social backgrounds. They have a large social network made of their friends and acquaintances.

These people love to express their thoughts, beliefs, and feelings through written words as well. They often choose the profession of a writer or journalist.

They also love traveling and they travel a lot, both on short distances as well as far away.

They are not very faithful and love their freedom very much. They are allergic to people’s attempts to control them or limit them in some other way.

They are not easy to commit and prefer open relationships. They commit only when they are sure that it is the right partner and when they are very much in love with them.

These people are not very responsible and reliable. They tend to forget things and be absentminded. They are not very emotional and are more attracted to the intellectual qualities of a partner rather than their looks.