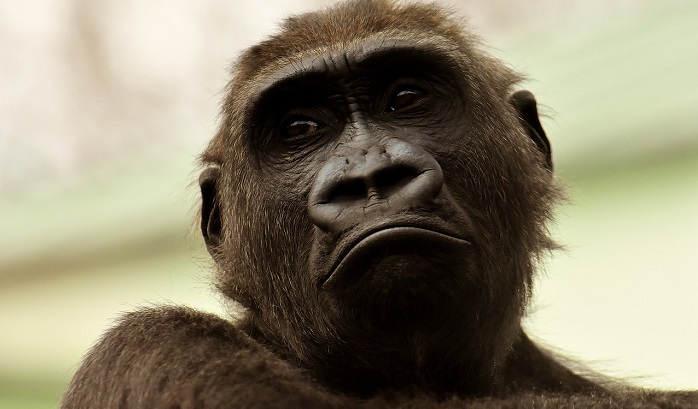 Gorillas are mainly herbivorous apes, living in the forests of central Sub-Saharan Africa.

Gorillas are the world’s largest known existing primate. The interesting fact is that the DNA of the gorillas is similar to humans’. They are our close relatives, just like the bonobo monkeys and the chimpanzees. We evolved from a common ancestor around 7 million years ago.

Gorillas inhabit different habitats, from marches, mountains, dense forests, and swamps. Mountain gorillas have thicker hair and are darkest of all of the gorillas.

These gorillas are usually referred to as silverbacks. They are usually older than 12 years, and have large canine teeth.

Gorillas build nests for daily and nighttime use. They build them from branches and leaves and they range 1.52m in diameter. They build them on the ground and sleep there, unlike most monkeys.

These animals are very organized. Their day consists of periods of travel and feeding, and resting in between. They move on average 500m per day in their search for food. They have different diet, depending on the habitat where they live. They eat leaves, fruits, insects like termites and ants, etc.

Gorillas don’t need much water because of their food rich with water.

They live in groups of individuals called troops. These communities usually consist of one adult male, several adult females and their offspring. Some troops have multiple males as well. They often leave their natal troops and transfer to other groups.

Males do that usually to establish their own troop and attract the females in. Males can also stay in their natal troop where they become subordinate to the silverback.

After the death of the silverback they can fight with the other males in the troop to become the dominant male or to mate with the females. When a silverback in a single male troop dies, the females and their offspring usually find new troops to join them. The young ones are often victims of infanticide. 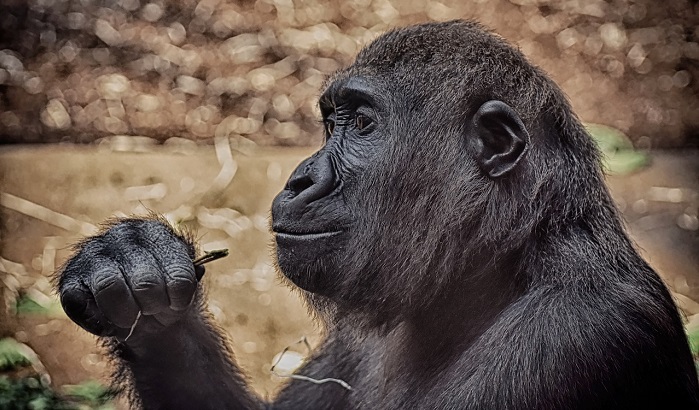 These are highly organized groups with the silverback as the head, making all the decisions about the rest of the members. The silverbacks decide when they move, where they move, leading others to the feeding sites, etc.

They also take care of their safety. Younger males which are subordinate to the silverback are his backup. They are called blackbacks, and are between 8 and 12 years old.

Silverbacks establish strong bonds with their females. The bonds are formed by grooming and being close to each other. Females need the protection of the males from predators and they need protection for their young as well. Fights between males and females sometimes occur.

Females usually react aggressively towards other females. They often fight to gain access to males. Females with offspring have closer associations. Male gorillas don’t form strong bonds, and they are usually competitive and fight each other to gain the right to mate.

If they live in all male communities, they form friendly bonds, groom each other, and sometimes have homosexual interactions. When gorillas from other troops meet they can engage in a severely aggressive fight which usually finishes with the death of one of the fighters.

Gorillas don’t have many real enemies. One of them is the leopard. If the group of gorillas is attacked, the silverback will defend its members till its death.

Gorillas have flirting rituals. Females try to attract the males’ attention. Pregnancy lasts around 8.5 months. The infants are very vulnerable and dependent on their mothers.

Mothers do all the nurturing and they need to ensure that their babies are protected. The males don’t have a role in raising and caring for their young. The silverback protects them from aggressive attacks within the group.

The mothers tend to stay near the silverback to ensure the protection of their young. The infants sleep with their mothers in the nest.

After five months the young begin breaking the contact with their mothers, gradually increasing the distance between them. The mothers breastfeed their young for years, and after their young are weaned they can become pregnant again.

Gorillas have many different vocalizations, such as grunts, roars, barks, screams, belches, etc.

Their lifespan is around 40 years and gorillas in captivity tend to live longer.

All species of gorillas are considered highly endangered. They are jeopardized by the loss of their habitat, poaching, and trade of their meat.

What does a Gorilla Symbolize?

A gorilla is a wake-up call to recognize our own value and strength. It is a symbol of nobility and dignity as well as royal demeanor.

The gorilla appearing in our lives could be a sign that we might soon be called to take over some leadership role and ask us to be prepared for that.

The gorilla is asking us to trust our abilities to lead others to put in their efforts into achieving a common goal.

The Gorilla Meaning as a Spirit Animal

The gorilla totem can have many different meanings. Here are some of them:

Leadership. The leading male in the group of gorillas is the silverback. It leads the troop and organizes its activities. The silverback is the one everyone in the group listens to. The gorilla spirit animal gives you this gift as well. You are a born leader and you are not afraid to make some important decisions regarding others. You are also ready to take the blame and consequences if they turn out to be bad ones.

Community. Gorillas live in organized communities. The gorilla spirit animal is teaching you of the need to respect your community and its members. It is also a reminder to help whenever some of your community members need help. Help it grow and become stronger for the benefit of all its members.

Hierarchy. There is strict hierarchy in a gorillas group, with the silverback as the chief commander. The gorilla totem is reminding you of the importance of hierarchy in every system and organization, regardless of its size and is asking you to respect the hierarchy you are a part of.

Protectiveness. Gorillas are very protective of the members of its group. He is willing to put its life at risk to defend them. The gorilla totem animal is teaching you of the importance of being protective of the people and things you care about. If the gorilla is your totem, you most likely have this trait already.

Gorilla as Your Totem Animal

People with the gorilla as their totem, are leader types. They have a strong willpower which helps them lead groups of people towards their goals. They are decisive and confident.

They think fast and don’t hesitate to make decisions concerning important matters and large groups of people. They take full responsibility for their actions.

They have a caring and protective nature. They always protect the members of their group, and even put themselves in risk while doing so. They can’t stand someone being bullied and harassed in their vicinity and immediately interfere to help.

These people are not aggressive and conflict types. Quite the opposite, they always try to resolve issues by compromise, talk and mediation. They know their responsibilities and are very good in fulfilling them.

Their honesty, integrity, gentle, generous and helping nature instills confidence in others and they are happy to be led by these magnetic people. They are proud and honored to follow their lead.

With the gorilla guiding you, you are a leader who is moderate, compassionate, balanced and understanding. You are wise and always try to settle differences and potential problems with talk and mediation, instead of with aggression.

You are slowly but surely moving towards your goals, and you have some faithful supporters in the form of your friends and family members along the way. This totem animal is asking you to stand firm on the ground and perform your duties.

Gorilla people are usually very successful and able to accomplish whatever they desire.

What if the Gorilla Appears in Your Life?

If the gorilla appears in your life, that is a very important message from the Universe.

This spirit animal is possibly asking you to take on a more active role in your life, or take a leadership role in some situation.

The gorilla could also be a reminder to step into the role of a protector of your family or other people you care about in your life.

When to call on Gorilla?

You should call on gorilla as your spirit animal when:

Dreams about Gorilla – Interpretation and Meaning

If you see a gorilla in your dream, that could indicate not being adapted to some circumstances or being too stiff. It could also indicate your primitive urges, repressed sexuality or wild and untamed nature.

This dream could also be a calling from your subconscious to take action in some situation.

You can’t wait for things to fall into your lap. You need to take some action and give initiative for things to begin unfolding in your direction.

The gorilla is asking you to embrace your strength and other qualities. Don’t be afraid to stand up for yourself and the ones you care about.