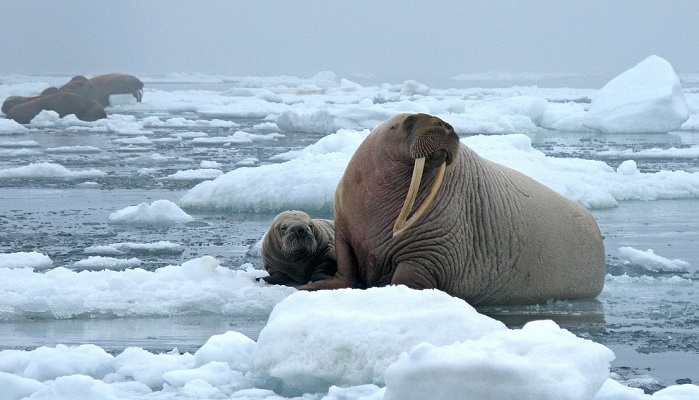 The walrus is a large marine mammal, which lives in cold climates. They are easily recognized by their big tusks, their whiskers and their massive bulk.

Adult male walruses can reach more than two tons in weight. They live in shallow waters and spend most of their time on the sea ice.

They live relatively long (up to 30 years in the wild), and are social animals. During the 19th and the 20th century, walruses were hunted for their meat, blubber and their tusks. That caused the drastic drop in population in the Arctic region.

There is a difference in size and other characteristics between the Pacific and the Atlantic walruses. Males are bigger than females. Newborns are large, weighing up to 85kg and being up to 1.4m long.

Walruses weigh much because of the massive blubber they have underneath their skin which actually keeps them warm and provides them with energy. The blubber is up to 15cm thick.

Walruses resemble in shape to sea lions and seals. Their most prominent characteristic is their long tusks. Both males and females possess them. They can reach a length of up to 1m and can weigh more than 5kg.

Males usually have bigger tusks than females because they use them in their fights to prove their dominance. The males with the biggest tusks are usually the ones who are dominant in the group.

Besides for defense purposes, walruses use their tusks for making holes in the ice or climbing out of the water.

They don’t have much fur on their skin and they appear bald. Their skin is also very wrinkled and thick, especially around the neck and the shoulders of males.

The mature walruses skin is pale nearly pink, while the young ones have a deep brown color, which pales as they grow older.

Their calves are born during the period of spring migration which occurs from April to June.

They can swim instantaneously. They are nursed by their mothers around a year, but they sometimes spend several years with their mothers. 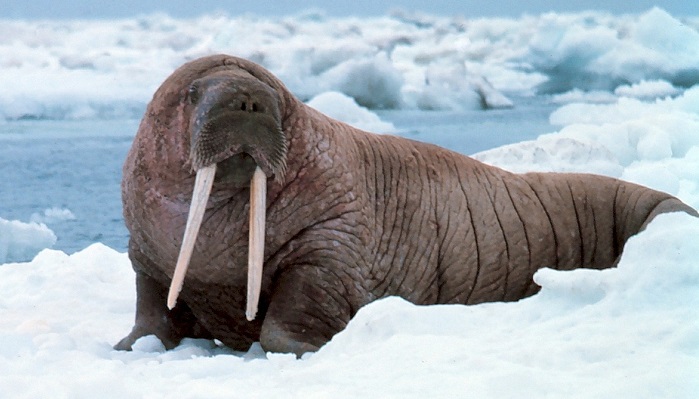 They are not good at diving and spend most of their time in shallow waters and icebergs around. There they find their food. They feed on shrimps, crabs, corals, sea cucumbers, molluscs, etc. Walruses cannot spend much time underwater.

They don’t have many natural predators because of their massive size and large tusks. They are preyed upon by the polar bear and the killer whales, but these two mostly prey on their calves.

They hesitate to attack an adult walrus because that poses a major threat.

The walrus can cause deadly injuries to the polar bear and these attacks can end up fatally for the bear as well.

The same goes for the killer whales that can also be injured by the deadly weapons that the walruses possess.

What does the Walrus Symbolize?

Walruses live in colder climates and their symbolism mostly derives from the cultures of the Arctic people.

The Meanings of Walrus as a Spirit Animal

The Walrus spirit animal has many different meanings. Some of them are:

Courage. Walruses are animals with few natural predators, and even those sometimes fall victim to this powerful animal and its tusks. The walrus totem is teaching you to be brave and never underestimate the power of your abilities even when you are confronted with a much stronger enemy.

Community and sociability. Walruses are animals which live in large colonies. They teach us of the importance of being a part of your community and socializing with others. If you have a walrus as your totem, you are most likely a sociable person, always in the company of friends and acquaintances.

Motherhood. Walrus females are good mothers. Their young spend several years in their vicinity before they become independent. With this totem animal you are also a good parent who takes good care of your children.

Walrus as Your Totem Animal

If a walrus is your totem animal, you are a powerful person with strong stamina.

You are brave and determined to defend what is yours. You are sociable and enjoy spending time with acquaintances and members of your close community.

You are a good parent and know how to take care of your loved ones. You can be prone to moving places in search for better living conditions.

You are very intelligent and have a good sense of humor.

What if the Walrus Appears in Your Life?

The walrus appears in your life to remind you to spend time with someone you care about. It is asking you to reorganize better so you can devote more of your time to the people who deserve that from you.

Sometimes a walrus appears to encourage you to socialize more, and open up to people. The walrus can also appear when you are on the lookout to become a part of a group of people with similar interests.

When the walrus appears, you might be challenged by a much more powerful force than yourself, but you will fortunately overcome that challenge.

This animal could also indicate some gatherings you could soon attend or taking a trip somewhere distant. It could announce some interesting events awaiting you.

When to call on Walrus?

You should call on walrus totem when:

Dreams about Walrus – Interpretation and Meaning

If a walrus appears in your dream, you should pay attention to the details, because it might be bringing you some important messages.

The walrus could be an indication of the need to protect something or someone or becoming a leader in some situation in your life.

Maybe you will be forced to confront something or someone who outreaches your power, but you will be able to overcome that situation using your natural intelligence and other abilities.