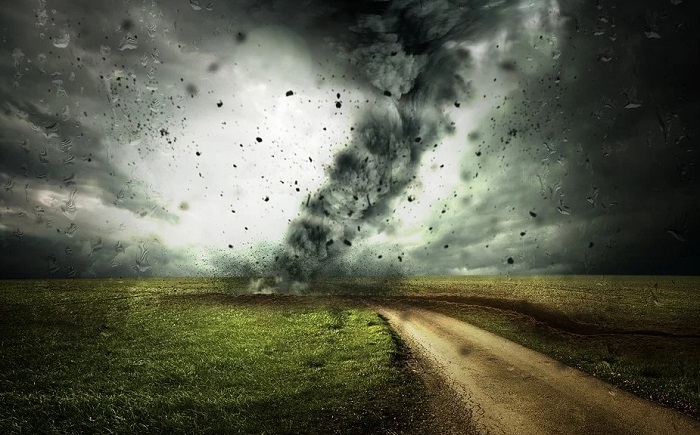 One of the oldest geometric shapes that appear in many cultures and an indispensable element of modern beliefs is the spiral.

The spiral is a primary symbol dating back to the Neolithic era and is carved into rocks worldwide.

It is a symbol for great concepts such as evolution, life, consciousness, creation, and animals such as snails, shells, and natural phenomena such as vortices, hurricanes, tornadoes, and galaxies.

As such, it can appear as a dream motive, and we might say a mighty one – dreams that have any of these motives like vortices, hurricanes, tornadoes, and galaxies are prevalent.

Their meaning is powerful, and such motives also commonly appear in the Bible.

Here, we want to look into one symbol more concretely – Hurricane.

What does it mean to have a dream about it? Read here.

Dreaming of a Hurricane is not a pleasant dream at all – all of us who had it can say it. It is rarely a pleasant experience, or the pleasant part comes when you wake up and realize that it was just a bad dream.

But it can have both positive and negative meanings. Of course, depending on how we dreamed of it, and just because the dream was unpleasant and scary, it does not mean that it will have a bad meaning.

If you dreamed that a Hurricane was forming above you, it could mean that the higher entities are trying to speak to you and that you have done something to make them mad.

In some cases, according to Biblical symbolism, it is the way to get your attention, to hear the news from the above.

Let that idea mature in you, and don’t tell anyone about it to disturb your flow of thought.

If you dreamed of seeing a Hurricane in the distance, it could mean that you will be watching from afar as your enemies destroy each other.

If you dream of seeing from afar a Hurricane destroying everything in front of you, it may mean that you will be able to avoid the consequences of something for which you were responsible. You need to think of your life and all that you have done, never walking away from the consequences of any actions.

Dreaming of being around a Hurricane, in another version of this interesting dream, can mean that you are or will understand the core of a problem that has been bothering you for a long time and will soon solve it.

It is like an epiphany, that just some voice inside you and you do not know where it came from; this is another Biblical version of this dream.

To dream that a Hurricane has developed a tornado means that you are pulling tails from the past – all those things you have not resolved yet, are now returning to you very fast. You will have to solve some things first before you can move on calmly. These can be old debts that are not big, but you often think about getting rid of that burden.

To dream of a hurricane over the ocean means that a situation you thought was extremely serious is harmless, and you can relax in the coming period. Everything will be solved without excessive effort.

Another version of a dream about the Hurricane is the one in which you see it causing a flood, and such a dream suggests that you should take care of your health in the coming months. In numerous cases, seeing water is not a good sign in dreams.

To dream that a Hurricane carries a flock of sheep through the sky means that you will suffer some damage in the coming days.

If you have dreamed that a Hurricane uproots trees, it may mean that in the coming period, you will make an important decision that you have been hesitating about for a long time.

In a version of a dream where you see a Hurricane disappearing in front of your eyes, such a dream suggests that you will be able to get out of the current situation as a winner. You have probably been solving a situation for a long time that took a lot of your energy, but it will soon come to an end, and you will be able to take a break from it.

If you dreamed that a hurricane was carrying big trees, it means that the business venture you started will most likely fail through someone else’s fault. It is not your mistake, but in any case, it is something that will cause you a lot of trouble. You will not recover from the crash for a long time, but as every Hurricane must calm down in the end, it will get better after this.

Just be patient and don’t let this storm discourage you.

Decoding the Dream about Hurricane

Now, in the process of decoding this dream, and aligning it with the Holy Book, there is numerous versions to speak of, and each of them is much more personal than the other.

Being the case, you discover another layer of the dream itself.

For example, it is the case where you see a Hurricane bringing your home down, destroying it to the ground, which means that you will soon be resolving the housing issue that has put you under considerable strain in recent years.

If you dreamed that a Hurricane lifts you and carries you in the air (this version of a dream is very common), it means that you are too relaxed in life.

Be a bit more careful, or some carefree events will take you somewhere you do not want to be. This is the dream where it is shown that you are one of those people who don’t care what they do and what they do. You expect other people to solve your life issue, and it is only a matter of time before they will give up on you in an attempt to get themselves in order.

Try to work a little harder on your own in certain spheres of life so that people will appreciate you more.

Here is one more version of a dream about the Hurricane – the one where it is carrying the roof off your house may mean that you will be robbed in some future period.

It would not be bad to take more account of the safety of your home. Buy a dog that can guard you or install one of the security systems that always come in handy and make the man feel far safer.

To dream that you have heard on television or the radio that a Hurricane has been announced means that you will receive disturbing news by mail or telephone.

Be prepared and do not panic in any cases – relax, you cannot change what is about to come, but you can alter your reaction.

If you dreamed of a Hurricane that is full of thunder, it means that a period full of turbulence is ahead of you. You will probably quarrel with some of your close friends or even friends.

You will find yourself misunderstood for some of your actions that you consider justified. A similar case is in the version of a dream where you see the Hurricane causing huge waves means that the coming period will be unfavorable for you.

Maybe it wouldn’t be bad to keep quiet for a while and not make important business decisions or those related to a love plan.

Sometimes, it is better to wait for the storm to calm down than swim in the waves and take risks.

Now, when we put all of this in the Biblical perspective, we can see that the Holy Book writes that God at times allows some natural disasters to condemn the sin people have made. Do you have some sins, so that you had such a dream?

The very interesting motive in dreams, would you agree? The most important thing is not to be scared of its meaning and taking the given advice with all of your power because this dream carries a lot of guidance for the person who has this dream.

According to the Bible, and so many people ask this – why this dream?

The holy Book writes that in the same way evil is possible on the Earth, in the same way, there are natural things that occur as a condemned of sin, just like a Hurricane. And since you had this dream, you may have done something bad, sinful even.

When you see yourself in the center of a Hurricane above which you see a blue sky can be interpreted to mean that you will finally be able to find the peace you have so longed for.

To dream that a Hurricane is starting to flare up even more, may mean that a situation in which you will find yourself will escalate into a physical conflict.

Try to avoid it at all costs, because violence is always the last option you need – it is the advice you must take in all situations.

To dream that a Hurricane emits a large amount of precipitation means that some news may make you sad in the coming period.

In some cases, this dream means that someone’s dangerous disease will recede and emerge victorious from a long battle with a not-so-good outcome.

It can also mean that you will break off some old relationships and stop worrying about them.

If you dreamed that a Hurricane destroyed your house or property or anything material, it means that next year will be very favorable and fruitful for you.

It is an ideal time to expand your business if you are engaged in agriculture or farming because this kind of dream, although unpleasant in itself, actually means the exact opposite.

To dream that you have found yourself in the middle of a Hurricane and that it has taken you unharmed far from where you were can be interpreted as being a person who is very easy to cope with any given task. Anything that comes to you is not an issue.

No matter how complicated it may be for other people, you are simply born under such a star that you have the talent to cope with everything. Use it wisely, and help others to cope with all things that cause them trouble.