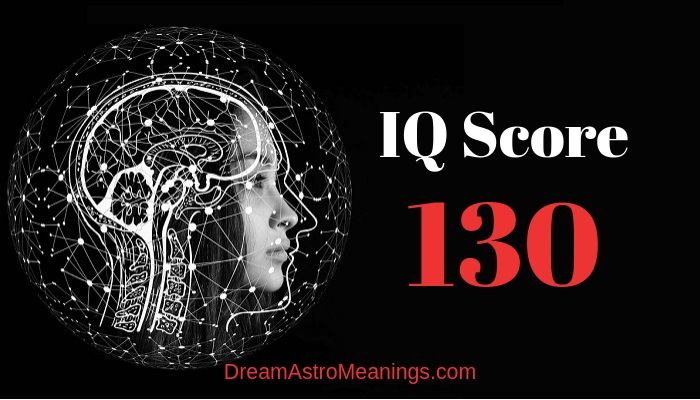 What is IQ or Intelligence Quotient and how is it being calculated?

Surely, you have heard many times that someone was a genius or that his or her IQ was above the average. Have you ever wondered what it actually means?

Finally, have you ever got your own IQ tested? Today we will talk about a quite extraordinary IQ score, that of 130.

Before that, we will explain what the intelligence Quotient represents, how it is calculated, what scores can one get and what each score means.

Long before modern IQ testing was established, people were interested into human intelligence and there were other attempts of trying to classify it.

It was not until the early twentieth century that Intelligence Quotient tests have been made.

The history of what we know as IQ test begins with Alfred Binet, the French psychologists who made first tests in order to measure students’ intelligence.

In the early twentieth century, the French government passed the law according to which it was required that all children attend school. They wanted to identify those who were likely to need more assistance during their educational years.

The government asked of Binet to invent a system that would help with this identification.

In order to find the best solution, Binet and his colleague started creating tests that included parameters not closely associated with school education per se.

They focused on selecting appropriate questions that would help identify levels of attention, problem solving abilities and memory. Binet hoped to find the best way to identify the predictor of educational success.

Once applied, Binet found out how some kids were quicker and more skillful in answering certain questions compared to their older schoolmates and the other way around. Binet concluded that the factor of age groups; he proposed the mental age concept of determining intelligence.

According to the French psychologist, human intelligence represents an enormously wide palette of characteristics, so it was virtually impossible that a single factor could measure it.

Binet believed that human intelligence is shaped up and consisted of numerous factors and that it is affected by outer circumstances; he suggested that the level of intelligence could be accurately compared in children that come from the same background.

Binet-Simon test was introduced into the USA where it gained a lot of interest.

Once introduced into USA, Binet’s test was standardized for the American, after testing with American participants.

The Stanford University applied the standardization and so this new test became known as Stanford-Binet test. It was adopted in 1916 and it soon became the standard USA i8ntelligence test.

The result of the test is expressed with a single number, which what we all know as Intelligence quotient or IQ.

In the time of the First World War, United States army had to test an incredible number of recruits.

For their purpose were developed tests known as army alpha and beta tests. These were different tests for different groups of recruits. The first one, Alpha, was a written test, while the beta one was consisted of pictures.

The difference was made so that non-English speaking recruits and those who did not know how to read could apply.

These tests remained in use after the war has ended, out of the military practice. One of the very unfortunate applications of the tests was on immigrants.

We could safely say tests were misused, since they lead to nationalities’ generalization and supported all kinds of restrictions and sweepings of the immigrant population.

He thought of Stanford-Binet test as very limiting, so he invented an upgraded version, from then known as Wechsler Adult Intelligence scale or WAIS.

This revised version is made of ten subcategories and five additional tests. This is quite an elaborated test that measures different areas of human intelligence, four of them, to be specific.

The average score is fixed at 100. We will not go into details on how scores are obtained in different tests. There have been many controversies related to the question how the intelligence is being measured.

IQ testing opens many questions, from race and nation factor as important in testing, to male or female differences and many more.

What is an average IQ score?

Better question would be what an average score means to an individual. The question of average intelligence is important for understanding all other levels of intelligence as measured by IQ tests.

What if you get an IQ score around 100? These results possibly have many limitations in terms of understanding what they actually mean.

An average IQ score indicates average problem-solving skills and reasoning abilities, but most of psychologists agree that such information is insufficient. The thing is that an average IQ result actually does not reveal an individual’s full abilities.

In other words, it does not really tell what you are capable of.

Good example is this: a person with an average IQ could be a master musician, an extraordinary artist or one possessing incredible mechanical skills, for example. This means that an average IQ does show one’s ‘above average’ neither practical skills nor their inborn talents.

There are many traps in IQ test results. In addition, research shows that an average IQ could be changed over the years.

Results could vary up to twenty points, which is a considerable change. There are other factors that could greatly affect IQ score or its actual manifestation. Emotional intelligence seems to be of major importance. It is sometimes marked as EQ.

Some experts even claim that EQ is more important than IQ, in terms of succeeding in life.

While higher IQ certainly is an advantage, it is not a guarantee. Emotional intelligence seems to play quite a role. Even if you do not know much about it, it is very logical to assume that pure reason cannot do well without emotional balance, to put it very simply.

There is no need for concern if your IQ is around an average score.

Even lower IQ is not an indicator of failure in life, just as the high IQ does not mean one would pick the fruits of success. Many other factors determine these things, such as dedication, hard work, persistence, emotional sensitivity and so many more.

Attitude towards life seems to be bound with the IQ, but it also affects one’s chances regardless of their IQ score.

Now let us see what standardized Intelligence Quotient score mean in real life. IT is actually the most important thing about IQ scores. While it might sound cool to be labeled as a genius and have a score above 140, it does not guarantee success or so.

Let us find out what the scores mean and how they reflect in actual life. These are description of IQ ranges and their manifestations in real life.

IQ Score below 20 stands for profound retardation. So low IQ is found in people who are physically handicapped and sadly of short life expectancy. They cannot be on their own and cannot learn to perform even the simplest tasks.

IQ Score between 20 and 34 stands for severely retarded. They cannot do well with some basic tasks related to human intelligence.

Learning language is difficult. They could however learn basic self-care, but are mostly highly dependent. This low IQ is most commonly a result of a brain trauma during pregnancy or at birth or sometimes very early in life.

This is not inherited state, but acquired. IQ Score between 35 and 49 stands for moderately retarded.

Moderately retarded individuals are capable of learning simple skills and could be employed, under specific circumstances. Those people are not socially mature, but they could have self-awareness.

Intelligent animals, like dolphins, chimpanzees, crows and other ‘gifted’ ones are usually around this range. The next IQ score measures between 50 and 69 and it stands for mildly retarded.

Mildly retarded individuals are capable to care about themselves; they could do routine jobs, but need to be watched over. These people could even live alone and do well about themselves, but the best is if they have assistance.

They are socially adaptable, although immature. They have no physical deformities in the most cases. This IQ score is a variation of ‘normal’ intelligence, since not caused by any damage, but genetic factor.

Borderline retardation reads at IQ Score between 70 and 79. They usually have problem with everyday tasks, such as using everyday appliances. Employable, but their training ability is limited and they do best under supervision.

Score between 80 and 89 is considered below average. They do well, if there were no issue of choices. For example, they could do food service.

Violent males do not have to be within this range at all. So we come to the average IQ range, which is between 90 and 99.

People of an average IQ are capable of learning and making decisions. They could do variety of jobs.

For example, an average IQ person could be a good police officer, a sales manager, clerk or else.

Theoretical studies, in terms of education and such are an opportunity from the average IQ range and up. IG Score of 100 to 109 is also considered average and it is what most of people take as average.

IQ Scores between 110 and 119 are considered above the average. At this level, an individual is ‘ready’ to step up a ladder in educational terms. It is safe to say that bachelor Degree corresponds with an above average Intelligence Quotient.

The next ‘level’ is IQ Score between 120 and 129 and it is also considered above average. This one corresponds with Master’s degree.

Finally, we come to the IQ 130 Score. Intelligence quotient Score between 130 and 139 stands for what is called ‘gifted’. This is definitely a range above the average and it adds a bit more to it.

The very label ‘gifted’ implies there have to be additional skills or talents. It is important to note that most of the regular Intelligence quotient tests are not reliable in terms of results higher than score 130-139. These are considered high-range ones.

From this point on, high-range specific tests are needed to identify IQ ranges. IQ 130 is an intelligent and possibly highly imaginative person.

This range usually corresponds with PhD in what is considered soft scientific fields. They are capable of writing original texts and articles, possibly novels.

People within the range of 130 to 139 are sometimes considered moderately gifted, while those above are highly gifted.

What having an IQ score within this range highly varies. Just as we have said, there have to be other factors affecting the whole personality, which result in choosing certain path in life, succeeding or whatever else.

Remember what we have said about violent males within the below average range; you have most certainly hear, read or seen examples of highly intelligent people, considered ‘genius’, who committed gravely violent crimes.

IQ 130 Score manifests differently in different individuals. Let us give some examples.

A person with IQ 130 could be extremely verbally gifted and quick minded, capable of learning algebra at an early age and could have very philosophical approach to life.

On the other hand, they could be excellent logicians, capable of solving complex problems, but not very quick. Some are rather highly intuitive than smart, speaking in colloquial terms.