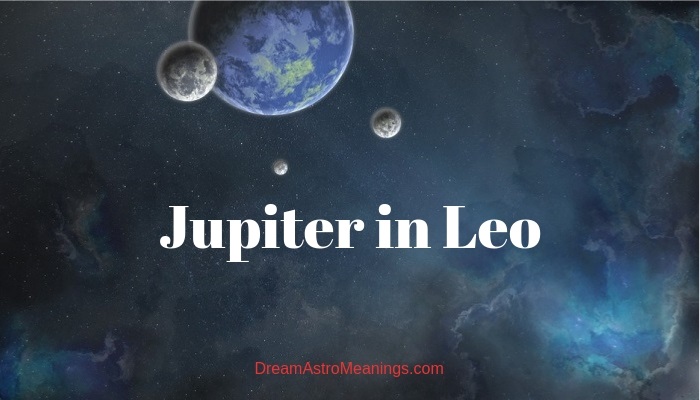 Jupiter, or as it was called in ancient times, “the great benefic”, is the largest of all planets in our Solar system. This planet is composed mostly of hydrogen and doesn’t have a solid surface.

The Roman god Jupiter gave its name to this planet. Jupiter was the chief deity in the ancient Roman pantheon. He was the king of all Roman gods, and ruler of the skies and thunder.

The planet Jupiter is the most fortunate of all planets and brings the best things into our lives.

The planet Jupiter rules Sagittarius and is exalted in the sign of Cancer. In these signs, its influence is the strongest.

It usually has a good meaning unless it is very badly placed in the natal chart of an individual, especially if it makes bad aspects with other planets in the chart. In that case, the person doesn’t have a fortunate life and doesn’t have many opportunities for progress and success.

Their life, especially their finances are burdened with struggles and survival rather than thriving. They could encounter many difficulties on their way to earning money. In a favorable placement, Jupiter brings miracles into a person’s life.

These people are protected by harm and are usually financially secured and many of them have great wealth.

Jupiter goes through one sign during a period of one year. That means that all people born within that period have Jupiter in the same sign, and share its traits. That is why Jupiter is considered a social planet because it has influence over generations of people, and not so much on individuals.

Unlike social planets, personal planets like Sun, Moon, Venus, Mercury, and Mars, take significantly less time to go through a sign and their impact on a person’s character is enormous.

Because of this fact, Jupiter in a natal chart and its influence over an individual should be observed as a combination of its sign and house placement as well as the aspects it is making with other planets.

In this text we give some information about the traits of people with Jupiter in the sign of Leo.

Jupiter in Leo men are self-confident and love to show off.

They love to be in the center of attention, but people are naturally drawn to their powerful and magnetic personalities and their confidence. They usually occupy leading positions because of their leadership abilities which make them leaders in all occasions.

These men are often very successful and wealthy. They are usually very generous and tend to share their wealth with those in need. Because of their generosity and tolerant nature, they are often the target of people with bad intentions who want to use or manipulate them in some way.

They are very successful in all areas ruled by Leo, and these are often related to the public eye. They are good at marketing and public relations, as well as actors, musicians, CEOs of big companies, etc.

Wherever they are they love to feel the admiration and respect of people around them. They usually love to brag about their accomplishments and their qualities. These men always talk the best about themselves and never admit possessing any flaws.

When Jupiter in their natal chart is badly positioned and aspected, these men can have a tendency to jeopardize their finances through overspending or through games of chance, like gambling and similar activities.

They can also be overconfident and proud, with a tendency to brag a lot.

Women with Jupiter in Leo are very confident and love to be in the spotlight. They are often very loud and enjoy bragging about their accomplishments and qualities. They always seem to do everything best.

Regardless of their bragging tendencies, these women are much loved and appreciated by their surroundings. People admire their personalities and confidence and are naturally drawn to their optimistic energy.

These women like men with this placement often occupy leading positions.

They are also good presenters and organizers. They are good for marketing and public relations and these are the fields where they usually choose to establish their careers. These women are usually a pleasant and fun company.

Most of them possess a good sense of humor and people love being in their company.

They can sometimes be overly proud and confident with a tendency to brag about everything and that usually happens with badly positioned and aspected Jupiter in their natal chart.

In these cases they can also have a tendency to spend beyond their means and jeopardize their financial stability.

Some of the good traits of Jupiter in Leo are:

Some of the bad traits of Jupiter in Leo are:

People born with Jupiter in Leo usually have leading positions in life. They are very authoritative and dominant personalities. These people usually believe that they deserve only the best in their lives and usually manage to achieve such a lifestyle.

With Jupiter in Leo, these people are usually very generous and tend to share selflessly the benefits they are blessed with.

They usually have more than enough and it is easy for them to be freehanded. They often have a strongly developed ego, and they need admiration and gratification of their work to boost it. They are usually self-confident, but love to be admired still.

Sometimes these people can be very egotistic and self-centered, always want to be in the center of attention, and irritate people from their surroundings with these traits.

This position of Jupiter is not very powerful but it enables these people to achieve the success they strive for. These people often have megalomaniac ideas and plans, and always look for more. Everything has to be grand with these people.

They have confident personalities but people are naturally drawn to their leadership skills and accept them as their leaders. They usually become leaders in all social groups they belong without the need to put in the effort.

These people are proud and demand to be respected.

They often have the need to brag about their deeds, and love to be praised for their accomplishments. They often exaggerate while talking about their achievements and many people dislike this trait they have.

Others are admiring their attitude and that often puts them in positions of honor and accomplishment. They are great at self-marketing. They never talk about their flaws and always use superlative to express their qualities.

These traits make them excellent at marketing other people and products as well. They can be very successful in the public relations area and they often choose to do exactly that.

They are good at presenting things and know the exact words to use to make people believe in what they are saying. They have a great influence on people who admire their appearance.

These people are often in managerial positions and are often very tolerant and generous towards their employees.

They could easily manipulate them and use their kindness and that is why they need to be careful and not to allow that. They have a forgiving nature and usually don’t hold against people the wrongs they suffered from them.

They enjoy spending money on others and that is a great danger to their finances, especially if they deal with malevolent people whose only purpose is to take advantage of them.

They tend to gesticulate a lot while talking, which adds to the overall impression about themselves. These people are talented actors and often choose a career in that area. They are also good as sportsmen, TV personalities, directors, high government officials, etc. They manage to get along well when they are in the spotlight.

These people are good at organizing events of different kinds. People love to attend their gatherings because they know that they will have a great time there.

These people are natural optimists and have a gift to share it with others. They are funny and interesting, and people enjoy being in their company. Whatever event they are hosting, it is certain that it is going to be good.

They feel natural and at their best in a leading role. They often have acquaintances highly positioned in society and they themselves often occupy such positions. They love being in the center of attention and they often do everything to attract it.

These people can be very successful and have great opportunities for achievements in all Leo ruled areas. In some cases, with Jupiter badly placed in their natal charts they can be overly proud and confident, narcissistic, vain, and tend to dramatize everything.

These traits can cause problems in their life and with people in general. With bad aspects, they could be prone to spending more than they could afford and jeopardizing their financial situation.

Jupiter is a planet which travels through one sign of the zodiac in around a year. That means that all people born during that transit have the traits of Jupiter in that particular sign.

Because of that, if we want to determine the exact influence of Jupiter in a person’s life, beside the sign Jupiter is in, we need to incorporate into our interpretation also the position in a particular house in the natal chart of the person, as well as all the aspects Jupiter is making with other planets.

People with Jupiter in Leo are open and optimistic. They usually want to be in the center of attention and often purposefully bring that attention to themselves. People admire their attitude and confidence.

They usually have a magnetic personality which naturally attracts the attention of people and makes them want to follow these people. They have inborn leadership abilities and are often in leadership positions, as leaders of groups, managers, CEOs of companies, presidents, etc.

They usually aim high and reach high in life. All areas ruled by Leo are the ones they have special support by the Universe through great opportunities for progress and achievements, as well as financial gain.

These people are usually financially well-off, but if Jupiter is badly placed in their natal charts, they can be prone to overspending or even gambling.

They can also be prone to bragging way too much, be overly confident or vain, which could jeopardize their chances for success, and cause people to dislike them.

These people are excellent organizers of different events and gatherings which people enjoy visiting. They are fun and have an excellent sense of humor, and people are naturally drawn to be in their company.

If Jupiter is well placed in a person’s natal chart, it usually creates people who choose to be in the public eye and earn money through professions such as marketing, music, public relations, movies, politics, etc.

Whatever they choose, these people have the charisma and the qualities to succeed and remain successful.

They can also expect substantial financial gains from all their engagements.