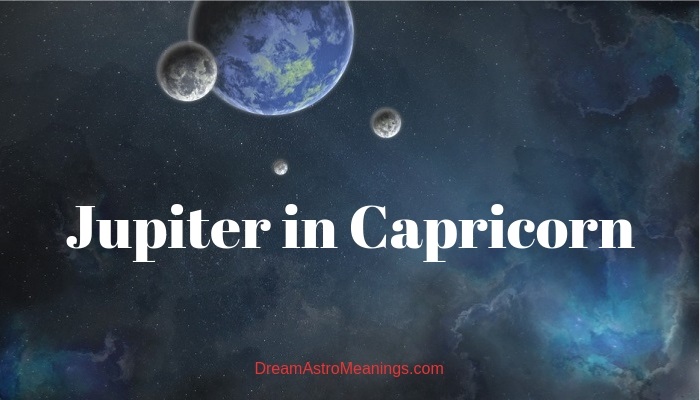 The planet Jupiter is a very big planet. In fact, it is the biggest one in the Solar system. It is made mostly of hydrogen and doesn’t have a solid surface.

This planet bears the name of the Roman god of war and the sky, Jupiter. This god was king of the gods in the Roman gods’ pantheon and was considered the main deity in the Roman Empire until Christianity became the main religion, replacing old pagan beliefs and deities.

Jupiter is considered the bringer of good fortune and wealth since antiquity. This planet was known as the great benefic among other planets, and it was considered that if well placed, it could bring tremendous wealth and fortune into a person’s life.

The planet Jupiter rules Sagittarius and is exalted in the sign of Cancer. In these signs, this planet has the most power and all its positive traits are heightened to the maximum. In Capricorn, this planet is in its fall, and its power is diminished.

This planet, if well placed in a person’s natal chart, usually provides this person with excellent opportunities for progress and gaining financial stability.

Such Jupiter protects the person through lucky circumstances and eases dealing with their financial affairs.

If badly placed, it usually doesn’t bring disastrous events in our lives (although it might), and usually creates obstacles and lack of opportunities for progress and financial growth. People with badly placed Jupiter seem to lack good fortune and opportunities to use their abilities and create a stable financial situation for themselves.

In comparison to the personal planets, Sun, Venus, Moon, Mars, and Mercury, Jupiter is considered a social planet because it has more influence over generations of people than on individuals.

The main reason is the fact that it travels through one sign during a period of one year, thus influencing all the people born within the period of that year.

Because of that, the placement of this planet in different signs does have an influence on individuals, but to get the true picture of its influence, the interpretation should be combined with the position of Jupiter in a specific house of a natal chart and its aspects with other planets.

In this text, we give you information about the traits of people born with Jupiter in Capricorn.

Men with Jupiter in Capricorn are usually very reliable and responsible. They are very organized and make detailed plans of their activities to ensure they get the result they desire.

These people are serious and many consider them boring because of their rigid and calculated approach towards doing their duties, but these men are not bothered by other people’s opinions about them.

They want to make sure their work doesn’t have any mistakes and that is why they go to great length to ensure its success.

These men are aware that they cannot rely on good fortune, and that their work relies solely on their efforts. That is why they don’t waste time. They know they need to be patient as well as determined to accomplish their desires. They know the value of their work and want to be appropriately paid for the job well done.

A good way to ensure their progress, success and financial stability is to invest their time and efforts into areas governed by the sign of Capricorn.

They can become architects or economists and use their knowledge to increase their finances. They can expect wonderful opportunities for progress and success in all these areas.

With the help of Jupiter and their effort, they don’t have to fear about their financial future.

Women with Jupiter in Capricorn have similar traits to men with this placement.

They are also serious and thoughtful in their approach to work and dealing with different situations. They are not spontaneous and people often consider them calculated, and they usually are because they want to make sure they don’t make any mistake and their work is well done.

These women are very responsible and organized and they often make organizing, their job. They are also interested in other Capricorn related areas, such as civil administration, mathematics, trade, real estate, economics, architecture, farming, counseling, a career in the government bodies, etc.

Every job they do, they do it with great care and attention to details.

They are considered very responsible and reliable. Their superiors know that they can rely on them and expect the work to be done in an excellent manner. They know the value of their efforts and work, and they expect to be accordingly paid.

Like men with this Jupiter placement, these women are aware that for them to be successful and have the amount of money they desire, they need to put in the work and be patient.

They cannot rely on luck like some people, but they know how to charge well for their services.

Finally, they manage to end up with a substantial amount of money which enables them to be relaxed and secured in the future.

Some of the good traits of Jupiter in Capricorn are:

Some of the bad traits of Jupiter in Capricorn are:

Jupiter in Capricorn makes people born under its influence traditional and conservative.

These people have a very organized approach to their wellbeing, work, and finances.

They don’t like to experiment and usually play it safe. They usually plan their steps ahead and don’t let others rush them into doing things they didn’t think through enough.

People with Jupiter in Capricorn are patient and thoughtful. They usually have goals which are realistic and possible to attain. They don’t mind climbing slowly up the stairs of success, as long as they get where they want.

They are not blessed with great luck as some other people, and they usually need to work hard for their achievements, but they have a mindset which enables them to go through any difficulty without discouragement or stepping back.

These people are usually very serious and reliable.

They often cannot understand people who take things lightly, but they might end up envying these people because they seem to get everything on a platter without putting in much effort, while they need to put in much work into every achievement without knowing if it would turn out to be successful.

They don’t understand what spontaneity is and usually need to be well-prepared before they begin doing something. Even though many people could consider them boring these people instill confidence in others who find them extremely reliable and trustworthy.

When these people put their mind into something they put in efforts and determination to accomplish it. They might be slow, but their actions usually end up being successful because they stick to their goals and usually don’t give up before they are finished.

They are very thorough and their deeds often last beyond them.

They know the value of money and their work, and demand to be adequately rewarded for their efforts and the work well done. Although Capricorn is not the most fortunate position for Jupiter to be, people with Jupiter in Capricorn make sure that their hard work provides them with financial stability.

These people know that they need time and patience before they achieve their long-term goals. Their success doesn’t come overnight, but they are willing to wait. These people don’t give up because of the obstacles they encounter.

Challenges and difficulties only make them more determined to succeed. They are enduring and persevering.

In these areas they can expect fortunate opportunities for growth and satisfying income.

Many people find them overly conservative and predictable, but they don’t care. Their approach ensures the success of their actions and that is the only thing they care about. After some time, these people manage to gain substantial wealth and security for themselves and their families which is their final goal.

Some of these people can be motivated by climbing up the status ladder and gaining power and their determination and persistence often take them where they want to be.

Although nothing falls from the sky for them, they manage to achieve more than many people who simply rely on their luck and don’t put much efforts into their endeavors.

In bad aspects and poorly positioned, this Jupiter could cause delays and problems in accomplishing their plans and goals, and doing their business.

Jupiter in signs doesn’t have as great importance and influence on an individual’s personality as the influence the personal planets have. The reason is its long stay in one sign, which makes it influence generations more than individuals.

All people born within a year, which is a period that Jupiter stays in one sign, share the traits of Jupiter in that sign; that is why it is important to consider Jupiter’s placement in the natal chart as well as the aspects it is making with other planets as well, when we want to determine its influence on some person.

People who have Jupiter in Capricorn are well organized and determined to succeed in accomplishing their goals. These people are persistent and don’t let difficulties discourage them.

They know that they cannot rely on good fortune to help them achieve their dreams so they focus on putting in efforts to get where they want to be.

They are serious and don’t like to waste their time. Their success comes after a period of struggle, efforts, hard work, patience, and they know they need to start as soon as possible.

They are respected by their coworkers and superiors because of their responsible approach to work and their efforts put into ensuring the success of their endeavors.

These people slowly progress towards their goals, but they are determined to get there and never give up. Challenges only inspire them to fight and continue pursuing their goals.

They know the value of their efforts and demand to be accordingly paid. They usually start from bottom positions but slowly progress towards the top.

Some of them reach leading positions and attain great wealth. They often go from simple workers to business owners. Their road is not easy, and they don’t get much help along the way as some other people, but they usually manage to achieve great success and substantial financial assets which is one of the main reasons for their effort.

In rare cases, when Jupiter is badly placed and aspected in their chart, they can encounter serious financial trouble and difficulties, and experience financial losses they won’t be able to resolve fast.