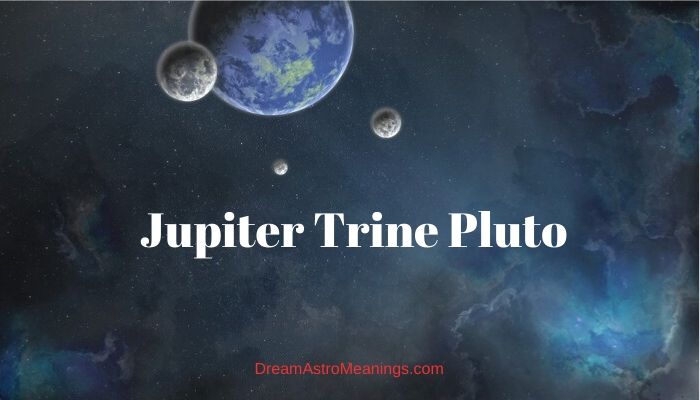 Astrology analyzes planetary positions and their relationships to determine the personal traits of individuals and to predict the future they are likely to experience. Astrology is an old practice, originating in ancient Babylon. Its accuracy has been proven many times throughout history.

The aspects between planets in the natal chart give a lot of insight about someone’s personal traits and the events they could go through in life.

The aspects form when the planets are at certain distances from one another.

The main or major aspects are the most important for the analysis, although many astrologers use minor aspects, especially if they are exact.

The major aspects are conjunction, sextile, trine, squares, and oppositions. Some aspects have harmonious and beneficial nature while others have challenging nature.

The first group enables the free flow and cooperation of planetary energy, while the other group creates obstacles and blocks the energy of the planets.

Trines are harmonious aspects, formed when there is an angle of 120 degrees between planets. They bring good fortune and opportunities for progress.

Relationships between people and their potential could also be analyzed using astrology.

Synastry is an astrological technique that does that. It compares the natal charts of two people and calculates the aspects between the planets. It also observes the placements of the planets in the other person’s natal chart.

These houses where the other person’s planets fall reveal the areas where this person will influence the owner of the natal chart.

The aspects between the planets of two people and their nature, reveals a lot about their relationship. Harmonious aspects tend to stabilize the relationship and indicate that the partner’s characters are compatible.

Both of them have a desire to put in efforts to maintain the relationship and enable its growth. They settle their disputes on time and don’t allow issues to grow.

If the aspects are predominately inharmonious, they create tension and conflicts between the partners. It takes a lot of patience and making compromises to maintain such a relationship. This relationship lacks mutual understanding as well as basic compatibility.

The planet Jupiter is the largest in the Solar system. It’s mostly made of hydrogen and doesn’t have solid surface. Jupiter was the ancient Roman king of the gods. He was the sky god, and a much worshiped deity.

Since ancient times this planet was considered a lucky one, and a bringer of fortune in people’s lives.

This planet is still the luckiest of all, and enables people succeed in their endeavors and fulfill their desires. It provides financial security and good opportunities to gain money.

A well-placed Jupiter in a natal chart is a blessing and usually guarantees financial security, wealth, and success.

This planet rules Sagittarius and its exaltation is in Cancer. In these signs it is most powerful. In Capricorn Jupiter is in fall, and its energy is lowered.

Even when it has challenging aspects to other planets Jupiter usually doesn’t bring catastrophic events (although in some cases it can, and they are usually related to the persons’ finances). In harmonious aspects, Jupiter brings fortunate opportunities and wealth.

It is a social or generational planet and it influences generations of people born during Jupiter’s transit through the same sign.

Pluto lost its planetary status some time ago, and is now considered a dwarf planet. The reason is lack of traits which are necessary to be considered a true planet. In astrology, however, Pluto is still considered a planet.

Pluto is a powerful energy and its influence is transformative and destructive. It influences generations born during the transit of Pluto through the same sign. Pluto initiates major changes and transformations both in the lives of individuals and the society in general.

The god Pluto was the god of the underworld for the ancient Romans. In astrology, Pluto rules death and dying, as well as rebirth, regeneration, and transformation. It rules our soul. It is also the ruler of waste and the rotting process.

Events influenced by Pluto usually cause major transformations in people’s lives. These events usually happen when Pluto is triggered by a major transit or progression. Pluto’s influence is mostly felt by people who have Pluto as their ruling planet.

These people are usually very intuitive and able to see through people’s intentions and even read their thoughts. Pluto is fascinated by mysteries and secrets and enjoys uncovering them.

Its placement in the natal chart reveals the areas where it will influence the person and initiate Pluto ruled events.

If Pluto is making challenging aspects with other planets, it is possible that the events will cause a devastating effect on the person’s life. If Pluto is well-placed in the natal chart it will still bring changes and transformation but they will have a clearing and beneficial effect for the person’s future.

Pluto people can experience problems with control issues. They could either be prone to controlling others or be controlled by someone.

Pluto teaches them to change and get rid of these negative traits.

Jupiter trine Pluto between the natal charts of two people creates a supporting bond where the two partners inspire and support each other in the pursuing of their goals and dreams.

These two have similar philosophy of life, and even when they have differences in opinion, they respect and support the partner’s different point of view.

As a couple, they are able to come to brilliant ideas for making money and building their financial security and future together.

Both Jupiter and Pluto rule spirituality which makes both partners inclined towards developing their spirituality further. They will both open new horizons in each other and as a result expand their knowledge on many subjects.

Jupiter will evoke a desire to travel and meet new people as well as learn about new cultures in their Pluto partner.

Pluto will introduce Jupiter into a world of secret knowledge and teach him how to use it. Pluto will inspire Jupiter to undergo a huge personal transformation and change his beliefs and ideas about many matters.

Pluto might encourage Jupiter to use his capacities to begin making more money and/or even start his own business.

This prosperous aspect could bring these two large sums of money and money increase regardless if this is a romantic or a business partnership.

They could make some great accomplishments together. Jupiter rules increase and Pluto rules transformation. That is why this aspect indicates major transformations in both their lives and improvements for the better.

Pluto will be able to offer Jupiter a lot of emotional support during his achievements. This might be his role in Jupiter’s success that will benefit them both.

Like Jupiter, Pluto is intrigued by faraway places and exploring the unexplored. These two will both have their desires fulfilled through this partnership.

They might often travel together to distant and places where they will learn things about new cultures. They might choose destinations where they could also work on developing their spirituality.

Jupiter admires the depth of Pluto’s emotions and their sincerity. Pluto is not afraid to speak their mind, and Jupiter has the same approach.

They are both brutally honest and that is what prevents issues from piling up in this relationship. They say whatever bothers them instantly. Both partners cannot keep their mouth shut about the things they dislike about their partner.

As a couple or in a partnership, these two seem to attract fortunate opportunities to fulfill their desires, earn money, or discover new ways to expand their spirituality.

They have many things in common. They both like similar things and they don’t need much time to decide what to do next.

Pluto loves Jupiter’s independence and won’t have the need to control him. Pluto is aware that Jupiter won’t allow being controlled and admires and respects their strength.

These two understand each other very well. Pluto will know exactly what to say to push Jupiter further towards achievements. Jupiter is the more open of the two, and might help Pluto, who can be a bit closed off to open up to people and broaden his experiences.

They easily adapt to each other’s needs. Pluto will help the Jupiter person to realize his true potential and encourage him to go after his most ambitious goals and desires. Success is guaranteed when Pluto supports someone.

He will be there with excellent advice if challenges and obstacles arise. Jupiter feels invincible with his Pluto support by his side.

This is a relationship of friendly support, respect, and appreciation and this aspect has the ability to annul the effects of some other challenging aspects between these two.

When someone’s Jupiter makes a trine aspect with another person’s Pluto, this is a very fortunate aspect for their relationship.

It creates trust and support between the partners who might encourage and help each other overcome their insecurities and go after their goals. They are able to give each other priceless advice and help them deal with some current issues.

Jupiter and Pluto are spiritual planets and these people have as their important focus developing their spirituality. They will support each other on this path.

They will enjoy traveling together to distant places, expanding their consciousness and knowledge about the world and different cultures and people. They might travel to expand their spirituality and these can be very rewarding experiences which bring them closer together.

Their mutual business projects and endeavors aiming to make money and provide their financial future will usually be successful. They are talented for finding ways to make money and they can be very prosperous when they join forces.

This is a relationship where the partners admire and respect one another and is likely to help the stability and longevity of this partnership.