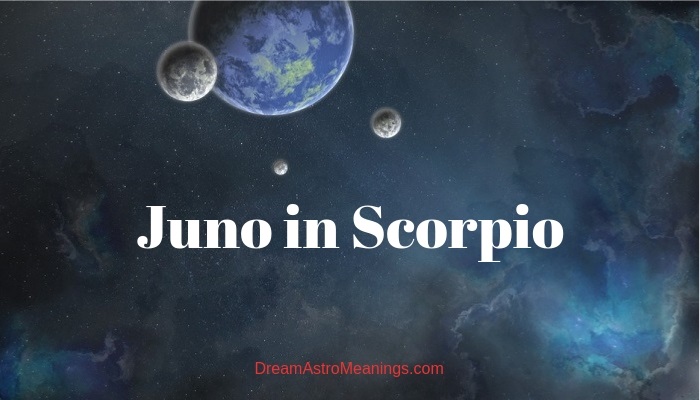 After the discovery of the asteroid Ceres in 1801, many others were discovered and are still being discovered by astronomers all over the world. The third discovered was the asteroid Juno, in 1804, by the astronomer Karl Harding. Asteroids were first considered planets, and were later reclassified as asteroids.

Juno the asteroid got its name from the homonymous Roman goddess. Juno was Jupiter’s wife, and Jupiter was the king of goods which made her the queen. She was a loyal and devoted wife, regardless of the fact that her husband didn’t deserve it due to its numerous affairs and infidelity.

Juno was considered the ideal wife. She was the goddess of marriage, childbirth, women’s sexuality, and she was also the patron of Rome.

Juno exhibits the energy of the planets Venus and Pluto, and the signs of Libra and Scorpio.

Juno’s position in our natal chart is very important and we should be aware of its meaning and significance. Juno often indicates the areas where we have a potential for growth and prosperity.

Juno symbolizes our desired long-term relationships and marriage qualities and describes the traits of our ideal long-term or marriage partner.

This is a very important asteroid in relations to marriage and long-term commitments and it should not be overlooked.

Its aspects between the charts of two people attracted to one another are significant and often indicate a potential long-term relationship or marriage between them.

Soulmates often have significant Juno aspects between their charts. Juno gives us details about our future commitments and marriages.

Juno makes us aware of the traits we are looking for in an ideal partner. We are usually not aware of these traits because we are most of the times blinded by the partner traits desired by our natal Mars and Venus.

People typically make their partnership choices based on the level of physical or emotional attraction they have for a person. While Mars shows our passion and the intimate needs in our relationships and Venus reveals our emotional needs.

A relationship or marriage based solely on physical attraction or romantic feelings doesn’t have much chance of lasting. The reason is that the person we are attracted to might not possess the traits we need for a long-term commitment.

This person might be irresponsible or a spendthrift, he might have an addiction, or he is prone to cheating, which could all be traits we consider deal-breakers for a committed relationship.

Juno shows the traits our partner should possess for the relationship to be lasting. It describes the perfect person we could imagine spending our lives with.

That person is someone who accepts us and loves us unconditionally, without the need to change anything about us, and we feel the same way about that person.

We should not forget that Juno, the goddess, was a woman who was desperate because of her husband’s betrayals. She was insecure and her confidence and self-esteem were ruined.

Because of that, Juno in our chart also describes our insecurities and doubts. This asteroid indicates which situations and circumstances could provoke our suspicions and make us restless in regards to our relationships.

Juno also reveals the circumstances and situations we consider deal-breaking for our relationship, but also the things we are ready to tolerate in a long-term commitment which could eventually lead to the ending of the relationship.

Juno shows our tolerance in relationships and indicates our ability to patiently wait for the right relationship opportunities.

Juno should be well-studied in everyone’s chart, through its sign and house placement, and the aspects it is making because it gives us the essential clues for recognizing the right traits of a partner we potentially consider committing to.

If we begin listening to what Juno has to say, it is not likely to make any more relationship mistakes which could lead to disappointments and sorrow.

We should keep in mind that the people we are most attracted to usually don’t make our ideal marriage and long-term partners.

It is easy to disregard the red flags when we are infatuated with someone, but Juno is making it easy to recognize these red flags. We should always check if the person we consider dating seriously is matching Juno’s standards.

Juno is helping us realize whether we are only infatuated with someone or they are true commitment material, someone who is supporting, reliable, and willing to work with us on maintaining the relationship and enabling it to last a long time.

Men with Juno in Scorpio can be suspicious and reserved when it comes to choosing a long-term partner.

They are very passionate and desire a woman who is able to respond adequately. Their ideal woman is someone who is mysterious and magnetically attractive.

If Juno has challenging aspects in their natal chart, these men can become obsessed over their partners or very jealous and doubtful of their actions. They could also be prone to attracting women with such traits.

These men need to be intrigued by a woman to become attached to her. In some cases, they could be prone to imposing their opinions onto their partners.

With bad aspects of Juno, these men can be prone to emotional manipulation and control of their partners’ actions and behavior.

They could also be attracting women with such traits into their lives. They could also attract women who are prone to outbursts of anger and aggressive behavior, or they could behave in such a manner in their relationships.

Women with Juno in Scorpio desire men who are confident and passionate.

They desire an intense relationship with the man they choose to spend their life with and someone who excites them.

They are very passionate as well and they desire to establish a strong physical and emotional bond with their partners.

If Juno is in bad aspects with other planets in their chart, these women could be prone to attracting aggressive and violent men into their lives or even marrying them.

Their desire for intensity can often turn against them and cause them to suffer. These women can be very jealous and suspicious of their men.

In some cases, such behavior could be extreme, and they could scare men away with their actions.

They need to learn to control their reactions and stop having irrational and unfounded fears and doubts about their partners’ behavior.

These women could also be prone to emotionally manipulate and in other ways control their men.

They could also attract men who have such traits in their lives. They are attracted by mystery and the unknown, and their men usually fit that context.

People with Juno in Scorpio desire to have an intense relationship with their partner, both emotionally and physically intense. They are very seductive and often magnetically attractive to others.

These people might desire to fully emotionally and physically control their partners or to expect full attention from them.

They cannot tolerate their partner’s resistance and confronting their opinions which causes them to detach, retreat, and in other way emotionally manipulate their partners.

These people seek very passionate and intense partners. They desire to feel a mutual strong physical attraction to their partners.

These people dream about relationships where they will merge themselves with their partners. They can be possessive or they can attract possessive partners in their lives.

They can also be jealous and very suspicious of their partner’s activities, and/or their partners might exhibit these traits.

People with Juno in Scorpio are intense and magnetically attractive.

They desire a partner with whom they could have an intense and passionate relationship which will both be emotionally and physically fulfilling. They can be prone to jealousy and outbursts of aggression and anger.

These people are prone to controlling and emotionally manipulating their partners when they feel they are losing control over them. This usually happens if Juno makes challenging aspects with the planets in this person’s chart.

They can also be prone to attracting partners who exhibit such traits, and they can find themselves in abusive and toxic relationships where they have been manipulated and controlled by their partners.

They are attracted by partners who are mysterious and somehow unusual. They need to be intrigued by their partners.

These people desire a strong emotional and physical bond with their partner and in some cases they strive towards complete merger of body and soul between them and their partners.