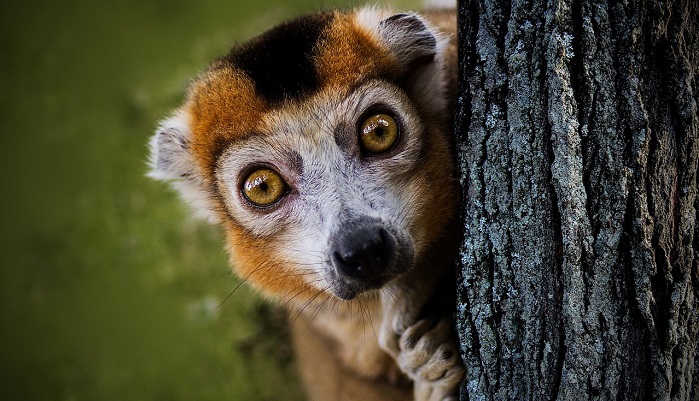 Lemurs are primates, endemic to Madagascar. They evolved independently to monkeys and apes. Before humans arrived on Madagascar Island, lemurs were large as male gorillas.

There are around 100 species of lemurs today. Many of the species are threatened by loss of habitat and illegal hunting.

They vary in size from 30g to 9 kg. They are sociable animals and communicate mainly with their vocalizations and scents. Lemurs don’t share any traits with other primates and that is what makes them unique. They have developed these traits to survive the harsh conditions of the Island of Madagascar.

For example, they seasonally store fat, they can slow down their metabolism, they are active both during the day and at night, they breed seasonally, the females are socially dominant, etc.

Before humans arrived on Madagascar, which was around 1500 to 2000 years ago, lemurs were spread all over the island. Human activities caused them to restrict to around 10% percent of the island area.

They are most endangered, and their extinction is imminent if something doesn’t change drastically.

The already extinct species were all larger than the existing ones, weighing up to 200kg.

Their sense of smell is very good. Smell is very important for their communication, for marking their territory and as a tool to evaluate whether another individual is a suitable breeding partner as well.

They are adapted to conserve energy during the dry season by lowering their metabolism. They have many other traits which enable them to conserve their energy. They also accumulate fat and double their weight.

Their diet is various. The smaller species usually eat fruits and insects, while the bigger species mostly eat plants. When they are hungry, they can eat food they wouldn’t normally eat.

Lemurs spend most of their time in trees. They are social animals and usually live in groups of less than 15 individuals, although their behavior varies depending on the species.

Some species of nocturnal lemurs are solitary hunters but nest in groups of other individuals during the day. In many nocturnal species of lemurs, females with their young share the nests with other females and one male. 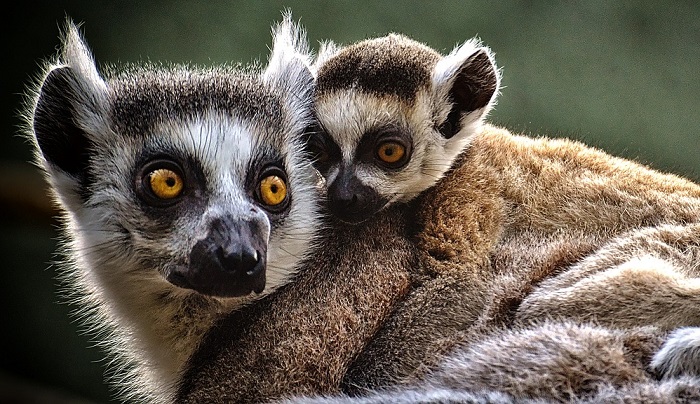 The species, which are mainly active during the day exhibit similar behavior to monkeys and apes.

One of the characteristics which distinct lemurs from other primates and mammals is the female social dominance which is exhibited in many lemur species.

These animals can be aggressive when they are defending their territories, but the level of aggression varies depending on the species.

Lemurs have social grooming like other primates. They do it to strengthen the bonds between individuals and to ease tensions between them. They groom in many different occasions and they do the process with their tongue and specially designed teeth which resemble a comb (toothcomb).

Some species are known to hibernate to conserve energy and water during harsh seasonal conditions.

Lemurs have poor eyesight. They mark their territory using their body secretions. They are very vocal like other primates. They are known for their alarm calls to warn other individuals of potential predators.

They also react to the alarm calls of other species. Their calls can be very loud and can be heard at a long distance, sometimes up to 2km. Some lemur species have contagious calls, where one of them begins the call and others in the area join.

These collective songs can last more than 3 minutes.

Touching other individuals is seen as a submissive behavior often done by younger members of the group towards the older and dominant members.

The grooming among lemurs is a mutual thing. They directly reciprocate the grooming to the individual they received it from.

Lemurs are very sensitive to potential predators and are on a constant lookout. They usually conceal themselves sleeping in secluded places, like nests or tree holes.

They also detect the smell of the feces of a potential predator, using their sensitive noses. They also hide their young when they go out hunting for food. Lemurs also use alarming calls to inform others of a predator nearby.

These animals are seasonal breeders and match the weaning periods with the periods when the food is plenty. Their mating season usually lasts up to three weeks per year. These animals can be monogamous and polygamous, and that refers to both females and males.

They can also mate with individuals from other groups. The pregnancy lasts differently depending on the species from 10 to 24 weeks. Smaller species usually have more than one young, while the large species usually have one offspring. Lemurs carry their offspring or stash them somewhere. Group parenting is common among lemurs.

Lemurs have a long lifespan, of around 30 years and more. They also don’t show signs of aging and are able to reproduce in their old age.

What does a Lemur Symbolize?

The Meanings of a Lemur as a Totem Animal

The Lemur totem has many different meanings. Here are some of them:

Uniqueness. Lemurs are primates which don’t share any traits with other primates. They evolved unique characteristics. The lemur totem animal gives you the gift of uniqueness. It teaches you to be appreciative and proud of your individuality.

Longevity. Lemurs are considered to have a long life-span, and they appear young even in their old age. With a lemur as your totem animal, you could be appearing younger than you are and you are often long-lived.

Alertness. Lemurs are always on the lookout for potential predators. They have special alarming calls to inform other members of the group of danger approaching. The lemur teaches you to be alert for danger and do all you can to prevent something harmful from happening to you.

The Lemur as Your Totem Animal

If the lemur is your totem animal, you are a unique individual. You possess some special traits which make you different from average people.

You are sociable and love hanging around large groups of people.

You get along well with most of the people you encounter, and you love making new friends. You can be a one mate person, but you can also be prone to changing partners.

You are protective of yourself and your loved ones and you seem to smell when some danger or threat is approaching.

What if a Lemur Appears in Your Life?

If a lemur appears in your life, it could be a warning about a potential danger approaching. Maybe you should pay attention to the things and people surrounding you, and try to prevent something bad from happening to you or to your loved ones.

The lemur could be appearing in your life to make you aware of some opportunities which are near you, so you won’t miss them.

The lemur often appears in your life to remind you to have more fun and adventure in your life; life isn’t supposed to be so serious. You need to relax and enjoy more.

When to call on a Lemur?

You should call on a lemur totem when:

Dreams about Lemur – Interpretation and Meaning

Dreams about lemurs can be good and bad signs.

They could remind you of some deception you were a part of in the past. They could also be a warning about a potential danger you need to watch out for.

It could also be a reminder to socialize more and spend more time with the members of your social group.